Posted by Carol Nissenbaum of Suburban Misfit Mom on October 19, 2016 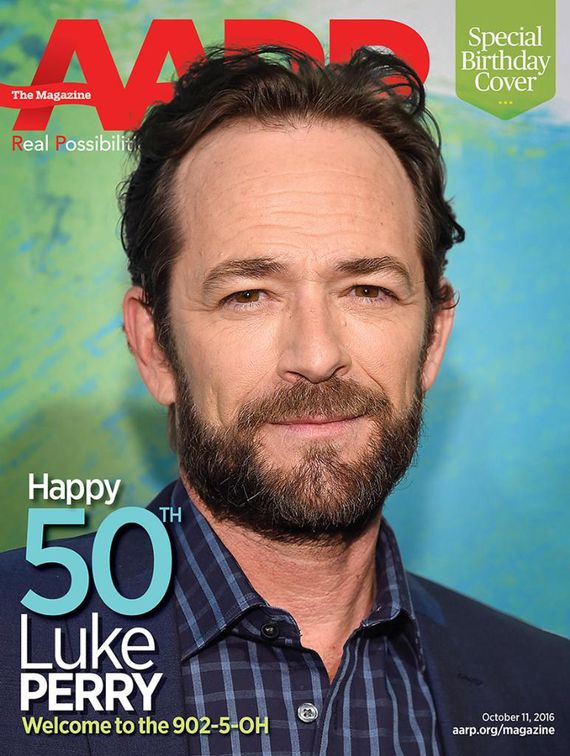 Impossibly, Luke Perry is turning 50. He’s on the cover of AARP Magazine this month, with a scruffy beard and a bunch of wrinkles on his forehead. Those bedroom eyes that once sent millions swooning on Beverly Hills 90210 now sport crow’s feet and look old and tired. The sexy James Dean wannabe (half of you probably don’t even know who that was) now needs to schedule a colonoscopy and a PSA exam. Could Dylan have polyps?

For those of you who may not know, “AARP” stands for “American Association of Retired Persons.” Personally, I believe it stands for “Aggravated And Really Pissed.” Membership starts at 50. Which really pisses me off because who’s retired at 50? My husband is 7 years older than me, so I was granted an early “in” in my early 40s, which made me feel young and smirky. Now I’m about to hit double nickels (55) and I’m long past that honorary member status. In fact, I’m past middle age, unless I make it to 110, which is unlikely.

The newspaper hammers that point home, with a weekly section titled “Act 2” targeted at the over-50 crowd. It features pieces written by old farts reminiscing about the good old days, as well as articles about Social Security, Medicare, wills, and other depressing topics. So, does that mean Act 1 is over for me? I’ve been relegated to Act 2. What will the next section be called: Curtains?

Our old, aging idols are now trying to grab our (dwindling) funds right out of our pockets. Henry Winkler, or Fonzie, as he was known in the 70s (again I’ve probably lost half my readers), now pitches reverse mortgages on TV. Alex Trebek sells life insurance for folks over 50; the cheery premise of the commercials is that poor old Charlie has croaked, leaving his widow with no insurance. Funny Matt McCoy (Lloyd Braun) from Seinfeld has jumped on the bandwagon, selling not-so-funny AARP auto insurance to old and feeble drivers who signal 6 blocks before they intend to turn. Each of these has been jarring but the worst of all? Tom Selleck, former Marlboro spokesman and Magnum PI, is now spokesman for lung cancer (no he’s not); he’s pushing reverse mortgages too. Tom Selleck’s rugged Marlboro Man was such a hottie back then. Now he’s trying to swindle the elderly out of their homes. It’s all too much to bear.

I’ve recently started receiving, unsolicited, a monthly magazine called “Sunset,” or, as I call it, “Death Is Not Far Off.” I’m guessing this is a “perk” of AARP membership. It goes straight onto the recycling pile. It’s an oh-so-happy publication chock-full of laxative ads, high-fiber, low-cholesterol recipes, and makeup that won’t settle into the many lines and wrinkles we old folk have apparently accumulated. Did you happen to catch the Brady Bunch’s Maureen McCormick on “Dancing with the D-List Stars”? Across the country, a collective gasp was heard as people gawked at Marcia, Marcia, Marcia’s 60-year-old turkey neck. She looks beautiful and dances well, but that sagging skin was the talk of Facebook and Twitter. Guess she’s been ruled out as the next spokeswoman for Oil of Olay.

So, this non-retired person, who is aging grudgingly and reluctantly, wishes to slow things down. I was just a young mom, with small children, and tired all the time. How did I get here? When did I become old? Now I’m an old mom, with adult children, and I’m tired from iron-poor blood. I get carpal tunnel syndrome trying to scroll all the way down to the year of my birth on forms. I blame it all on AARP.

My advice? When that red and white membership envelope comes calling, place it immediately on the recycling pile, stream “Beverly Hills 90210” on Netflix, and go get a low-fiber, high-cholesterol snack.