A Girl and Her Cat

Posted by marisa of Suburban Misfit Mom on February 13, 2017 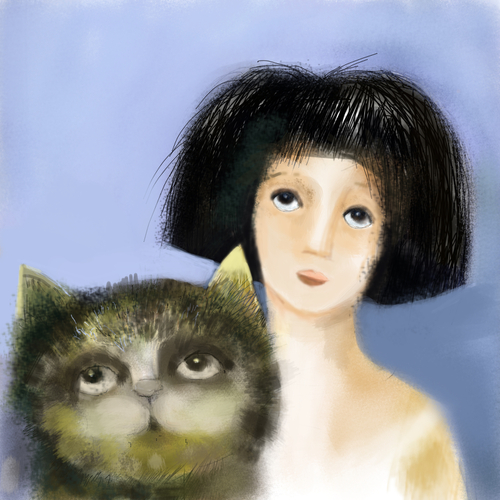 I often joked that my cats were going to be the only grandchildren my parents would have. In many ways, I saw my cats as my babies, though I knew having a baby would probably not be anything like owning a pet. When I brought my daughter home from the hospital I was afraid that I’d have a problem with the harmony of the household. I’d heard rumors about cats becoming jealous and threatening the baby. At first my cat was terrified of the shrill crying coming from the bassinet. The first thing my large Maine Coon (who was bigger than the baby) did when he heard the first cry was run like a chicken out of the room. It took a while of him watching my daughter, evaluating who and what she was to warm up, but it happened. Now it’s like they are a team, and sometimes I’m completely convinced the two of them are plotting against me.

It was just a few short weeks ago that I found myself reflecting on the relationship between my daughter and her cat. I’d just placed my daughter’s hot dog and French fry dinner on her plastic table in the living room before returning to the kitchen to clean up. Less than a minute later I hear, “OH NO,” followed by a huge crash. I ran to the living room and found a scene I could never have imagined. The table was knocked over, and a spray of hot dogs and ketchup decorated the previously clean room. “What the hell happened?!” I yelled in my frustration.

Upon closer inspection I found ketchup on the coffee table, across the floor, on the white shag carpet. My daughter was jumping up and down screaming “It was Aslan! He jumped! He made a mess!” I looked down the hallway to see streaks of ketchup had somehow made their way all the way to the bedrooms. I flew down the hall to my bedroom where I scooped up my gigantic fluff of a cat, and discovered what I’d suspected; his entire belly was covered in ketchup. I dropped him in the bathroom and closed the door before returning to the living room to evaluate the disaster. I apologized to my daughter for yelling before dropping her in her crib so I could clean. As I sat in the living room scrubbing the red stains out of the white carpet, listening to my overexcited daughter yelling from her crib about how the cat made a mess, and repeating the swear word she’d heard me shout, my mind was already on the fact that I’d have to bathe the cat, which would not be any fun.

I finished up and went to collect my daughter, plopping her in front of the television so she’d be occupied while I bathed the cat. Of course, she was not going to stay put. The idea of Aslan getting in the bathtub was too cool to pass up. I ran a warm bath and placed my huge, half red half beige cat in the tub, and to my surprise he didn’t try to escape! Behind me I heard my daughter ripping off her diaper as she made ready to jump in the bath with him. I finished cleaning Aslan up thoroughly before draining the tub and wrapping him in a towel before my daughter could figure out how to jump in with him. I sat on the wet floor and laughed at the sheer ridiculousness of the situation before reflecting on how often my cat and child seemed to love driving me nuts.

For instance, when I clean the litter box Aslan always finds it the perfect moment to drop the worst bomb ever, which leaves me running back to clean it again immediately after before the stench fills the room. My daughter keeps with the same idea. No sooner do I change her diaper than she decides she will immediately soil it two minutes later, and I’m running back to the table to change her again. The same thing goes for naptime. No sooner do I put my daughter down for a nap when my cat decides he needs to stretch his vocal cords, howling to keep her awake; or he hides in her bedroom so we don’t see him, and when we close the door he waits until she seems almost asleep before he starts scratching and meowing to get out, thus ruining her nap entirely. I walk around the house vacuuming up my cat’s ever shedding fur and food granules the same way I rush around cleaning up after my daughter’s crumbs, toys and clothing. Sometimes the two of them together can be maddening. My daughter spills a drink and I turn around to find the cat puking on the floor. It’s a never-ending cycle.

Often I think, “They are driving me crazy. I don’t need a second kid. I have a cat,” because in a way they are like siblings; not only in the way they drive me nuts, but in the way they interact with one another. I watch as my daughter fits doll hats onto Aslan’s head, or takes out her doctor kit to check his heartbeat or give him a “shot of medicine” and my heart melts seeing the love they have for one another. I’ve never seen a cat act so calmly around a child; especially one who is so bent on making him a playmate. I watch the way he snuggles next to her on the couch and hear her delight as she says, “He gives kisses,” after he licks her hand. I’ll never forget the day I watched her put her arms around him and tell me, “I love him”.

While sometimes I feel overwhelmed and think what a pain in the ass it is having a pet, it doesn’t take long for me to realize that the cleaning, the howling, scratching, and the overall craziness are a small price to pay for the joy he’s given my family. I watch my daughter’s eyes light up when she feeds him treats, or when he lays next to her on the bed as she watches television, and can’t imagine our lives without him. I know that someday he will pass on as pets do, and it will be probably one of the hardest lessons I will have to teach my daughter; the lesson that sometimes those we love die. At eleven years old he shows no signs of slowing down, and I’m hopeful we will have several more years with him in our lives. For now, I look forward to snapping photos, telling stories, and committing to memory those special moments watching my daughter chase her live lion around the room like buddies, siblings, friends; a girl and her cat.