Posted by Tiffany Layne of Suburban Misfit Mom on December 12, 2016 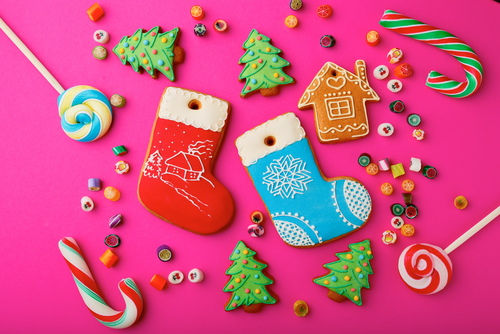 Last week I had the privilege of seeing Dolly Parton live in concert. It’s funny, I didn’t even realize how many of her songs I loved until my mom told me she had tickets and then I started to count them in my head. There’s something so real about her, even if she’s full of plastic. She’s got a platinum personality and all her sparkles come from within. 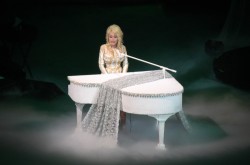 It was so nice to do something like that with my mom. It was the first time since I’d become a grownup that we’d been to a concert together- kind of a special way to kick off this holiday season. She told so many stories of what it was like to grow up in a big family without much money. She shared all her beautiful memories of her mama and daddy and I found myself saying “I sure hope my kids have stories like that to tell someday” because we certainly have a big family with only a little money!

I think that’s the goal we all share- we all want to leave our kids with beautiful memories of the loving patient parents we managed to be and we sure hope they forget about the time we were late to the school play or the day we threw a coffee mug in utter despair. Whether or not it works out that way is kind of a craps shoot.

Driving home from the concert I was thinking of one of my favorite Dolly songs…. Hard Candy Christmas. It kind of speaks to me this year. What the heck is a hard candy Christmas? Oh yeah, that’s when you’re so broke you’re making candy to share with the neighbors and that’s about the highlight of your holiday shopping, but I love how the lyrics say “me, I’ll be just fine and dandy!” because the truth is, no matter what ends up under the tree, we are so much more blessed than so many.

We have a home, and a family, and food on the table, and things to share with one another, and I have finally learned how to stop worrying about making Christmas magical and this year I’m just enjoying the Christmas magic. I still believe in Santa Claus and in all the ways he spreads Christmas joy.

Maybe it’s because my mom had her own hard candy Christmas once. She had gone through a divorce and we had moved to Houston. She was working 3 jobs- a single mom with 3 little girls, and I used to tell her not to worry, because we were 4 peas in a pod, we’d be OK as long as we stuck together.

I don’t think my optimism was buying much Christmas cheer that year. She never told us that Santa was this man who made it to every single house on Christmas Eve, she just told us he was the spirit of Christmas, and then she’d remind us about the true meaning of Christmas, and how our Aunt Bonnie used to make a birthday cake for baby Jesus to mark the special night each year. She was good at making sure we learned the important lessons.

Christmas Eve came and all my mom had to give were some Dollar store gifts and some crafts made out of seashells and she was feeling down so she picked up just one more shift at the Texas Tumbleweed where she waited tables.

The night was slow and the tips were nonexistent and she was determined to hang in there, but the boss sent her home early. She begged to stay, but he acted heartless and sent her on her way. Then people started inviting themselves over for one of my mom’s famous “after the shift” breakfasts and all she could think was “don’t you people have homes to go to?” It was Christmas Eve after all. For some reason, she didn’t turn them away; she fired up the stove and cracked open the eggs and started the bacon and a small crowd assembled. I can imagine her now, exhausted, but smiling anyway, that’s just how she did things.

I could hear the buzz of the household but I was still partly asleep when I heard the doorbell ring. My mother let out some kind of excited scream and she came rushing to my room first. Standing behind her was Santa Claus with a sack full of toys. She opened the door to the room my little sisters shared and my youngest sister bailed off the top bunk without looking twice. It must’ve been about 2 or 3am and there we gathered in our living room opening gift after gift, excitement bubbling over.

Only years later did my mom fill me in on her co-workers’ plan to give us Christmas, and how she grumbled through the day unaware that a miracle lay ahead of us, but I’ve never forgotten that Christmas. Every time my kids ask me if Santa is real, I tell them the absolute truth.

He’s the spirit of Christmas, and he lives, and once, when I was about 9 years old, I saw him, and that is why no matter how long I live, I still believe…. 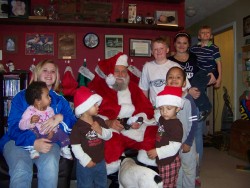