A Letter to My Pregnant Self

Posted by Jen Schwartz of Suburban Misfit Mom on January 24, 2017 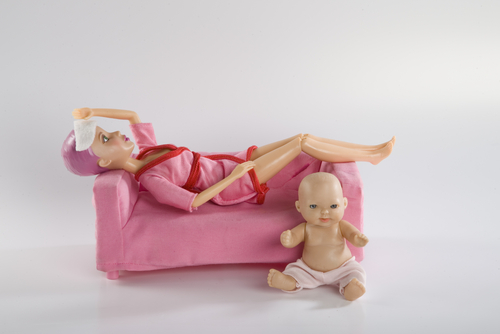 There is so much I wish I could tell you before you go into labor on that first night of Passover, March 25, 2016. Yes, you will go into labor during the first night of Seder while sitting at a table with 30 of your closest Jewish family members. Papa will be asking, “Why is this night different from all other nights,” and it most definitely is as you simultaneously death grip squeeze your sister’s hand under the table, time your contractions on your iPhone, text a close mom friend who informs you to “call the fucking doctor,” and realize that not only do your contractions not conform to the 5 minutes apart pattern you learned about in birth class, but nothing about labor and delivery is anything like you’ve seen on television or in the movies.

I regret to inform you that you won’t sneeze and gracefully pop a tiny human out of your vagina like Brooklyn Decker in What to Expect When You’re Expecting. You also won’t look pretty, perfect, and polished like Brooklyn Decker during and after the delivery of your baby. Swollen, stoned, and sleep-deprived is more like it.

Let’s start there. Labor is unpredictable and doesn’t always go according to plan. In fact, the word plan really has no business being in the same sentence as the words birth and baby. Your baby is going to do what he wants. He gives zero fucks about your plans, not while he is in your belly and not when he comes out. He doesn’t care that you want his bris to be after Passover so guests can enjoy their lox and cream cheese on bagels rather than matzo. It won’t matter to him that the best mohel in town might be on vacation (although he should because…it’s his penis getting snipped). And he really doesn’t give a shit that you want to do everything in your power to avoid a C-section and have him the old-fashioned way.

You think you will need to do whatever you can during labor to avoid a C-section. This won’t be a concern beforehand because your baby will never be breeched. You make this decision based on advice and information from a close mom friend. Don’t listen. You will labor for 24 hours, push for two of them, and end up in the operating room where your baby will be evicted from your belly anyway.

The next morning, when another slightly older and wiser mom friend comes to visit you and baby, she will inform you. “I knew you were having a C-section two hours in. Look on the bright side–all your lady parts are still intact–nothing wrong with a C-section.” She is right and you will come to love your C-section. It will never make you any less of a mother.

Your future therapist will tell you that a long, difficult labor is a risk factor for postpartum depression. Remember early on in your pregnancy, when one of your best friends asked if you worried about any “postpartum depression stuff” and you replied without hesitation, “Of course not. That would never happen to me. I’m so excited to have this baby.” Well it does happen to you, almost the minute you get home from the hospital, and you are anything but excited about having a baby.

You will spend the first 6 months of your baby’s life fighting what seems like an insurmountable battle. You will think you made a terrible mistake becoming a mother, experience paralyzing anxiety, attend weekly therapy appointments, take anti-depressants, cry, and sleep…a lot. But you will also find a strength in yourself that you didn’t know existed. You will fight and at 6 months, the Jen everyone knows and loves will start to return. By a year, you will love your son and have kicked postpartum depression’s ass. You will continue to go to therapy and take medicine, but that’s okay because both make you a better mom. You feel no shame about this. You learn to accept yourself as the mom you are, not the one you thought you would be.

You will spend pregnancy envisioning this mom that you think you will be–a fairy tale where you transform into a supermom, domestic goddess, breastfeeding champion, professional baby food maker, and lover of all Pinterest projects. I wish you I could tell you that your fairy tale comes true. It doesn’t.

All throughout your pregnancy, you tell people you are going to try breastfeeding your son. You will pretend to have no expectations, but really you picture yourself becoming a breastfeeding master—one of those moms who loves the bonding time feedings bring, whose baby latches with ease, and whose weight melts off because, well, “I’m breastfeeding.” What you don’t know is that these moms are basically mythical creatures. Just because you know one or two moms like this out of millions, doesn’t mean that those moms don’t have their own struggles too.

Initially you think you will be one of these unicorn moms because your baby latches and eats like a pro right after delivery. That’s the only time he does. He will struggle to latch and when he does he won’t stay that way, resulting in cries and screams of frustration from both of you. Your naked boobs won’t be off limits to anyone—lactations consultants and family members included.

You will stop breastfeeding after five days of motherhood as a result of the intervention of your own mom, mother-in-law, and a coalition of their Northern mom friends who bluntly tell you to, “Fuck breastfeeding. None of us breastfed our babies and they were all healthy children and are now thriving adults who also decided not to breastfeed their babies. You need to take care of yourself to be able to take care of your baby.” For a few days you will feel like you failed at something that was supposed to come so naturally to a woman, but eventually you will realize these moms are right. And you will come to understand and preach that there is no point in a mom making herself miserable to do something that makes her feel miserable. Formula is more than acceptable. Your son will still be intelligent, have no allergies, and less than one ear infection by the time he is three.

Nothing about breastfeeding and certainly nothing about motherhood comes easy to anyone. Listen to your mom when she tells you that those that say otherwise are “full of shit.” As you learned above, postpartum depression will lead you to realize that motherhood nothing like what you thought it would be.

As I finish up this letter, I’m wondering if I really do want you to know these things after all. Because not knowing them has made you who you are today—the authentic, courageous, strong, independent, warrior mom of the most incredible almost four-year old boy who you love more than you thought you could ever love anything in this world.

You don’t get your fairy tale of motherhood, but what you become is so much better. You are a fierce, confident, loving, compassionate mom. A fighter. A woman who feels empowered, knows who she is, discovers her voice and uses it to help others. Someone who isn’t ashamed of her mental health. Someone who doesn’t make apologies for the choices that are right for her. And an advocate for other moms to be the same. I don’t think I would have it any other way.

With authenticity, gratitude, and love,