Advent thinking: how college graduation and a fight on campus helped me (a creepy old gal in my 30s) review my year

Posted by Taylor Williams-Durant of Suburban Misfit Mom on December 22, 2016 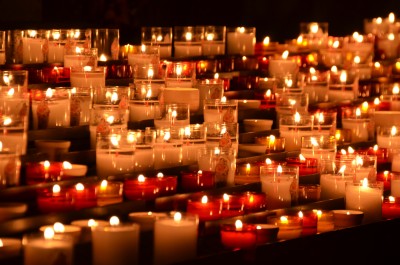 I live on the edge of a college campus, the one that I attended for undergrad and graduate school. I grew up on another edge of that same campus as a kid, so I’m well-acquainted with the space. I walk the campus several times a week, my paths imprinted on its memory and mine. I know what it feels like in different seasons (meaning, both seasons of weather and sports) and I know the sound of the bell tower and what the light off of the lake looks like as if it’s a part of my bones.

One of my favorite times to walk, as an adult (clearly, I was not an adult as a student – I see that now!) is around the winter holidays. I like to walk right around final exam time, when the semester is coming to a close. I like thinking that the college kids (yes, that’s what I was getting at – we’re kids in college!) are a mix of stressed and excited, cramming for exams but celebrating too, and preparing to take a break. Rest. Recoup. Maybe change their minds totally about what they want to do with their lives. Or at least what they want to do right now.

And then I like to notice the kids that don’t have that aura of anticipation – the positive kind, anyway. They look weary and worried, maybe even scared. Their posture or their crinkly brow or their nail-biting gives me pause. I’m the creepy old gal on campus who, at the very least, notices what looks to be their pain, but also usually tries to make eye contact if we’re close enough in proximity. Maybe because I’m a mother, and I can so easily slip into imagining my kids in these moments. I want to connect with these young strangers who look so down. I’ll try to meet eyes and give them a gentle smile or say good morning, not because I’m a saint, but because we’ve all been there in our own way, right?

What am I doing? Am I doing it right?

After this quick flurry of a season when all the students are buzzing around in the hive of campus life, there’s a sudden change. It’s like the final exams and the final parties came to brawl and the scuffle is over, and it becomes a ghost town. I like this time where I walk through the student union yard, and watch my back because all I can hear is the occasional fallen leaf trailing me, scratching against the concrete. I love this time too because, on my spiritual calendar, it’s Advent.

Advent marks the time of year on the Christian calendar (or anybody’s calendar who wants to participate, for that matter…I think I’m a Christian Buddhist at this point, but that’s another discussion) that is considered the “first season” because it leads up until the birth of Jesus. A lot of people like Jesus or at least his style, so a lot of people like Advent. Anyway, more broadly, it’s a time of renewal. Other words that jive with Advent are words like arrival, appearance, birth, rise, emergence, new life, development.

The Church does Advent, sure. But doesn’t life do Advent? Doesn’t life provide us with those cycles, the times of year (or even a couple years apart) where we find ourselves in the same place, arriving or at least trying to arrive?

On a walk this past week, I used the time to review my year in an Advent-y kind of way. I was trying to get into the cyclical mindset, looking for my same patterns and ways that I’d broken out of other ones. I also walked because it was graduation day, and I wanted my fix of caps and gowns and moving trucks and transition. I had to go be my campus junkie for the last time this semester. The moment I stepped onto campus, I could hear a man’s voice rising on the other side of the red brick building I approached. He was cursing, and I quickly intuitively knew his words were directed at a woman. His tone grew more stern and mean and loud as I got closer. He told her she was stupid. They came into view. They looked to be students, maybe a couple. He told her again she was stupid, and worthless. He cursed at her as she tried to reply. I felt my chest and my fists clench. I was sweating now. This sort of thing boils my blood.

Shut the f— up! he said to her, three or four times, pointing his finger at her in a scolding, awful way. Her head hung lower and lower. She was crumbling. I was getting very close to them as he carried on, really laying into her, when she managed to say in a louder voice,

You cannot speak to me that way.

And she turned and walked away. I fist-pumped in my heart, and wanted to plant that same fist firmly in the guy’s face as we passed. But who am I kidding. That didn’t happen. I watched him continue to berate her, not even noticing she’d left his side. When he did notice, a quick moment of insecurity swept over his face, like the security net of his anger had been swept away. This flash of doubt in him made me feel certain this was the first time she’d escaped. His gait changed. I came up on him and grabbed him by his hooded sweatshirt collar and said, “that’s right jackass, she WON.” No, I didn’t. That’s what my fantasy mind did. Instead, I let the guy pass me and followed her. I decided he wasn’t worth my time, other than to think he must be in a ton of pain. That kind of angry speech doesn’t come from nowhere. It comes from a bad cycle, a bad season, that has not been broken.

I didn’t know what I was going to say to this young woman, but I had to say something. I was her only witness. I caught up with her after observing her slumped body, her slow walk, her hung head. She wasn’t in a hurry. This was not anxiety-filled, it was overflowing sadness.

She stopped and turned and looked me in the eye.

Yes. Hi. I’m so sorry that happened to you back there.

She nodded and immediately started to weep.

He’s my boyfriend. She looked me so intensely in my eyes. Her were dark brown, rich and deep and full of grief. She was a young woman, but in this moment, looked like a child.

You don’t deserve that. You were so brave and so strong to say what you said.

Thank you…I’ve never done that before. I’ve been too scared.

I understand. That must have been so hard. You were so brave. How he was treating you is abuse, you know that?

Then my parental, creepy old campus lady, Advent-obsessed self came out.

She started to cry harder, and and then wrapped her arms around me.

I’ve made a lot of eye contact with strangers, students on this campus, but this hug was something else. We stood there for a while until she pulled away gently.

You going somewhere safe? I asked. Yeah, I’m going to go hide in the library.

We both breathed out heavy-hearted, and clasped hands for a quick moment.

And we walked in our separate directions. Again, I’m not a saint. She may have been, though.

I interrupted my year-in-review with that bodily buzz that happens when adrenaline and emotion release. I thought about what kind of woman she is, what kind of man her boyfriend is. Did she just skip a final exam because of the abuse she finally refused from him? Did he go to the exam and ace it, or did his mind fixate on the hurt he caused, or the fact that she stood up to the hurt for the first time ever?

And that’s Advent, too. That woman made a first move – an arrival, a re-birth move, by putting her foot down and saying, you cannot speak to me that way.

So I guess that’s Advent thinking. It’s thinking with new life in mind, and sometimes, asking for a witness. Support. And that we’re given new life all the time, even when something is being taken away. Advent thinking puts me in a totally different place when I’m walking around as an observer on campus: the worry, the toil, the effort, the insecurity, the confidence – that we all scuffle with. Campus is a little symbol, a microcosm, or our cycles – the beginning for some, the end for others, and those who fall in between, just squeaking by. Now, in my 30s, I am in an in between space where it’s been many seasons since I was a student (when I go to Starbucks on campus, the baristas call me ma’am – dammit.) Now I’m a parent, and I can empathize with the mothers and fathers that walk around with their new graduate, too. They can look that same mix and mountain of uncertainty and elatedness, pride and fear.

And it reminds me that my parents are somewhere close by, on another edge of campus where I grew up and where they still live, thinking about me, wondering if all is well, equal parts hopeful and hoping.