An Open Letter to White Women Who Voted For Trump

Posted by Renea Dijab of Suburban Misfit Mom on November 15, 2016 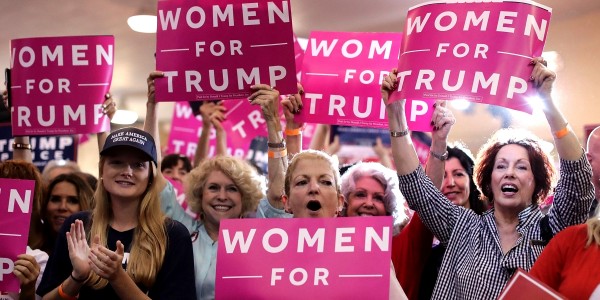 52% of white women voted for Donald Trump. White Women just put the most anti-woman candidate this nation has ever seen in the White House.

I was wrong. Terribly, devastatingly wrong. I was one of those that said Trump could never win. Never.

In trying to wrap my head around the fact that this country just elected a reality show con-artist to the highest office in the land, that my fellow citizens just gave the nuclear codes that will destroy us to a childish, narcissistic tyrant, I have been trying to figure out specifically what false belief in my world view made me think that it couldn’t happen.

I have spent the past few days reading and listening to the post-mortem of the election that will change America forever and I think I have finally figured it out.

I did not think that Trump could win because here was a man who was openly sexist and misogynistic, who called women pigs and rated them on a sliding scale based on their boobs and age, who said really creepy things about his infant daughter’s potential breast size, and dating his hot daughter Ivanka, a man who openly bragged about sexually assaulting women (and make no mistake grabbing women and touching them against their will IS sexual assault), a man with a dozen sexual assault claims and a child rape charge against him (since dropped I believe but the supposed incident happened at the home of a currently convicted pedophile which adds some credence to the charge for me), and after all of that, I was CERTAIN that white women would not vote for him and without us, he could not win.

Of all the terrible things that Trump said, of all the people he insulted and threatened, I thought that we white women knew better. I worry about what you are teaching your daughters about their self-worth and how men should treat them. I worry about your sons. Surely if the President of the United States of America, a crude, vulgar, disgusting man, can grab a woman by her genitals, why shouldn’t your sons be able to do so?

White women just threw all women under the bus and I just didn’t believe you would do that. Most likely, with the House, Senate and Supreme Court, they will finally be able to outlaw abortion.

How many of you are okay with your 12-year-old daughter being forced to give birth from a horrific rape meanwhile, the rapist winds up with visitation rights?

How many of you are okay with your child giving birth to a damaged baby born from incest?

How many of you are okay with dying because of a pregnancy you are forced to endure or forced to carry a dead baby in your womb until delivery?

They plan to take away millions of people’s health insurance, most certainly some of them women. The combined cost of this looming healthcare crisis for women is staggering to contemplate.

Insurance companies will continue to be allowed to pay for Viagra, but not an IUD. Women will be dragged back into the proverbial cave by their hair. Apparently, “Making America Great Again” also means reducing women to their 1950’s status.

I am past reproductive age and I have health insurance. I can also afford to take my child to another country if she needs a medical procedure that she can’t get here. As a middle-class white woman, I will be okay.

The die is cast. It is too late to turn back now. I think there will be some hard days ahead of looking in the mirror for you, that is if you can self-reflect with an open mind and heart.

I have been accused of hate many times in the past few days. I don’t hate anyone. But to White Women who voted for Trump, you are not my people. You are not my tribe. When I circle the wagons and protect those I care about, you will not be included. I don’t hate you, I fear you and the world you want to live in.

So, I know that this morning I have to work harder to advance gender equality. To teach young women and girls that they matter. That despite the devastating effects of this election on their psyche, we women will go forward.

I will wear a safety pin on my chest to let my Muslim Friends and my Black Friends and my LGTBQ Friends know that I am on their side. I am a safe place.

I will also be explaining to my daughter that our current President is an example of the way a man should not behave.