Posted by Michael Badger of Suburban Misfit Mom on July 7, 2016 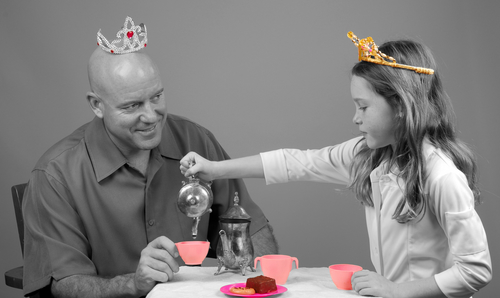 “Your [sic] gay dude,” was actually one of the nicer comments, albeit poorly written. But then again, internet-trolls aren’t really known for style and finesse. I was called a “Mangina” by another gentleman who when I clicked on his Facebook saw that he was a police officer in Maryland. I had plenty of men call me pussy, fag and many other epithets. I was angry. My manhood was under attack. My face burned as my body pumped with adrenaline. I began trying to justify myself. You don’t know me, I thought. You don’t know what makes me a man. You weren’t there when my father passed away and I had to care for my family and our ranch. Could you have done that? As these thoughts swirled in my head the question I should have been asking was “Are you man enough to make a male-centric world better for our daughters? Better for all women…”

It had started innocently enough. I had read an article on Facebook about young girls taking over skate parks; the story detailed how young women are becoming extremely competitive with the young men that once dominated the sport. I was excited when I read the article and I left a comment saying that I was glad women were taking over the sport and that hopefully it will continue in every sport. I went one step further and wrote that “Girls Fucking RULE!” It was a fairly innocuous comment and I didn’t give it another thought.

A few hours later while I was out running errands I received a Facebook notification. It was from someone I didn’t know so I ignored it. A few minutes later I got another, and then another. Curious as to what all the notifications were about I opened Facebook and read the comments.

Initially I was angered and I wanted to throw punches. I wanted to attack these men right back, starting with their poor grasp of basic grammar. Those anonymous opinions should have meant nothing to me, but I’ll admit they hurt.

My dad used to warn us about what he called false pride; he would say that nothing in a man’s life speaks with less truth and more anger than his ego. Every man I meet I measure against my father. My father was the kind of man most men wanted to be. He was handsome, strong, funny, opinionated and gregarious, but he was also gentle. He also did something that a lot of men felt like they couldn’t or shouldn’t do. He revered women. My father wouldn’t fear these men and I’m not going to either. What I was seeing on my screen wasn’t real, much like their bravado—they were just words. I reread the comments a few hours later and I began to feel sorry for these men and their small ideas of manhood. You see, no matter how tough a guy is, if you attack his ego he will lash out. After all, it only took a few guys calling me a pussy for me to want to throw punches and list all my tough-guy accomplishments. I am fragile too, and my ego bruises easily.

It occurred to me that I could easily punish those men. I could have sent a screen shot of their misogynistic remarks to their loved ones and employers. I didn’t though because it felt wrong to show their loved ones who they are online. One man who had commented something particularly offensive had a picture of his recently deceased grandmother on his Facebook where he had written a tearful tribute to her. How could that same man write such contemptible remarks and then write sweetly about his grandmother, a woman? What is wrong with these men? How did they become so misogynistic? Why do men show such little respect to women?

I’m still confused about what it was that I said that made these men so angry? I merely applauded young women for excelling in a sport that was male dominated for such a long time. Does that make me a traitor to my gender? Does it make me weak? Clearly I hit a nerve. I think a big part of misogyny comes from our ego’s being much more fragile than our female counterparts. Socrates said it best when he wrote, “When women are made equal to men, they become their superiors.” I believe that deep down men are afraid of that. As women become more prevalent in leadership positions our egos become harder and harder to protect. Women are leading the way in education, government, medicine and the military industrial complex. They are going to write the policies that govern our country. At some point men will have to admit that we are not leading women. They are right next to us. And some—some are way ahead of us.

This probably isn’t the last time I will be attacked for my views because I’m not about to stop voicing my opinion. Women have been oppressed by our egos for far too long and I have way too much at stake with my daughters growing up in this world to give in now. So here I am, and call me what you like. One last thing: for my all my internet-troll friends, thank you for the compliment but next time try to remember that it’s “You’re gay, dude.”