Posted by Jill Wexler of Suburban Misfit Mom on September 28, 2016 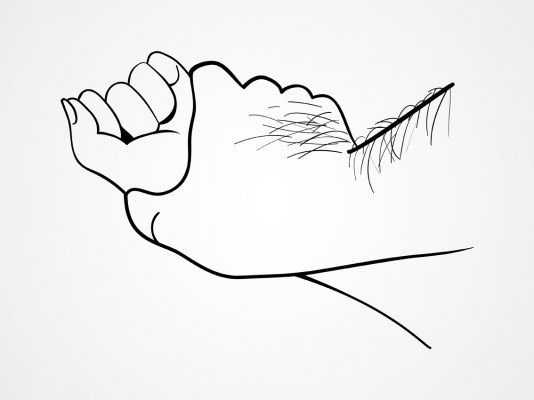 My older son is 13 and decided recently he needed to shave.  Whatever, dude, go for it.  I did have his dad supervise and give advice, and I did manage to sneak a couple phone photos to share with friends and family.

He’s in the 8th grade.  Last year, he went through several “girlfriends” at school, all within the middle school band community.  We had a lot of up and down drama because nobody does drama better than 7th grade girls on social media.  And over the summer, he and his guy bff met several girls out at a local amusement park.  As I drove them there the first time, I realized we had hit this point where I needed to start giving him information on how to treat girls right.

My daughter is 22 and it’s amused me to no end how differently I treat my son from her.  Sometimes I fool myself thinking it’s a “second child” thing but it’s mostly a gender thing.  And I never, ever thought I would treat my children differently according to their gender.  For crying out loud, my daughter had equal amounts of Barbies and Tonka trucks.

I realized this about two years ago, when my son asked to walk up to the convenience store with the neighbor kid.  I had said yes, gave them a “behave yourselves” talk and let them go.  And promptly realized he was 11 and no way on God’s green earth would I ever have allowed my daughter to do so at that age.  Or ride her bike to a friend who lived way back in the neighborhood.  Why not?  Because of the danger.  And my son?  Ain’t nobody knocking his 135lbs off a bike and dragging him behind a dumpster…because those things are so much less likely to happen to a boy (not saying it can’t or hasn’t happened, but there is definitely less fear on my part).

This past year, in particular, I’ve been revisiting her junior high years forward with a new viewpoint.  And it has taken root in my soul at how insane life is for a girl.

My number one rule for “going out” was that she had to have another girl with her.  Her social group was pretty even, girls and boys, and the boys were fairly good kids overall.  They were always hanging out at my house because I was the ONE mom who refused to allow her kid to walk all over town doing whatever she wanted (geez, Mom).   But I never relented on that “always have a girl with you” rule and those boys never could grasp it.  I can still see them, looking at me with such confusion, saying “but we wouldn’t do anything to hurt her, you don’t trust us?”

My answer was no.

I remember teaching her how to hold her keys in her hand when leaving the school or work or wherever.

I remember teaching her how to kick a guy in the nuts.

I remember teaching her never to go to the bathroom alone at the mall or anywhere else public.

I remember teaching her to never get gas after dark and good grief, don’t ever consider a car wash at night.

How to scan your environment as you walked home from school.

How to break a wrist hold.

How to dress without showing too much cleavage.

How to watch out for all the tricks boys have to “accidently” touch her boobs.

How to always park in a well-lit area of the parking lot.

So many unwritten rules that I taught her without even really thinking about it because these were all things I was taught and considered the norm.

Did you hear that?  Teaching our daughters how to not get raped is considered the norm.

When she moved out into her own apartment, I had more things to teach her as well.  And again, it was simply lessons handed down through the generations, like a cookbook.

A fucking cookbook called “How Not to Get Raped or Killed.”

A friend of mine, within this past year, read her husband and son an article similar to what I just listed…the cookbook, so to speak.  And her husband, a nice, decent man of 44 years, was so shocked and stunned by this, apparently just stuttering “are you serious?  You were taught things like this?  Are you seriously scared to walk to your car at night?”  He honestly had no idea.  Because we have never talked about it.

This past year has been inundated with rape stories galore and social media has not let it go.  And what’s funny is that I’d thumb through my social media and see the Brock Turner stories to the latest Canadian asshat judge stories and the people who were posting them were my daughter and her friends.

Not my demographic.  Hers.  The Millennials.  The young girls who have finally decided it should no longer be the norm that you will probably get raped.

One of the prevailing memes that shows up from these Millennial girls is like this: 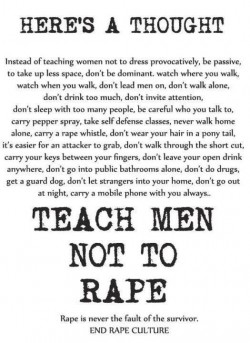 It’s their version of women’s suffrage and the suffragettes marching around, exactly 100 years ago.  These girls have decided rape culture needs to end and they are not backing down.  Don’t believe me?  Friend a 20-something young lady and scroll through her social media.

I have two sons, and one of them is at the right age, 8th grade.  We started having conversations this summer as he and his friend began meeting these girls at the amusement park or at the swimming pool.  Okay, it was a one-way conversation at first…about touching, hand holding and so forth.  It’s been a one-way conversation because 13 year olds don’t like to talk about these things with their mommies.  But it needs to turn into a two-way conversation.

Because it HAS TO.  I have to know that he’s getting it.  That he understands.  And it’s killing me inside that I don’t have to teach him about keys and bathrooms and parking spaces because he’s not a girl.  I taught my girl those things.  But I’m realizing I do have to teach my son these things too, but from my female angle.

And the other hard thing is that it’s typically assumed that the dad will handle the sex talk with his son, right?  Father-son moment, right?  Now…I’m not saying that dads are doing it wrong, but I’m also not saying that dads are doing it right.  Because A) they were never taught (most likely) about the horrors of rape, and B) they CAN’T teach what they don’t know.  I’ve never been raped but I know that fucking cookbook by heart because, as a female, I’ve lived this my entire life.  Men don’t grow up in fear of being attacked, so how can they fully teach their sons how to treat all women properly?

It’s fucking hard to wrap my brain around.  As a mom, I’m already in charge of so much nonsense in the upbringing of my kids that I seriously groan when realizing that I have to handle this too.  Not because I don’t trust my husband to do a good job, but he will be doing a good job with what he knows, and only with what he knows.  I have to step in and make sure my sons understand, truly understand what rape is.

So when these stories crop up, like Brock Turner and the Canadian judge, I’m pulling them up, making him read a bit and then we’re talking about it.  And you bet your ass I’m using his sister as an example.  I won’t lie (and say she’d been raped or anything) but I have zero qualms about stretching some truths here and there so that he has an emotional connection to these stories.

Because it’s all fine and dandy to have “respect seminars” in the school system but we all remember being in 8th grade and how we “listened” to those things.  They are intangible.  And also it’s uncool to act like you care or are paying attention.  If I keep saying “your sister,” he’s making the connection to a real person.

Moms and Dads, we have to do better with our boys so that we are doing better by our girls.  Right now.  And as uncomfortable as it is to have to explain what “rape by instrumentation” is (delicately), our boys need to know that forcing ANYTHING on a girl sexually is rape.  When I read the letter written to Brock Turner by the victim, my 13-year old’s response was:

“She had to go through all that and he didn’t have to do anything?”

It would be easy to let it go right there but no, I had to reinforce her side of the story, lest he think “dude, look what he got away with.”  Because isn’t that the cultural norm we are fighting?  Our boys seeing that they can get away with rape with minimal consequences.  It’s an uphill battle and the thing is, it’s damned uncomfortable.

And I know most of you who have sons, they are probably under the age of 10, and you are cringing while also thinking “I’m teaching my son to be polite and respectful.”  I’m sure you are.  And I’m sure Brock’s mom thought that too.  Brock’s parents aren’t monsters, and by all accounts that I’ve read, Brock could have starred on “Leave It To Beaver.”

But five bucks says his parents never sat him down and really and truly discussed rape with him.  And I mean, nitty-gritty-from-a-girl’s-perspective.  I don’t necessarily fault them, because the culture has never supported these discussions.

Until now.  Our Millennial girls (and hopefully their male counterparts) are pushing this over and over and we need to back them up.  We need to join the fight to change this culture by raising our boys with these conversations.

Our boys need to understand that rape is not acceptable and they need to understand the why – don’t just tell them “hey, don’t rape,” but instead tell them why they shouldn’t and don’t you dare just end with “because it’s not okay.”  When they are old enough, you can give them those nitty-gritty-from-a-girl’s-perspective talks and make them acknowledge it.

If we don’t start now, my daughter will be teaching her daughter all the “norm” rules that she learned.

This has to change.

Teach your boys not to rape.