Posted by Ailish Delaney of Suburban Misfit Mom on February 6, 2017 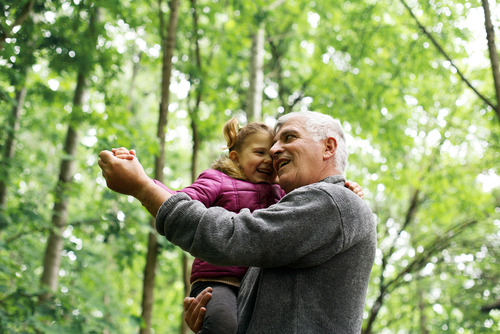 C for Cancer. C is for Cruel and Callous, for Crummy, Crappy and another word I won’t use.
That one word, those two syllables which change your entire life. In the one second it takes to hear that word, your entire world can be turned upside down and inside out, and nothing will ever be the same again.

I can distinctly remember the day I found out that my Dad had cancer. I was in my late teens, and working in a printing shop. My Dad had been to the hospital and I was waiting to hear how his appointment had gone. Impatience got the better of me and I called home. My Mum answered the phone and I knew – I knew by her breathing, before she even spoke.

My Dad was, and always will be, my hero. He knew everything! I could ask him anything about any subject and he always knew the answer, and on the rare occasion that he didn’t know it he would find it. Instead of just telling me where a certain place was when I asked, he would get a huge map out, spread it out on the floor, and show me, pointing out surrounding landmarks so I would remember. He always told me to read, anything and everything I could. Newspapers, cereal boxes, wrappers…wherever the printed word could be found, it should be read, he told me. I would spend happy Saturday afternoons at the library with him, sitting on the floor reading while he perused the shelves for a new thriller. I will always associate the smell of books, particularly old books, with my Dad – a mix of love, and comfort, and security. It’s a warm smell. Then we would go home and he would make sausage sandwiches which we would eat while watching the wrestling…Big Daddy, Giant Haystacks, I loved them all.

He had bowel cancer. It took the doctors two and a half years to diagnose him, despite him having all the classic symptoms. They operated, and removed most of his bowel and fitted him with a colostomy bag.

I got married on my 23rd birthday, and my beloved Dad walked me down the aisle. My wedding photos were the last photos I have of him where he looked healthy, but even now, when I look at them, I can see the pain in his eyes, the pain he hid in order to walk me down the aisle. Then he was diagnosed with liver cancer. The original tumour had been successfully removed, but it had metastasized. I begged the doctors to do a living transplant – livers regenerate, right? I would give him half of mine. They refused, tried to blind me with medical jargon but what it boiled down to was his age. He was almost 70, and that, they said, was too old. But he was a vibrant man, still working full-time. How could it not be worth it?

I sat with him through his chemotherapy sessions. Long, boring sessions, watching every drop of poison dripping into his veins and trying to keep his mind off it. I remember there being a long wait for one of his treatments, and the nurse apologised. My Dad, in his usual chivalrous manner, said it was ok, he had all the time in the world. Then he looked at me and said ‘well, you have anyway’ and winked. It was typical of him, treating everything with humour.

I had my first baby seven months before he died. I will be eternally grateful that he got to meet her. When we would visit she seemed to know that Grandad wasn’t up to her wriggling and she would sit still on his lap, reaching her tiny hands up to his face and touching his cheeks gently. I wish with all my heart that he could have met my son and youngest daughter, too. He would have been so proud of all three of them, and they would have loved him.

We would go over and see him every day, my baby daughter and I, and I would make him tea that he couldn’t drink, and lunch that he couldn’t keep down, and I would hold his hand and we’d reminisce. Sometimes I would read to him. I have no idea whether he ever really listened, but it was time we got to spend together.

My Dad died in my arms, on 11th June 1995. I was visiting and the doctor came and told us that if we had people who needed to say goodbye that we should get them over as soon as possible. I was lying on the bed with him, and he had been in and out of consciousness for the past few weeks. He woke up, and pointed at the wall, talking about his ship setting sail – he had been a chef in the Merchant Navy and in his mind he was back there. I put my arms around him and pulled him close to me, and as he drifted off to sleep I talked about the holidays we had had together, and the holidays we would go on in the future. I thought he was asleep, but when I looked down at him his eyes were open, and he was looking at me and smiling.

He took his last breath, and was gone.

My heart broke that day. He was a shadow of the man I had grown up with, and watching him waste away was so painful, but feeling the life leave him, knowing I would never see him again, destroyed me utterly.

That was almost 22 years ago. I see him in my son, who is now a man himself, and I also see him in my daughters. Their love of books, their thirst for knowledge, is reminiscent of their Grandad.
My son said to me recently that he wanted to be remembered the way my Dad is remembered – the font of all knowledge, the fixer, the one people go to when they want to know the answer. And he will be. He shares the same characteristics; the gentlemanly behaviour, the courtesy, the respect he has for women are all reminiscent of his Grandfather.

Today, although time has softened the sharp edges of pain, I still miss him so much. The tears still find their way out, and that familiar ache in my chest, whenever I think of him, has never faded. And I’m pleased because I never want to stop missing my Dad.

So, today on World Cancer Day, I am thinking of him, and I am also thinking of all those who have lost loved ones to this cruel disease.

And I will be forever grateful for having had my Dad in my life, I just wish it had been for longer.