Posted by Carol Nissenbaum of Suburban Misfit Mom on January 29, 2016 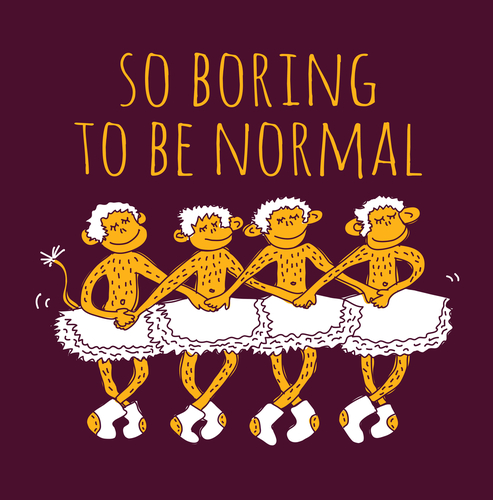 I am a Suburban Misfit Mom. I have never fit the mold, never will. I don’t have a circle of friends, I have a parallelogram of fellow misfits who think outside the box, just like me.

Years ago there was a game called Barrel Full of Monkeys. A simple game, it consisted of a plastic barrel and a bunch of, you guessed it, plastic monkeys. The object of the game? Create a chain of as many monkeys as you can. Break the chain – you lose(r)! Well, I refer to myself as a “defective monkey.” Although it’s a child’s game, the theme has continued into my adult life. Try as I might, I never link up with everyone else. I’m the weakest link.

And while we’re on the subject of animals, let’s discuss sheep. I have never been a sheep, never will. I don’t need to drive the same brand of car as everyone else; I don’t need a second mortgage to pay for a collection of designer handbags. My husband is a blue collar worker, and proud of it. All these things tend to offend sheep.

I have found, in my 20+ years of motherhood in suburbia, that many of these creatures are superficial, shallow, and petty. I have known potholes deeper than some of them. Their favorite pastimes include gossiping, particularly about those who dare to think for themselves or don’t fawn over them. I’ve been judged based on my house (too small), my car (not a luxury brand), my weight (too fat), my friends (not sheep; see above). I just don’t measure up in their eyes but guess what? That’s OK. I don’t have to impress anyone. I’ve always told my kids, just because someone has more than you doesn’t make them better than you. Words to live by.

It can get lonely sometimes being the odd one out. But I have sought out high-quality friends I can count on, not high-quantity friends. I’ll never be a monkey blindly following all the others. I think that’s bananas!