Don’t Be Afraid To Let Your Teenage Daughter Date: Be Afraid if You’re Not Teaching Them How

Posted by Tricia Jelonek of Suburban Misfit Mom on December 10, 2015 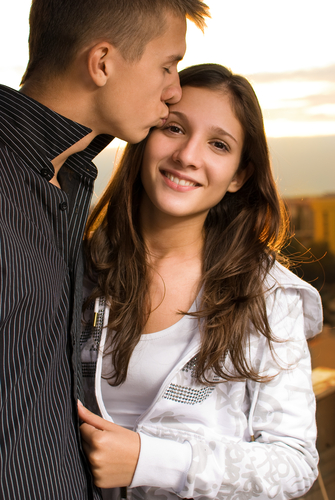 You could say that my philosophy on dating is like choosing your favorite ice cream flavor: You need to try all the flavors before you decide on which one you like best.  I didn’t try all the favors.  I didn’t even know that I could try all the flavors.  In fact, when I had my first boyfriend in high school, we dated for over a year.  Now, for those of you who don’t speak teenager yet, that’s like forever in teenage land.  And if I could go back in time, I would do things a hell of lot differently.  Maybe if I had a clue as to why we date, or how to date, way back when, I would have picked better when it truly counted.  Instead I ended up with a broken picker outer, even worse, I ended up with an ass that I now call my ex-husband.  So when it came time for my girls to start dating, I didn’t want to sit back and ignore the fact that they were growing up.  I was and forever will be, totally content to ignoring the fact that I am getting any older.  And I knew it was up to me to make sure they got it right.

I’m not going to lie, at first, the thought of having my girls date was enough to send me right into the fetal position.  How could I stand on the sidelines and watch them go through having their innocent hearts broken?  It’s like sending in the lambs to be slaughtered.  And would I be able to restrain myself from hunting down the boys and inflicting pain?  Lots of pain.  But as any mother knows, we can’t keep our children locked up in a tower, protected from all the evils of the world. (Trust me, I know it sounds tempting… until they start annoying the crap out of you).  As any kick ass mother knows, what we can do is to guide and mentor them as they are learning how to date by passing along the following:

I would like to tell you that you will never have to watch your child endure their first crush, or console them through their first heart break.  What I can tell you is, they will be okay.  All you need to do is make sure they have a safe place to land when it happens.  And in no time at all… I kid you not, like the very next day… they will have forgotten all about what’s his name, and on to the next drama filled teenage crisis.

Don’t be afraid to let your teenage daughter date; Be afraid if you’re are not teaching them how – Skip the cheese… Just pass the wine.net says:
December 31, 2015 at 4:50 pm