(Don’t) holler at your girl: how my own heckling moments lead me to talk to my daughter about playground politics

Posted by Taylor Williams-Durant of Suburban Misfit Mom on February 14, 2017 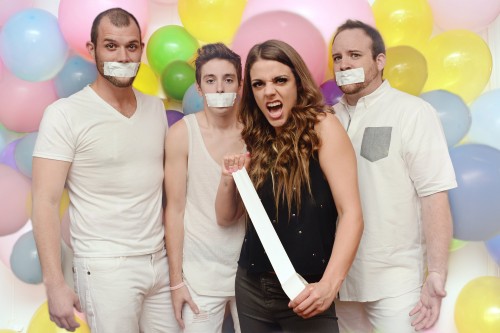 My daughter recently came home from school and told me that a little boy on the playground was pushing her around. Not so much physically, she reported, but more verbally. Telling her she couldn’t be friends with so-and-so, that she wasn’t allowed to play the game, and that she was stupid. That sort of thing. I asked her some clarifying questions, and while she was fine, she was visibly sad, and maybe embarrassed. She reassured me (without my prompting) that “she was OK because she was strong,” but she was still upset. We talked about it as we put a puzzle together, and while she remained quite calm, I watched myself with horror as I got too upset about this and envisioned pushing over the little boy myself, into the leaves with my big ass manly hands. The fantasy continued to play out as my daughter kept talking about it and I zoned out. His mom would then catch wind of what was going on out of the corner of her not-watchful-enough eye, and she’d run over. Then I’d have to ask one of the teachers to hold my earrings and I’d say something like, “Oh – you wanna GO then, Girlfriend?” and a small but nasty and proper fight would break out. Then we’d settle it, and our kids would hug and the following Saturday, that mom would pick me up in her mini van, and we would go get mimosas after a spin class.

Oh, BTW: my daughter is three and a half. We’re talking preschool playground politics here, but I think they’re important.

My daughter and I finished our conversation (don’t fret – I refocused and became a sane mother again quickly) and we talked about how to use confident words to tell people “no” and how one can use emotional words to describe how they are feeling about the situation. She was delighted and for the next 24 hours, told everyone who would listen that “she was frustrated with that boy.” Nailed it.

But I continued to think about why my reaction felt so strong, outside of feeling generally defensive for my Pumpkin. It was something else. I needed to check in with my own feeling words for a sec. Pretty quickly, I drew it back to being heckled on the street, over years of time, as a girl and now as a woman. I do not say this with a veiled arrogance or some secret that I’m akin to a Kardashian. I’m a normal gal, and that’s precisely the point. Normal gals face this crap every day. It’s a topic of conversation all the time – at parties and on Facebook walls and at mimosa brunches with that woman you just scuffled with on the playground.

I’ve always gotten heckled by boys and men, again – much like most women I know. I am not special. And therein lies the issue: we do not feel special when we are cat called. I’ve heard the argument before that women who get hollered at ought to be grateful, because it’s a compliment or because it’s some sort of rarity. Barf and barf. I can take a compliment, I am not one of those that cannot say “thank you.” But being cat called “a fine piece of meat” on the street is not the same as someone saying you have nice eyes. C’mon, we all know that. Some of my favorite moments of this sort of unwanted attention were when I was pregnant (yes, it happens to women all the time.) I was once called a “Voluptuous Fairy,” and on another occasion, as I waddled down the street, a man called out from the Krispy Kreme parking lot: “DAMN, GIRL – you about to make it RAIN!!!” Sir, that’s quite enough from you. (But are the glazed donuts available right now?)

Another misperception is that all hollers come from construction workers or men of color or some other negative stereotype. This is emphatically not true. They can come from old men at the gym who you otherwise might think would be a sweet old grandpa. They can come from men who are dressed nicely and look like they might be headed to golf in their cardigan. They can be from classy white dudes in nice cars, and the lad who comes to politely check your water meter. So we can’t stereotype the perpetrator, just as we can’t stereotype the victim.

Thinking on this made me harken back to one of my landmark heckling moments, if that’s a thing. One particularly beautiful, chilly spring day when I was living in Manhattan, I went for a walk. I was leaving an audition, so I was a bit more gussied up than usual, and pranced along the avenues in my high heels and long coat. It was a good, high energy sort of day. Did I get the gig I’d auditioned for? I honestly don’t remember, because the events on the way home proved to be far more exciting than the try-out itself. I turned onto a quiet street to cross over to the next avenue. I was naively delighting in the silence of a New York spring day, a rarity. The silence part, I mean. And I was strutting along, with a pep in my step.

As I approached a fancy brownstone building, I realized that a full-blown construction crew was out front, renovating its façade. I thought it odd, that a crew big enough to replace all the Christmas lights in Rockefeller Center was instead working on this small piece of property. It was like catering crew with a big wedding on their schedule focusing on a one-year-old’s birthday cupcake instead. I wondered what the building’s tenants were like: was it a condo building with families and old fancy single women and gay couples and dogs? Or was it a rent-controlled building, where normal day-to-day folks who work in the bodegas and drycleaners and restaurants lay their heads at night? Or was it an elderly couple’s place, but the husband had passed and his high society wife, covered in mink and diamonds and hairspray, sat inside sighing at the noise outside the window and wondering if they’d be cleared out by 5 so she could escape for a Shiatsu massage and champagne.

My thinking was interrupted by the sound of a jack hammer immediately to my right, and I realized I’d been thinking so hard that I was no on the sidewalk directly in front of the property I was thinking too hard about. And then I could feel it coming. There were two men by the front door, working on the sidewalk leading up to the entrance. They were bantering back and forth loudly, one demanding things in English, and the other one angrily responding in Spanish. But, as many hecklers (of all types) do, they stopped what they were doing to cat call. The Spanish-speaking man stay silent and just gave me an alert smile, but the English-speaker managed to get out the old classic, “Hey Mama, show me that smile…or you’re not going to smile for me?…what, are you shy?”

Now, I’d had other encounters of this type, including the time before this instance where my husband was with me and the men manning a kabob stand were talking to me like that (in my husband’s presence!) and it made us leave our meats-on-a-stick right then and there and have a productive conversation about what was so angering about this sort of street abuse and how I could handle it in the future. Usually, I might give a dirty look or say a simple “GROSS” and walk away, or just ignore it. But I was getting fed up. So when this young chap threw me the “you must be shy if I can’t get a smile” line, I lost my dang mind.

A voice emerged from the depths of my belly (or hell, I’m not sure) as I dropped my bag and pointed both pointer fingers in his direction and said, “DO YOU HAVE A MOTHER AND DAUGHTERS BECAUSE IF YOU DO, THEY WOULD BE ASHAMED OF YOUR EXISTENCE AND ALSO THEY’RE GOING TO NEED TO COME HELP YOU FIND MY FINGERS UP YOUR STUPID RUDE BUTT!!!!!”

In the moment of deafening silence that followed, I did not focus on what his response might be or if any of the neighbors were peering out the windows and calling the police. Instead, I started to scrutinize my threat. It had been far too long, damn-near an outline by the time I’d spit it out. I abused the privilege of a run-on sentence. Also, why in God’s name had I used “butt” when I had my chance to be crass and use the more threatening word, “ass?!” I had missed my moment! Also, my throat hurt from that voice. I needed a lozenge.

The English-speaker’s swarthy, sweaty smile turned into a face of disbelief. He straightened his posture and adjusted his tool belt, looking around, possibly for witnesses. The Spanish-speaking man frowned and said something to the English-speaker, which I did not understand, but took it to mean either, “Dude, say you’re sorry,” or potentially, “Dude, let’s get out of here.” Even the birds in the surrounding flowering trees were now silent, and I could picture them looking at each other and whispering, “Well, that got awkward.”

The English-speaking man took off his construction hat and put it to his chest and sort of bowed, like a cowboy to a lady passing by on the dusty road. “I’m sorry ma’am.” I had no spirit (or voice, mind you) to respond to his apology. I could hardly feel my own feet in my heels anymore, so I took them off as the men and the concerned birds looked on, and I went on my way.

As the moment settled in, I did feel a sense of pride. I had scared him. I had shown him, in my own desperately odd way, that that was not OK with me. And that’s really what mattered, not the exact words I used or how I pointed my fingers or brought up his female family members. It felt good to have said, “NO WAY,” not “No, thank you.”

Do I digress from the whole beginning of this thing, about how my daughter defends herself on the playground? I don’t think so. I can remember instances on the playground or the bus or the field out in P.E. when I should have defended myself differently, but at that age, I didn’t know. I doubt I told anyone that I’d felt heckled or hurt or embarrassed. So when my daughter tells me she felt that in pre-school playground time, we talk about it. Anything can be overdone; I’m not sounding the alarm or telling her to fight or anything. But I am telling her to say, “Hey – that’s not OK.” And if need be, to throw enough shade that the birds shake in their boots and whisper to each other from the trees.