Endings, Beginnings, and the Bludgeoning of Don Henley

Posted by Michael Badger of Suburban Misfit Mom on September 21, 2016 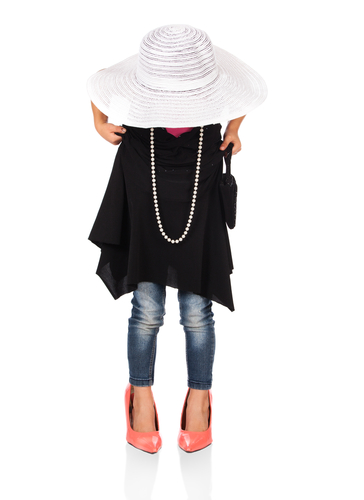 My hands clasped tightly over my ears when she repeated the word back to me.

“Daddy, uncover your ears,” she said pulling at my hands.

It’s not though. It’s not just a word. It’s the beginning of the end. My nine-year-old daughter used the word breasts. Well, more accurately she used the word boobs. I clasped my hands over my ears so I wouldn’t have to hear her childhood coming to an end.

As we sat on the couch together watching TV I noticed my daughter pawing at her chest. “What’s wrong?” I asked. “Nothing,” she said, “I just dribbled some water on my boobs.” “What!” I said sitting upright. “Okay,” I said flustered and searching for words. “First off all they’re not called boobs, they’re called breasts and second you do not have breasts.” “Why are you yelling?” She asked. “You’re nine-years-old,” I said more calmly. “You’re just a little girl. Little girls do not have boobs. I mean breasts. They don’t have breasts.” She paused and thought for a moment before replying, “Yeah but in like three-years I’ll be twelve. That’s the age when girls start getting boobs.” “You mean breasts,” I said. “Breasts,” she repeated back to me. Like a powerful uncontrollable reflex, my hands clasped over my ears when she repeated the word.

Sadly I knew she was right, and I’m assuming that’s what caused the sharp pain in my chest and the lyrics to Don Henley’s End of the Innocence to invade my head. I’m not completely clueless, I know I can’t cover my ears forever. That’s a terrible way to deal with things. But I’m not exactly known as someone who, “Deals with things.”

Nine is such a strange age. Without question 9-years-old is still little–still just a child. Just three short years-ago she was in the first grade learning how to read and write. So whatever doctors may say and whatever marketing research has tried to push on us, our pre-tweeners are still little. Though I may be right, (I’m definitely right) adolescence doesn’t seem to care about my thoughts on what constitutes childhood because those tween vultures are circling; getting a little closer each day. The proof is in her style and interests; they are quickly evolving. We were back to school shopping last week and I held up a My Little Pony shirt for her approval. She looked and the shirt and wrinkled her nose, “Too babyish,” she said and dismissed the shirt with a wave. Every day it’s more evident that she’s growing up. Like she said, 3-years from now she’ll be 12-years-old and deep into tween territory. My daughter is already changing. Not her appearance so much as her ability to accept the change that’s coming. And to me that’s even scarier.

You may wonder, why I cringe so hard at the thought of her growing up and her very casual use of the word breasts. How it is that one word makes me coil into a ball like Nikki Minaj listening to The Emancipation of Mimi… It’s not necessarily the word breasts, it’s the fear it brings with it. It means more than just the end of childhood. It means looming sexuality. It means she will be objectified for her body. It means the risk of breast cancer. Yes, I fear breast cancer. It is in our family. Tucked away in our genetic code like an unexploded land mine waiting patiently to claim a casualty. All of these things come with breasts.

I didn’t expect all of this to happen so soon. I didn’t expect to fear maturation. All those things people tell you–all those cliches about babies growing up overnight. One minute you’re rocking them to sleep, smelling their sweet little lavender scented heads and the next moment you’re sending them off to college. Those cliches–they’re all true. Every last one of them. Take heed and hug your little babies. Hold them close, because they have a preprogrammed agenda. Our babies want to grow up.

I was hoping to leave this on a happy note, like I had somehow figured out a way to deal with my daughter growing up and becoming a young woman. Honestly it didn’t feel like it was going to happen. Then tonight before climbing up into the top bunk she came flying at me like a WWE wrestler. We went crashing to the ground together.  She pinned me to the ground and pinched my nose then asked me if she was still my baby. I pinched her nose back and said always and forever.

As she trudged off to bed I sat on the floor for a minute and took it all in. I can cope with this. I can deal with my little girl changing. I can be the dad that doesn’t clasp his hands over his ears when she says the word breasts, or when she informs me of her first period. I can deal with her having to wear a training bra (do they still call them that?). But I’m gonna need many more hugs, and so many more sweet laughs before I’m ready for her to grow up. And Don Henley, if you’re reading this… You’ll get yours. You’ll. Get. Yours.