Posted by Nathalie Laitmon of Suburban Misfit Mom on March 15, 2015 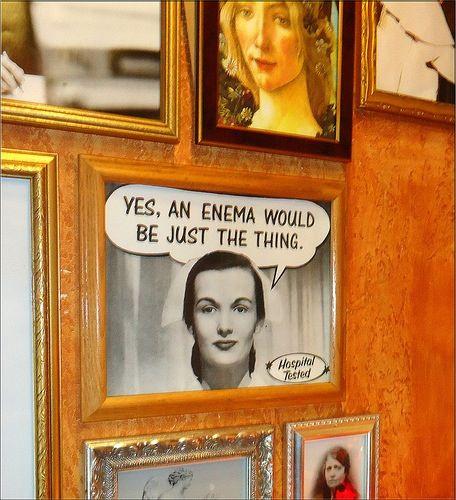 At times, in the suburbs, it can be hard to find meaning.  At a recent party, after hearing all about a fiber cracker diet that sounded a lot like a self-water boarding experience, this SMM was left speechless.  Why not eat a little less? I naively asked, for which I was promptly and rightfully ignored (not everyone has good metabolism. I realize that.)

Even at the best of parties, in this case with hand-mulched mojitos the signature house drink alongside a plethora of imported olives, Fleetwood Mac blaring in the background, it can be difficult to find a real deal conversation in the midst of so many energies colliding in one small space.  Some people get bigger.  I tend to brink on somewhere between Lilly Tomlin’s Incredible Shrinking Woman and Stuart the Mouse.

And then, the Universe handed me a pearl which focused my empathies and compassion so much, I have not digested food the same since.  One of our beautiful, buxom friends shared that she does not shit.  Not in any sane reasonable way, we came to find.  What?  No Shitting?  We gasped, that sounds horrible.  I stuffed more cheese into my mouth.  We were deeply affected.  How could this thin beauty be suffering so, not on the outside at all, but at times not even being able to go without the help of colonics?

Sure, it’s all the rage in Greenwich, a nurse friend of mine who works with a cosmetic surgeon, later confided.  The girls come in together.

My Farrah Fawcett look-alike continued.  “Our friend so-and-so felt so bad for me, she offered to come over one Sunday and administer the enema herself.  What a great friend!”

And that, my friends, is one helluva a good friend in the suburbs.  There’s meaning out here after all.