Posted by Melissa Jacobowitz of Suburban Misfit Mom on October 10, 2016 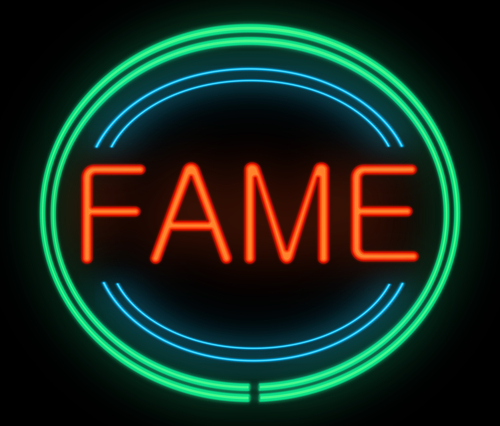 Manhattan is one of those places where you’d expect to see celebrities out and about.  But even with all my years of working in Manhattan, I hardy ever saw any.  Maybe they blend in a little more in the city?  Or more likely is that we just ran in different circles. Bummer.  My best claim to fame was a Woody Allen and Soon Yi sighting years and years ago – they were walking across the street as my family and I were eating at a diner on the Upper West Side.

Once I stopped working in Manhattan I figured my hope was over.  Where would I see all the famous, pretty people now?  But wouldn’t you know that I’m having many more glimpses of the noteworthy folk up here in suburbia?   I envisioned celebrities living “other places” – not in the same town that little ol’ me lives, right?  Don’t they live in flashy places where all the action is?  New York City, Los Angeles, Paris, London, etc.  Somewhere more exciting for sure – but most definitely not in the ‘burbs?

On a recent Saturday afternoon my daughter and I ventured to the local Target.  It was a beautiful fall day outside, but this place was a  madhouse.  It seemed like the whole town must have been there!  Including Jeffrey Tambor!  The dude that just won the Emmy.  He was pretty unassuming and I kept looking around to see if other Target shoppers noticed him.  And in this day and age of social media, I had to post it on Facebook (because, yes, that’s what I do.)   Others jumped in and commented on the post.  Some had seen him in other local stores – and one didn’t have the kindest story about him either.  Deflated thoughts about the superstar, but that little peek was most definitely the highlight of my day.

A couple of years ago when (sigh) I was using my gym membership I spied Bruce Willis.   I was heading to spin class and I walk past this man who looked so familiar, but I couldn’t place him – until I heard his voice!  OMG – Bruce Willis!! Ah! I walked reallllly slow past him.  I’ve always felt an odd connection with him because we share a birthday.  Not birthdate – cause he’s 15 years older than me, but our birthdays are on the same day.  And I can’t imagine that he doesn’t feel it too.   Anyway, so here I am, suburban mom headed to spin class feeling like the popular girl because I walked by Bruce Willis.  I ran into the room like a teenage girl loudly whispering “Bruce Willis!  Out there!  By reception!”   Women booked out of that room!  I stayed behind because I didn’t want Bruce to know that I was the one who spilled his cover.  I couldn’t have my birthday bud mad at me.  Personally I never saw him at the gym again.   It’s entirely possible he quit and started receiving private training to avoid all of us star-struck suburban moms.

And then my dual Rob Thomas sightings (from Matchbox Twenty) once in a liquor store, looking cute, and once at the local diner, looking even cuter.  The latter time we were out to dinner with another family and this lady (me) heads to the bathroom….and there’s Rob Thomas sitting at the counter like a regular ol’ Joe.  Who does he think he is?….  This  lady (me) runs back to table before hitting the bathroom because I had to tell everyone that very second.  Again I approached the group with the loud whispering, but this time I added in some subtle finger pointing in the direction to where Rob was sitting.   I assume that I made it to the bathroom eventually, but I don’t remember that part.

I have also spotted Brendan Fraser at a local carnival a few years ago. On the bumper cars! Is the allowed to do that?   And Ben Stiller from a distance on the soccer field.   Just sitting there in the bleachers alone.  How does Ben Stiller get more “alone” time than I do?  And Donald Trump’s granddaughter was on my daughter’s soccer team, so I got the pleasure of seeing Donald Jr. and his wife.  They also all seemed normal!  (Yes, the Trumps too….and that little girl was pretty good at soccer.)

What’s with celebrity sightings that causes giddiness?  Why do celebrities seem bigger than life?  What gives?   They people just like you and me, right?  Right?? ……UM NO!  Of course they aren’t.   They are famous!  They are on TV, in the movies, they sing….of course they are different than you and me!

It’s a little like seeing that long lost friend that we haven’t seen in a while.  In reality, it often it isn’t even the “real life” person that we care about, but rather their characters.   I haven’t seen Transparent, but with Jeffrey Tambor, I automatically I thought George Bluth from Arrested Development.  And Bruce Willis?  Automatically sexy ex-cop John McClane from Die Hard.  And surely Rob Thomas wrote at least one of his songs about me.

Celebrity sightings are a pretty exciting moment for a fan, especially if you’re just in the midst of doing your daily  errands!   I just think it’s cool and fun – maybe I should be mature enough not to even think twice – they have their life and I have mine.  They’re entitled to their privacy and I can respect that (slightly).  But c’mon! Their stardom, talent, skills and “overall being” are often quite admirable.  That’s really all it is.  How could you not look twice (or 3 times, 4 times) when you spy a celeb?  Most likely I’m not to apt to bother them for a pic or an autograph…..I might just act like a teenage girl behind their back though.

So ok, I guess I’ve been able to spot a star or two in the ‘burbs.  Maybe they are more noticeable up here because it’s completely unexpected and they stick out like a sore thumb?  Though surely Jeffrey just wanted to be left alone to scan his goods into the Target Cartwheel app and get 5% off with his Target credit card upon checkout.   Because he is just a regular person like you and I.   That’s why I took the trip to Target, so I can imagine Jeffrey had the same goal……..that Cartwheel app has saved me over $280 so far, ya know.  Take that Jeffrey!

It just adds a little entertainment (see what I did there?) into the day.  So Jeffrey, Bruce, Rob and Brendan – thanks for spicing up for me.  It’s good to know that I run in the same circles as you guys now. Therefore I’m obviously much cooler than I thought – well, at least here in suburbia.