Posted by Michael Badger of Suburban Misfit Mom on November 16, 2016 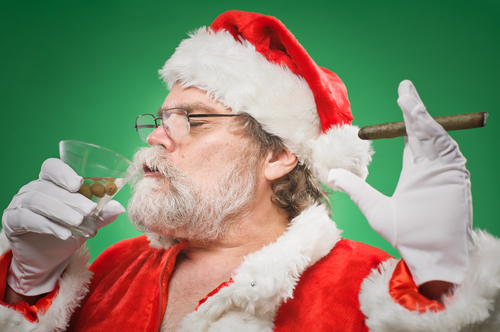 “Because the Elf on the Shelf isn’t real.” The words left my mouth and I didn’t stop them. They were glassy–sharp right angles delivered to the wrong person. I meant the words but they weren’t for my daughter. They were aimed at parents proliferating yet another new and decidedly stupid tradition in a holiday season already fraught with excessive ornamentation.

Minutes before, my nine-year-old daughter had asked, “Why don’t we have an elf on our shelf?”, for the hundredth time and I lost it. I watched my daughter’s eyes get big after my declaration, knowing that a torrent of questions was about to pour out of her like the elevator scene in The Shining. And they would all eventually lead back to the big question: Is Santa Claus real?

For the most part I like Santa Claus. He takes the heat when I forget batteries, mix up sizes or forget which Shopkins each girl already has. I am, however, somewhat annoyed that he is given credit for my hard work. I don’t like staying up till 2am wrapping gifts just so Santa can bask in my glow. Also, I hate that I have to buy several different types of wrapping paper that our girls haven’t already seen so we don’t blow the mendacity of Santa Claus. It feels like I’m being suckered by a carpetbagger when I have to give in to all these so-called traditions. But I also balk at my girls’ understanding that Santa brings toys to all the good girls and boys. Lots of good kids growing up in poverty will get screwed this year by a holiday hell bent on putting heartless corporations in the black. That’s not cynical, that’s honest. I realize honesty has no place at Christmas, but I think it’s time some honesty was introduced.

But, but… What about the magic of Christmas, you might say? Yes, I play along with most of it. I sing Christmas carols, watch Home Alone and put out cookies and milk for Santa. I even reluctantly got on board with putting out carrots for the reindeer. Another new tradition. Like all good parents I do my best to trick my kids into believing in the generosity of a man in a red suit that delivers presents to a billion children in one night. Well, except for those poor children (Santa calls them underprivileged) I was talking about. Some will be lucky enough to get a gift from the angel tree or another charity, but for the most part Corporate Santa will forget them again this year.

The thing is, everyone from organized religion to the mom and pop boutiques has their fingers in your Christmas. Every business wants your holiday dollars, and they’re all dependent on those accepted lies so they can turn a buck. The toy companies are the least of it. It’s the peddlers: Target, Wal-Mart, Amazon that have a choke hold on Christmas. They want to get every penny they can possibly squeeze from consumers. Hence the quickly fabricated and nonsensical Elf on the Shelf.

To the point, we didn’t need to add an elf to this already spiked bowl of nog. This torrid bacchanalia of the “haves and have-nots” already relies on too many falsehoods to involve this Christmas sleeper agent disguised as an elf.

And, it’s not just the Elf with its smug little face that bothers me; what seems to irritate me the most is its origins in consumerism and not in the magic of Christmas. It’s a fraud, a sham, a dodge. I can almost hear the conversation between the people who created this delicious scam:

Marketing Bro 1: Listen up guys, our shareholders only made a 1000% profit last Christmas. We can do better! So how do we get parents to buy more crap?

Marketing Bro 2: I don’t know sir, I mean we already have them buying enormous $75 bows to put on new cars. I doubt we can get them to buy more crap.

Bro 1: Here me out, what if we invented a new tradition for Christmas?

Bro 2: C’mon, how can we add a new tradition to Christmas?

Bro 1: I’ll tell you how; disgruntled parents! Parents get all kinds of exhausted and short-tempered this time of year. Parents are still using the old call to Santa Claus at the North Pole when their kids are being shits right?

Bro 2: I see where you’re going with this, sir!

Bro 1: What if we came up with a behavior monitoring system that is cute, expensive and will do the parents’ passive aggressive Santa shaming job for them?

Eh Voila! I give you, Elf on the Shelf!

Parents! We don’t have to buy into this corporate induced pleonexia. We can forgo it and go back to the roots of the holiday.

Equally disturbing is the premise that this Elf is in your home watching your children, assessing their behavior and dispensing subtle intimidation. Seriously? And what about the Elf messes? Grown-up Moms and Dads scattering flour around their kitchen that they themselves will have to clean up. And what about the good folks posing the Elf in randy positions with Barbie dolls? I just can’t wrap my head around it. I can’t. I just can’t!

With irritation, I equate these new and quickly fabricated traditions to those confused and probably demented people who add butter to coffee. You’re taking something great and you think you’re adding more greatness to it, but really you’re committing atrocities. Horrible atrocities! The Elf on the Shelf is completely unnecessary. It’s like Scientology. Religion was already shady enough without someone adding their weird aluminum spaceship beliefs to the mix. Am I saying that the Elf on the Shelf is the Scientology of Christmas? Yes I am. Because the Elf on the Shelf is to Christmas, what Tom Cruise is to five feet ten inches. Absolute Bullshit. Mother Fucker, you’re 5’7”! Correspondingly, the Elf is a symbol of unchecked greed and duplicity. One more yuletide lie to throw on the fire.

What will come next? Perhaps Christmas Carols will be replaced by a 10” tall dancing Santa Claus… Wait. Bad example.

I recognize that retailers need our money to stay solvent, but must they also suck the soul out of Christmas in the process? I cannot be a part of it. I am taking a stand. I will not have my love of Christmas siphoned out of me by an 8” tall smirking Elf. Like the Galactic Overlord, Xenu and John Travolta’s fake hair, the Elf is not welcome in my home. Take your greedy mittened hands out of my wallet, Elf. Be gone. Back to the Chinese sweat shop from whence you sprang.

My feelings aside, there was probably a better way to drive home my thoughts about the Elf where my daughter was concerned. So when I looked at my daughter all round-eyed and waiting for an answer, no longer sure what to believe anymore, I knew I had to fix it. It was my fault that her eyes were opened to the blank check Americans write to Corporate America every December. I had to handle this new revelation delicately or she wouldn’t know what was fact and what was fiction. Should I continue the massive cover-up? Do I let her in on one of the biggest ruses of our young capitalist culture? Blow her little mind up with the truth about wealthy corporations shoving prefabricated Christmas traditions down our throats? Tell her there’s no Santa? Carefully, I took a deep breath and issued this explanation:

“Santa Claus is real, the Elf’s not. Don’t tell your friends.”