Heartfelt Message from the Hubs

Posted by Tricia Jelonek of Suburban Misfit Mom on March 8, 2017 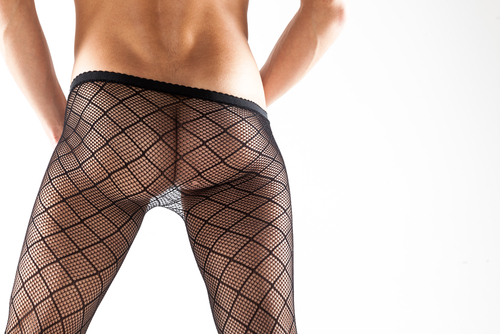 Did you ever have one of those occasions where you don’t what the hell happened or how you got there…like seeing your hubby rock some white thigh highs for example? Now, in his defense, he did just have a total knee replacement. And technically they were compression stockings. But hey…they looked just like thigh highs with the same totally annoying not-at-all comfortable elastic at the top. The same you have to be careful with because you may put a run in them from constantly pulling those suckers up. I even had to wash his thigh highs in the sink and then laid them flat to dry (not to mention picking out all the stray man hairs).

He’s not held back on complaining or bitching about having to wear them either. Like I have no freaking clue how hard it is keeping them up on your thighs and not down around your ankles when walking around. At least he didn’t have to try and be all sexy goddess in them while wearing heels. I secretly laughed every time I heard him say “damn, there’s another run”… just saying. I did my wifely duties by trying to help him out. Showing him how to properly put them on… how to be gentle when pulling them up… or how not to use finger nails when touching them anywhere. However, the one thing I could not help with was how not to get his leg hair stuck in the elastic band. That was pretty much a “you’re on your own there kinda thing”. I absolutely have to shave my legs Every. Damn. Day. It throws off my whole universe if I don’t and who has time to deal with that crap?

I guess you can say it was about a week into to wearing them when the hubs had his “aha” moment. The love of my life looked at me and said “I sincerely apologize to you and women everywhere for us men asking y’all to wear these damn things! I won’t ever ask you to put them on again”. I mean it totally gave him a new appreciation for all the shit we torture ourselves doing just so we can look good! From putting on makeup, fixing our hair, or applying all the lotions and perfumes… he totally gets it. Seriously… his daily routine consists of getting up, brushing his hair, dragging a rag across his ass and he’s ready to go (so totally his words). Hell, he even went as far as going with me to get waxed. Although it was just his back being waxed and not his you know what area… I was thankful he got the whole OMG hot wax ripping out all your hair experience. And trust me, his hair follicles are like three hairs for every one so I know that shit had to hurt.

It’s not that the love of my life expects me to be in full makeup and all hot sexy goddess on a daily basis (seriously, I work from home so unless I am going out or seeing anybody other than my asshole dogs… makeup just isn’t happening…period). But it’s the fact that when I do go all total sexy goddess…he now truly appreciates all the time and effort it took to get that way. And I couldn’t love him any more for it. Luckily, the doctor finally released the hubs from his thigh high prison sentence. Although he is elated to be rid of those for good…for me the image of him pulling on his man highs while cursing will live on forever.