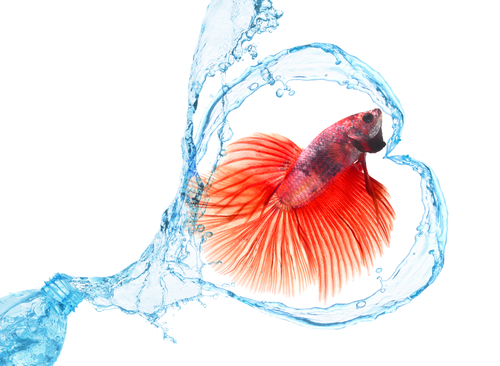 It was a little after 1am when I woke up and heard my 9-year-old son crying. I ran to his room and asked what was wrong. Through sobs, he said he was afraid his fish were going to die soon. It sounds trivial, but it’s actually a legitimate concern considering the events of the past few months.

My mother-in-law died right before Christmas after a long battle with kidney disease. It was the first time my kids had ever been to a funeral. They saw family members crying and telling stories and hugging strangers.

My uncle died less than two months later after a long battle with heart disease. Another funeral, more crying and stories and hugging strangers.

And in between those two events, one of my son’s fish, a little albino rainbow shark, died after a long battle with… well, after about a year and a half of being chased around the aquarium by a very small but very aggressive red tail shark. There hasn’t been a funeral yet, but the fish is resting peacefully in our freezer, waiting for the ground to thaw so he can be buried under a tree in our backyard, as is our family’s custom when it comes to burying our dead. (Note: Not the human variety. I’m pretty sure our homeowner’s association would frown upon that.)

A dead fish might not seem like a big deal, but for my son it really was. The aquarium is in his room. He talks to his fish every day. He drifts off to sleep at night watching them flit around the tank.

It was the third time in two weeks my son had woken up in the night, fretting about death. Specifically the death of his two remaining fish, but realistically… Death in general. I know it’s a lot of emotions to process at such a young age and in such a short span of time. He’s being confronted with mortality and it’s confusing and terrifying.

I tried to comfort him. I told him we get pets knowing that we’ll most likely outlive them. We know they’ll die someday so our job is to love them and give them the best life we can while they’re here.

I told him I can’t guarantee that no more family members will die, because people die. It happens whether we want it to or not. We just have to love them and enjoy them and make the most of our time together. And when they’re gone we’ll have memories and stories we can tell when we want to make them seem not so far away.

So I told him stories.

I told him how when his grandmother realized she was terminal, she said one thing she wanted to do was to travel with her family. She rented a huge beach house in Florida and had her three kids and their spouses and all eight of her grandchildren spend a week together. I reminded him about how much she enjoyed watching him and his sister swim in the ocean for the first time. It made her smile.

I told him how when I was five years old my family moved halfway across the country. The first stop we made in our new hometown was at my uncle’s pharmacy, where he also ran a soda counter. I was nervous and scared, so my uncle sat me on one of those plastic-covered stools that spun around in circles and served me up my very first cherry Coke. It was a frosted glass of Coca-Cola straight from the fountain, with a big squirt (or maybe 2 or 3) of bright red cherry-flavored syrup stirred in. It’s one of my favorite memories and it always makes me smile.

We even recalled stories about Raingutter, the recently-departed fish, who had held his own for a long time in that big tank with a feisty little shark and a giant plecostomus named Spot, which I firmly believe to be the ugliest fish in the world. At that point my son disagreed with me. He thinks Spot is cute, but it always makes him smile when I express my disgust for that ugly thing.

I wish I could tell my kids they’ll never again lose a person or a pet they love, but that’s just not true. Sometimes things don’t turn out ok. Death happens, and it’s sad. But what I CAN do is tell stories to help them remember, and to make them smile, and to maybe make those fish in the backyard seem not so far away.