Posted by Jill Wexler of Suburban Misfit Mom on December 19, 2016 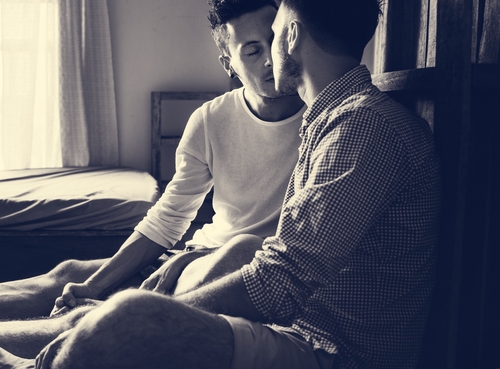 I’m in a safe space, right?  Like a judgement-free zone of sorts, right?

Whew. I need to share with you my latest obsession.  The obsession that fulfills the “escapism” need I have.  And I need to get answers on a couple of things.

You ready for this?

Yep. You read that right.

But Holy Drag Queens, Batman.  I cannot stop.  And there are two tropes within this genre that complexly and utterly baffle me.  And I need to get your thoughts.

But first.  How many of you have read gay male romance?  I figured as much.  And it turns out, I’m late to the game, based on the amount of books published a few years ago.  Bygones.

How did I stumble onto this as my newest escapism?  Welllllllll, it’s a long story.   Okay, it’s not.  I love to read; that has always been my escapism.  I will get obsessed with certain authors or genres and stick with them for a while.  The genre I was previously addicted to was what I call “fluff” reading, but the literary world refers to as “contemporary romance” or, informally, “chick-lit.”  They tend to have a lot of humor in their writing and while the romance scenarios aren’t too far-fetched, they usually have some twists and turns in them that you sometimes roll your eyes at.  But they are fun easy reads and the authors I adore do a good job with character development and humor.

I went looking online for a “authors like so-n-so” and found myself on a site for writers of a different caliber.  It’s a literary fiction site with a lot of categories to choose from.  Not necessarily fanfiction, although that is there too.  Annnnnnnnnd, one of the categories was Gay Male.  And once I clicked on it, I was hooked.

Wait.  This is a safe space so I can be honest.

The “literary fiction site” is erotica.  There.  I said it.  But there are some writers who are decent and write out actual stories.  You really have to wade through a lot to find them though.  Most of the “stories” are a “literary” quickie for those not needing substance but need something graphic to get off on.  So when I say I got hooked on the Gay Male genre there, please understand that I did a lot of wading (ho boy a lot) but it was the authors who wrote honest-to-goodness stories who did the hooking, so to speak.

Segue.  I probably spent a ridiculous amount of time on browsing through the authors of what I deemed “not really a story,” with the main goal of trying to determine if that author was male or female.  Some names like “bigdick10” seem like a dead giveaway, while others are so generic you just don’t know.  But.  I concluded (and this is TOTALLY my own conclusion here and by no means scientific at all) that if any story contains length and girth of the main character’s penis, it is probably a male writer.  Also, if the female character says things like “give it to me in the ass sir,” I feel like that’s a male writer too.  But I could just be a sheltered prude, who knows (I have yet to take a poll at work on this because I’m pretty sure HR would call me in).

Anyway, once I had exhausted a few of the good authors in the Gay Male category, I decided I wanted some full-fledged books to read.  So I hit the Google and was not disappointed.

And I’ve been in Gay Male Romance Heaven ever since.

Like the plain Romance category, the Gay Male Romance has its tropes, most are universal and some are wildly different.  For example, the friends-to-lovers trope is big in both genres (and oh…a favorite of mine…in both genres).  The good-girl-reforms-bad-boy trope becomes good-boy-reforms-bad-boy trope.  Opposites attract…instead of professional corporate male/female and working class, it is flamboyant male and either jeans-wearing male or suit-wearing male.  Some things are timeless and cross all universes, it seems.

But.  There’s two fascinating tropes that make me tilt my head like a puppy.

The first is abbreviated as M/M mpreg.  The first couple times I ran into this, I was simply reading the synopsis and it didn’t do much for me.  I’m not a big Sci-Fi person and that abbreviation seemed to be Sci-Fi…you know, wolves and dominant animals acting as humans.  The “Twilight” of Gay Male Romance. I pretty much just ignored it until I wondered what the “mpreg” was.  Have you figured it out?  Yeah, pregnancy.  Men knocking up their significant others, who also happen to be male.

And this is not a small trope either.

Seriously, what is this about?  I am so desperate to have a conversation with someone on this.  I will say it appears that in the full-fledged book world of Gay Male Romance, the majority of the authors are female (which is a whole other conversation).  Which begs the question of:   Do men want to spawn their own children out of themselves (you know, giving birth somehow) or is it the female authors’ belief that procreation makes a pair of lovers finally complete as a family?

Again, I may be naïve but I don’t think many men want to experience the joys of pregnancy and birth firsthand, and I don’t think gay men, as a collective group (I just heard the exasperated sighs of millions of gay men) feel any different.  But someone obviously thinks this because these books sell.  I mean, sure, men want kids and a family.  But the whole pregnancy thing?  And I’ve yet to run across this with M/F romance, wherein the male wants to gestate.  So is this the female authors’ needs or maybe is this what the readers want (the internet will tell you that the biggest consumer of gay male romance is women)?

The second trope that fascinates me is known as “gay for you.”  It’s the one where a perfectly straight, always heterosexual, never ever even considered playing for the same team meets The One man and out of nowhere has new thoughts and desires.

True love conquers orientation.  And it’s not lust, it’s love.  That is always made clear by the authors.

It sounds a bit like the good-girl-reforms-bad-boy, right?  Bringing the one you love around to your way of thinking.  But if you think about it, it’s nothing like that!  There isn’t a trope in the entire world of regular romance that can compare…because if it’s about switching teams, then the trope is automatically re-genre-ed to either Gay Male or probably Lesbian (I haven’t delved into that genre and I’m sure we could have a field day analyzing that).

I confess though, I’ve read a lot in this trope.

And this trope is big, people, with lots of books to offer.  But why is this? Is it because gay men want to convert the straight men (again, just heard the collective sighs of gay men everywhere going “stop saying we are all the same” – I know that, I know that!!!)?  My gut says no.  Is it because we feel that all men are so competitive that they’ll stop at nothing?  Eh, not sure about that either.  Is it the idea that a man (insert female cackle here) could feel so many feelings and such love that he would do whatever it takes to be with The One?  Again, eh.

Whatever it is (and ugh, I need to know!), the authors and the readers love this trope.  I want to say that my fascination with it is because there is nothing comparable in regular romance but I bet it has more to do with the “true love conquers all” bit.  I just don’t know!

As of right now, I’ve exhausted my paychecks at Amazon on this genre since my local library system doesn’t carry this genre at all (hello conservative state).  And I can feel the obsession losing speed, so I’m sure I’ll be onto another trope by spring.  But I’ll say it again…

[…] while back, I told you that I fell into reading gay male romance and what a trip that was.  At the time that I wrote that, I didn’t have many people to talk to […]