Posted by Amber Pittman of Suburban Misfit Mom on March 16, 2016 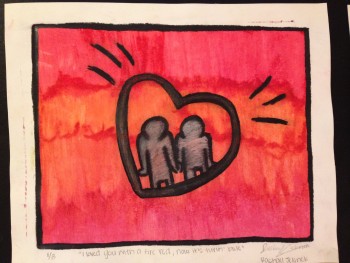 I am notoriously horrible at dating in real life. I have resting bitch face, I have been told by many I am intimidating, and I am typically utterly clueless when someone is attempting to flirt with me. Which is why I decided to try online dating in the first place.

It hasn’t been completely disastrous; I mean, I’ve made friends with guys that I met through a date that just wasn’t meshing romantically, I have even had semi-serious dates and boyfriends along the way, but there are always the creeps. The ones who won’t take me ignoring or insulting them as a no, the ones who had a great time on our date, which makes me wonder if they were even on the same date as I was, and the ones that think everyone wants to see a picture of their junk (here’s a hint: we don’t). But what happens when you are harmlessly scrolling through profiles and run across people you know? For instance:

A guy you went to school with that you had a crush on. HAD

These are super awkward because you look at them and one part of your brain that is still 16-years-old is all “YES! I finally have a chance!” but then the smart part of your brain is like “Ewww… He couldn’t have looked like that then, right? And he had to have had at least a rudimentary knowledge of spelling, right?” Sadly these guys ALWAYS know I had that crush, cause I obviously had zero chill, and what wasn’t looking so appealing back in the late-90s is looking fairly magnificent now (I don’t blame them, I have aged well). So how do you acknowledge you remember them without making them think you ever want to see them again – certainly not in a romantic way? No clue. If you figure it out let me know.

Is this a way to show loyalty to our high school? Like because we shared a lunchroom and the same recycled air for eight hours a day you magically get the Golden Ticket. That’s really not how that works at all. Not even a little bit. The fact that I walked the same hallowed halls with you means nothing to me now. Although it’s nice to see that creeps never really change, they just get older.

Guys who are dating your friends

I was never really a chick who had a lot of girlfriends. But as I have gotten older I realize that Snooki was right. You DO need girlfriends. And when you have them, you talk to them. And you share pictures, and screen shots of texts and I KNOW that you are totally dating my friend, even if you don’t know that I know. And I AM going to blow up your spot, because you are a Grade A mega creeper from Creeperville. I have also found a couple HUSBANDS on dating sites. Yes, vow-taking, baby-making, dinner dishes-washing legit husbands. And I will tell on them. Every single time.

This is awkward even writing it here, because we are friends on social media, which means we either ignore it (please!) or have to discuss the fact that you were on a dating website and I saw you. And when I took my kid to lessons (thankfully we quit) I had to look at you knowing you saw me and that I saw you, and I know how awful you are at writing profiles, and how you really need a new picture. But there’s no way to say that, so I just have to feel weird around you, because I read on your profile that you’re looking for casual sex. I’m not one to judge normally, but that skeeves me out. So I know I have a stank face on while I stare at you teaching my kid. I have also seen teachers at his school, but they aren’t ones I interact with often, so it’s not weird. I like it when they don’t make it weird.

All of this is almost enough to turn me off online dating altogether. That coupled with the fact that my son informed me (not for the first time) that I wasn’t allowed to have a boyfriend. But it’s honestly entertaining, and I have too many friends who met people they ended up marrying from these sites to lose hope completely. But if one more teacher or coach of my kid shows up, I might have to reconsider.

(Artwork provided by Rachael Jelonek, the talented daughter of one of our writers.)