I Am Mother. Hear Me Roar.

Posted by Amber of Suburban Misfit Mom on January 17, 2017 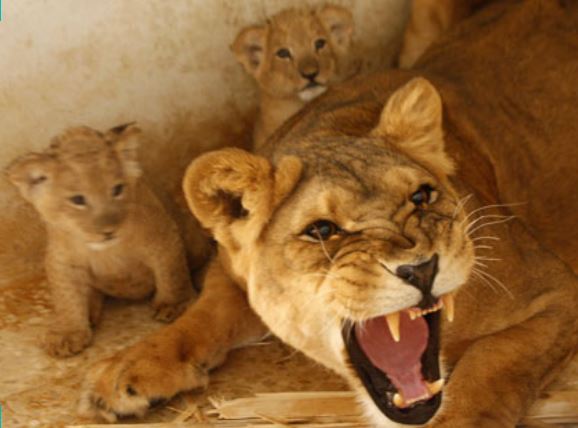 The day after Christmas my family and I decided to go see the movie “Sing” at a local movie theater.

While walking out of the movie, my kids were giddy, running around happily and laughing about the movie. We took the escalator down to the ground floor where the parking garage is.   My husband scooped up our youngest son and walked out ahead of us.

My 7 year old has a tendency to run way ahead of us and not pay attention in parking lots. So when he was walking in the center area of the parking garage among the cars and the 4 or 5 kids that looked to be about 9 or 10 years old on their bikes, I said, “Julian, come over by me …away from the cars.”

One of the kids who was riding his bike circled very close to him and said, “Yeah, Julian. What’s up?”

My son searched the boy’s face trying to see if he recognized him. Julian didn’t realize this kid was messing with him and took it at face value that if he called him by name then he must know him. As I watched my son study this kid’s face for any recollection of who he was, my heart sank. I realized this was a first. My son was being toyed with by this older kid.  He shrugged off the weird encounter and decided to run up ahead to catch up to his little brother and my husband.

Another kid on a bike next to my sister and me pedaled as fast as he could toward an oncoming car in the parking garage. He pretended he was going to crash head on into a car that had just pulled into the garage. Just before his front wheel hit the bumper of that car, the boy hit the brakes and skidded to the side missing the car by a hair and erupting into laughter.  I peered in and saw it was a family of four inside-looking confused and shocked.

I couldn’t help but say something to this young boy who was finding glee in terrorizing people by making them think he was about to hit them (as we all know it would turn out way worse for the driver in that scenario since it would look to be the driver’s fault). I told him he was lucky and even though he was playing around, he could have nailed the car and gotten hurt in the process. He looked at me like he was surprised I cared and smiled deviously.

While I was having this little exchange, the other boy had ridden up ahead closer to where my older son was again. He was riding in circles nearer and nearer to where my son was walking. I noticed my husband starting to pay attention to the proximity of this kid to our kid, although he wasn’t aware of the first encounter because he had been up ahead.

At this point my husband and two sons were about 20-25 feet in front of my sister and me. The boy with his eye on my 7 year old circled back so that he had the full length of the garage ahead of him. He swept past me gaining speed while pedaling faster and faster. I became sharply aware that my son was at this kid’s finish line. Was this really happening? As if in slow motion: my eyes saw, my instincts knew, and my adrenaline confirmed that this punk’s plan was to run my child over.

Any parent that has experienced their child being threatened can probably relate to the version of myself that took over. Normal me was gone. I went from nice, friendly, just-sat-in-a-warm-and-fuzzy-kids-cartoon-movie to don’t you dare F with my family.

I blurted out something to the effect of “What are you doing? Get the hell away from him! Watch out!” all in one hi-pitched scream. As I started to run toward the kid, he hit the brakes and did the side skid out where the back tire kicks out and the bike abruptly stops. The back tire nicked my kid’s pant leg and I was instantly proud of my boy’s spidey-like ability to jump backwards with such short notice. My pride was quickly replaced with sadness when I realized how confused he was that a stranger just a few years older than him would try to hurt him for no apparent reason.

The randomness of it all is a bit creepy.  I can read the headline now: Family’s fun night at movies ends in Disaster: 7 year old run over with bike.

I wish I could say it ends there, but it doesn’t. The rest of my family was a bit freaked out and hurriedly getting into the car.

This punk had ZERO fear, which sends a chill through you as a parent. And better yet, he was not satisfied with whatever he was trying to achieve. He was looming around our car until my husband reversed out of the parking spot. He then started pedaling alongside our car and at one point put his hand on the car as if he was holding on! For as long as he could keep up he continued like this and then flipped the middle finger to my kid’s window. My husband pressed the brakes here and there out of fear that he might accidentally run this kid over.  I never dropped my stare, and he stared right back emotionless. My emotions, however, were in overdrive. I flipped him the bird in return and shouted some angry profanity (another first in front of the kids…woopsie).  I really wanted to jump out of the car and unleash a can of whoop ass.

“Why did that boy put his middle finger up at us?” I could see the wheels churning in my son’s mind as he asked the question.

All I could offer as an explanation was that there are bad people out there that raise children to be just as bad. This is because they don’t take care of them or teach them how to treat other people.  I wish I could have said it with a calm and witty confidence, but I assure you it didn’t come out as articulately as I am writing this now.

I called the police and reported it.  My thought was that if we didn’t, then they would likely take it too far and harm a family or continue to harass other families as the theater was emptying out.

Later, after I had finally calmed down, I felt like the only thing I had taught my kids in that moment was to flip someone off! I wish I could have controlled my anger better. But the truth is when we’re protecting our loved ones, emotion is uninhibited and raw. In fact, it felt as though an unfamiliar layer in my personality was uncovered: let’s call it the “protector”  layer. What’s the saying? Hell hath no fury like a woman scorned. Well Hell hath no fury like a mother with one of her cubs being threatened. At least for this lioness right here.

Now that my kids have been exposed to random acts of meanness, I realize obviously they cannot be protected with my bubble of love. However, maybe having this sort of blip in their matrix had a take home message.  Perhaps they’ve learned to look their offender in the eye and stand up for themselves.

In the end, I only lost sleep over this incident for one night. You know why? Because I realized that my boys walked away from that occurrence knowing one thing’s for sure. Mama always has their back.