I Can’t Do What You Do

Posted by marisa of Suburban Misfit Mom on September 20, 2016 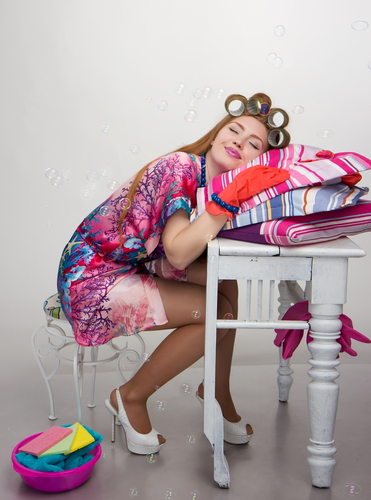 I’m on the phone with one of my childhood best friends listening to her talk about how her job is going, various shenanigans with her two children, and how she’s keeping everything all together. I think about all she’s telling me and I respond, “I can’t do what you do”. I can’t imagine having a job and raising my child without falling into a deep coma from all the pressure and constant chaos every single day. Just being a stay-at-home mother has proven far more exhausting than I ever imagined. I used to have two part time jobs in addition to my full time office position. I thought leaving the office to raise my daughter was going to be a breeze. My husband and I laughed about my need to keep busy, thinking that I’d be the most bored mother to ever stay at home with a child. It turns out the laugh was on us. I haven’t been bored; not for a second. In fact, I’ve been more tired than I ever was working my previously hectic schedule.

When I heard my friend’s response I almost thought I’d imagined it. Did she really just say, “No. Your job is way more difficult. I could never do what you do all day. I’d go crazy”. When I asked what she meant she explained that her job was not just a source of income, it was an escape from the craziness of being a mom. Going to work was in part a relief from the laundry, cleaning, cooking, refereeing, and constant worry that comes with raising children. After hanging up the phone I had a chance to reflect on what she’d told me. I’d never thought about it before.

All of this time I’d been viewing having a job outside the home in addition to raising children to be absolute chaos. I didn’t think about the fact that her children were in daycare during her working hours, so the house wasn’t being ripped to shreds, meals weren’t being cooked and recooked, and she wasn’t dealing with the third meltdown of the day by five o’ clock. Sure she came home tired from her job to her rambunctious brood, but with a smile because she’s missed them all day. I always find when I miss my little one I’m far more tolerant of her little crazy quirks than after being subjected to them for nine hours straight.

When a mother tells another mother, “I can’t do what you do,” it’s probably the greatest compliment in the world. It’s an acknowledgement that one is in awe of the other. It’s telling someone that what they are accomplishing is truly a difficult feat. I’ll readily admit that very often I feel like I’m unable to accomplish as much as some of my friends. One runs a horse farm while taking care of two children, another travels on business before coming home to take care of her husband and kids. I’m exhausted just from being a mother of one, no outside job, no red eye flights, no deadlines, and I can’t imagine taking on much more. I sit and wonder what these other mothers have that I don’t. I’ve always been a hard worker. I’ve never been someone who gives up or enjoys being told she can’t do something. What am I missing as a mother that makes the idea of taking on more so daunting?

The truth is none of us can do exactly what the other mothers around us are doing, because no one is doing anything in the way we envisioned. Everyone’s role as a mother is different. Some mothers have families who provide childcare, while others have no one around to babysit or provide relief. Some women don’t see keeping an immaculate household as a priority, while others work themselves like crazy polishing every last picture frame (yes, that’s me right here). Some women throw themselves completely into their role as a stay-at-home mom while others have children in school or daycare for part of the day to allow time for self-care. Often one is unaware of the inner workings of the families around them.

My day is spent doing laundry, vacuuming, dusting, making lunches, driving my child to activities, participating in activities, shopping for the household, doing dishes, and preparing to do it all over again the next day. I keep a full day, and none of it involves lying around eating bonbons or binge watching Dr.Phil. When looking at it from my perspective of course the idea of taking on an additional outside job seems impossible. I can barely take a shower that lasts longer than six minutes. How my day is run is much different from how other women may run their days.

Working moms have different priorities, or at least, their priorities probably aren’t in the same order as those who live as SAHM’s. They may let the laundry pile up. They may vacuum once a week or once every two weeks. Their husband may be the one who does the shopping, or grandparents may take the children so other things can happen. They let other things wait so they can maintain a balance, and not pass out from a parade of responsibilities. All mothers make sacrifices in one manner or another, just not necessarily in the same ways.

Every mom finds her own way of making things work through a process of give and take. Priorities may differ, but the goal is always the same; be the best mother one can be. It’s important to realize that when you tell someone, “I can’t do what you do,” they in fact probably can’t do what you do either, at least, not without some significant adjustments. It’s important to let our fellow moms know that they are valued, and that we know the work isn’t easy no matter what the circumstance may be; however it’s also important to give ourselves some slack. The lives of the other mothers I find to be intimidating aren’t necessarily a mirror of mine coupled with the added responsibilities. When my friend told me she couldn’t do what I did, it made me realize that what I’m doing is pretty awesome, every bit as awesome as what she is doing, and it meant the world to me. So to those who think they aren’t accomplishing enough in their role as a parent: Relax, you’re doing enough, and know that others are looking at you thinking, “I can’t do what you do”.