I Left A Narcissist. The Last Thing I Want is To Have One For President. 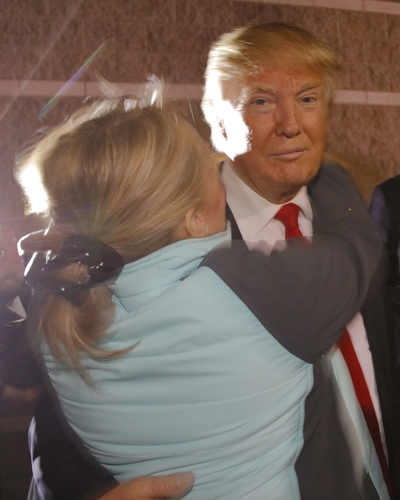 If you have ever been involved with a Narcissist (Narc), whether it be a spouse, ex lover, parent, sibling, etc… then you know as well as I do that Narcs do harm. Narcs are bullies and do whatever it takes to make themselves feel and seem superior to others. They lie, manipulate, talk around direct questions and if ever called out on their stuff, they project and blame. The belief that “I know more than anyone on that issue” is typical and is the underlying theme of a Narc. You can’t tell (or even gently suggest) that the Narc has a warped view of the topic at hand. The Narc behaves as if his thoughts, beliefs and (lack of) feelings are paramount. Nobody can tell a Narc he is wrong and if you waste your time trying, you will be left feeling exhausted and disappointed.

So what does this have to do with Donald Trump? EVERYTHING! When I hear his horrendous speeches and disgusting preaches, I get chills down my back. Why? This man is a Narc! He is a bully! Trump talks around direct questions by believing he should not be doubted simply because “Believe me. I know more about this than anyone.” Really? You know more about foreign affairs, world leaders, domestic relations, women’s issues, healthcare and even democracy? Do you Mr. Trump? No, you don’t. You are a friggin’ Narcissist and that’s EXACTLY what we DON’T need to “make our country great again”. We need compassion, intelligence and the ability to gather people who are experts to help make sound decisions. Mr. Trump is a dictator and is compared to Hitler for good reason. Hitler was a Narc and in shouting his hate messages and instilling fear, he was able to rally people together for his own agenda.

Don’t get me wrong…. I do not believe that Mr. Trump is completely evil. He did not send anyone to gas chambers and concentration camps. I believe he has built successful (and failed) businesses and created jobs for many people (albeit illegal immigrants that he will “if elected” boot out of the country) and is a pretty engaging TV personality (only on The Apprentice). I just believe that as President of the United States, Mr. Trump would make more problems than solve them.

To start, it is known that Narcs will beat to their own drum and refuse to understand (because Narcs cannot) the opinion and beliefs of others. Simply put: if your view differs from the Narc, your view is dismissed as WRONG. So what happens if Mr. Trump doesn’t agree with the laws already established in our country? You can bet he will do and say what he wants anyway, because that’s what Narcs do. What happens if Mr. Trump meets with our World Allies and has a difference of opinion? The Narc behaves like a bratty child, “I don’t agree so we will have to agree to disagree.” Do you think our allies will stay our allies when the leader of our country behaves dismissive, cold and arrogant and appears to be heartless and insensitive? If you have experience with Narcissism, you know the answer.

What I find to be most disturbing is the way he speaks to and about people. He shouts and spews his views at people, demoralizing and even making fun of people who do not agree with him. His disgraceful put-downs on the handicapped, Muslims and especially WOMEN are out right mean! Do we want to teach our children that it is okay to put down others when you don’t agree? Do we want our children to live in a world where the leader of our country thinks it’s okay to mock people’s appearances and personal views? Do we want our daughters to grow up believing that it is OK for a man to speak to women like they are trash, less intelligent and beneath them? In an interview with Oprah in 1988, Trump told the audience, “Ivana and I don’t argue because she does exactly as I tell her to do”…. Enough said?

The way the political scene appears today, Mr. Trump will likely receive the Republican nomination for President. We won’t soon be done listening to more rants, insults and despicable ugliness from this smug Narcissist who incites violence and shameful behavior. As parents and especially as citizens, it is our responsibility to stand up for what is right, regardless of if you are on the right or left. My fear is that this bully, this poor excuse for a “leader”, will continue to grow his base and from that we will see more hate and ultimately more violence.

Mr. Trump says he wants to build a wall. I say build four around him so he is left with the one that really matters to him…himself.