It’s About Hearts, Not Parts

Posted by Jill Wexler of Suburban Misfit Mom on June 14, 2017 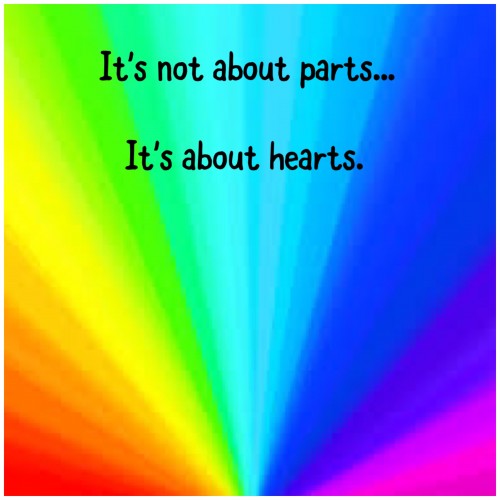 I’m writing this on the anniversary of the Pulse nightclub massacre.  And my heart is breaking again.

A while back, I told you that I fell into reading gay male romance and what a trip that was.  At the time that I wrote that, I didn’t have many people to talk to about it, because…well several reasons.

Then I began joining author and reader groups, where I can get my fix of discussing the books I’m reading as well as the weighty topics within and surrounding books.

Understand that I have always been an open-minded person, but when you live in certain regions, you are not exposed to as much.  I was raised to be an accepting person, and I’m genuinely one of those idiots with zero gaydar (“what do you mean he’s gay?  Seriously?  Huh, who knew?Everybody knew?  Huh.”) and I had no idea that two of my best friends in high school…four years of high school, mind you… were biracial (Japanese/Caucasian and Hispanic/Caucasian) because it simply never occurred to me.

But there’s a difference between being taught to be accepting and actually knowing/seeing why acceptance is so needed.  And after delving into this genre of books, getting to interact with people who have been there/done that, seeing new viewpoints that I never even knew existed, I’m still left befuddled by the hatred.

As a gal named Tina said on a Facebook post, it’s not about parts, it’s about hearts.

I’ve struggled a lot with teaching my children how casual hatred works.  Because “that’s so gay” seems so harmless, right?  Because some slurs don’t sound like slurs, right?  It’s casual because you can slip them into conversations and most people don’t bat an eye.

I will say that the casual hatred is something that I’ve opened my eyes to a lot in the past few years.  Again, when you live where I live, it’s not just casual, it’s the norm.

It will surprise a lot of people that my Catholic school (all twelve years) upbringing was quite liberal.  A few of us hashed it out one day when Facebook was rather young, wondering how we got the education we received.  But regardless, I can tell you with utmost certainty that I was never taught by my teachers or parents or my church to hate or condemn or judge.  I could write a whole article on this education and the whys of then and what’s changed now, but trust me that there’s a reason I don’t go to church anymore.

I found out last year, during Bernie Sanders’ campaign how homophobic a part of my family is. Like, scary homophobic.  Like the kind who says “what happened at that nightclub was awful and we don’t condone such things” but who then turn right around and pray for God to wipe the earth of the gays.   I saw a lot on social media from them that began to alarm me and at one point, my brother went off on a tirade, tagging my 22 year old daughter for being a Bernie supporter.  It was ugly, it was uneducated, and it was full of good old fashioned Christian (Catholic) damnation.

By the way, you should be very wary of trying to use the Bible as a reason for your homophobia around me.  I will take you down with your own verses.

Yeah, we didn’t see that part of the family for a while.  And even a year later, I’m still weary and on guard around them.

Turns out I had every right to be on guard.

At Easter, my dad asked my 14 year old if he was trying to be transgender.  He said it in that joking-but-not-joking voice that everyone has.  He asked my kid that because my kid dyed his hair a red, which had faded to a pretty sunset orange by Easter.  At the time, I wondered if my dad was just throwing around the latest buzzword and being obnoxious and yes, we talked with our kid about it and gave him ways to respond should he ever be in that situation again.

Then, my dad was around my 10 year old, who was going to dye his hair purple for the summer.  (Side note, it’s hair, right?  No biggie.)  Again in that joking-not-joking voice, he asked my 10 year old if he was a queer.

And THAT.  That is how casual hatred works.  My 10 year old didn’t know what the word meant, but after I explained it and we talked, he may understand the word, but he will ALWAYS have the negative connotation associated with it.

There’s more, in regards to my family’s homophobia, but it’s not necessary to share.  My dad did give a very good apology to both boys, to their faces, looking them in the eyes and it was as sincere as I imagine it could be.  Am I keeping my kids from them permanently?  Not right now.  I’m guarded, and I watch and pay attention.

It’s about hearts, not parts.

I struggle so much with not being able to understand this hatred.  And how to teach my kids how to avoid that slippery slope wherein casual hatred can spiral into horrific ugliness.

And to know that any of my kids could tell me that they are gay, and that no matter how much I love them and don’t give a shit who they love, to know that they would be a target of such hatred that could end their lives.

So…just think about that, okay?  It’s actually not that hard to be a decent person, who loves people as they are.  We are all human, we all bleed red, and we all have hearts that love and break.   And those people who died at that nightclub last year were no different than you and me.  We have to do better at not teaching hate.  And I think we can.  No, I know we can.

(By the way, this is my pen name and is not associated with anything in my “real” life, if you were wondering how I get away with some of the things I write about.)