La Violencia at the Bouncy Castle

Posted by Michelle Mullet of Suburban Misfit Mom on September 9, 2016 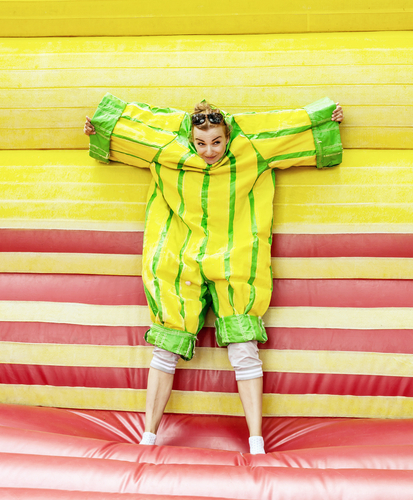 If you live in New England and have little ones under the age of 7, then you get to know indoor playgrounds as the weather can make outdoor play dates prohibitive. So, you find your favorite bouncy place and let the wild ones run around like hyper hamsters in a hyper colored extravaganza of soft, safe chutes and ladders.  The local indoor bouncy castle place has a lot of pros and cons, well, more like ex-cons on some days. It opened up about two years ago and started out happy, fresh and clean. The smell of new vinyl and hum of hard-working, industrial fans and electric generators welcomed new visitors with a sense of place, along with a maddening soundtrack of wacky kid’s songs like “I like to Move It, Move it” and “Hot Dog Dance.”

So, fast forward to Summer 2016. Fifty adults got into a full on rumble inside the partitioned “party zone,” and police responded to break up the fight. I can imagine the juxtaposition of joyful, helium filled princess balloons watching overhead as hair gets pulled, hot pink, acrylic nails flying around like hard-shelled beetles and dumpy husbands land lazy punches onto their flabby enemies. Images of the big battle from Anchorman blast through my brain, somebody’s baby momma holding a goddamn trident and another angry adult swinging a makeshift mace made out of rainbow colored balls. They bounce around the festive space like a violent scene bubbling to life inside a psychedelic snow globe.

I read the article about the big fight between relatives online and immediately shook my head in a “tsk tsk” sorta way until I realized I could’ve been in a fight just as easily a few weeks prior to this birthday disaster.  The last time I was at the bouncy place, which I will call Inflatable Planet, my two year old son was climbing a steep, soft slide when a little girl (maybe 3-4 years old) started scratching and hitting my kid. I watched for a second while the other mom just let them fight and then quickly grabbed my son out of the imbroglio. Although she was standing right next to the fighting toddlers, she just stood there and let her kid beat up my kid. I was on the other side of the room so it took me a few seconds to get over there. Once I got there, I had to grab the little girl’s arm to let go of my son and that’s when her mom started to freak out. She got in my face and yelled, “Aye, Mommy! You need to watch your kids! He started it first, you weren’t even watching your kids. You need to ask somebody before you just start grabbing kids!”

Hmm, well I just looked at her, totally confused. Um, so am I just supposed to let your kid scratch my kids face until they decide it’s over?! It was a very ugly and ridiculous moment, compounded by the fact that there were at least 60 kids screaming and running buck wild all around us, with a nice, ear-piercing quacking soundtrack to complete the scene. All I could do was shake my head and tell her, “What the fuck?! What’s wrong with you?” And I walked away to get a refund and tell the manager about the potentially violent parent. She followed me and tried to intimidate me and tell the staff that I was the real problem, but I’d been there so many times that the staff just shrugged and gave me my money back plus some free passes for future visits. Because, yeah, even though there are fights here, I’ll be back. Except, now I wear headphones and listen to books while the kids freak out. So I can see all evil, but I don’t have to hear it.