Marching for Yourself: Quiet Revolutions

Posted by Taylor Williams-Durant of Suburban Misfit Mom on January 24, 2017 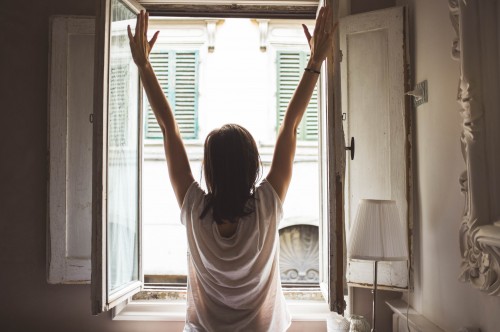 This past week, I avoided watching the inauguration, and instead, had lunch with a girlfriend. Then I continued to avoid watching it by running errands and drinking iced coffee in the sunshine while I worked. I suspect if I’d started watching all the coverage, I would have started drinking alcohol instead, so avoiding that kind of hiccup at 10 am on a workday is a win. Part of me feels ignorant for skipping it, and I grappled with some guilt as the hours ticked by. But part of me feels smart. I decided to use the power of the Internet and say to myself, I’ll watch it when I’m good and ready. When I feel like it. And I decided that was OK.

My political indulgence for the week was watching women march all over the place the following day. I put on a shirt adorned with a uterus that said, “tell me I’m beautiful,” and wore it all over town. I’ve never been so obsessed with Instagram as I was watching the pictures of strength and beauty unfold as the marches did, receiving texts from my friends and sister, who attended the DC march. My heart swelled with pride. That sort of wild goodness and hope, I was ready for.

I’m not going to flood you with more political commentary or even thoughts on His Orange Majesty. I’m going to talk about choice. I’m going to talk about why we, as women, should say “when I’m good and ready, when I feel like it” a heck of a lot more often. One of our greatest powers – not weaknesses – as women is that we feel. We feel and we emote and we sense and we empathize and we intuit. Glennon Doyle Melton posted on her Instagram feed recently, “You are not a mess; you are a feeling person in a messy world.” Damn straight, Glenny Love. Gosh, I love that. And our World (big World, capital W, the whole World) can be a royal mess, but equally so can be our worlds (small w, more personal world.) We get our panties in a bunch over politics and women’s right and racial hatred, because we should. We fight for what we think is right, we ask or demand what we need, we cry, we march, we donate, we grieve, we celebrate. This is healthy and worldly. But where do things drop off when we consider, more intimately, and more closely, ourselves? Our own private worlds (little w, not less small, just more personal, worlds.) Do we advocate as hard? Are we as thoughtful? Do we put our feet down and say what we want and need? Do we celebrate our bodies in the private space of our own bedrooms, when no one is watching and applauding on social media? Are we #bodypositive when it’s just us?

To fight for ourselves, our day-to-day lives, and the love of our Selves is important – critical – work. There is so much to celebrate in our recent raised consciousness as women and as a nation around womanhood and racial disparity, diversity, and even motherhood. It’s been a growing, loud, raucous revolution, one we should be proud of. I think the big, national, broadly-sweeping social outcries are made more powerful when we have quiet revolutions of our own, too. When we allow time and space and resources for self care. When a girlfriend says, “Wow, you look great,” and instead of thinking of a thousand negations, we say thank you. When we sit down to rest after the work is done. Like, really rest. When we mess up and forgive ourselves or say I’m sorry. When we look in the mirror, dressed in our Period Pants, sans make up avec greasy hair and whisper, you are beautiful and I love you.

Quiet revolutions. In your world: in your one, wild, precious life (thanks, Mary Oliver. P.S. you and Glennon should hang out.)

So back to saying no and you’re not ready and you’ll do whatever it is when you are good and ready. As a comedic improviser, I’m big on “yes.” As a creative, intuitive type, I’m big on “yes.” And as a woman I’m big on “yes.” To a fault. “Yes” is good and committal and open and all good things about risk. But sometimes “no” is equally as open and brave when we need to allow ourselves rest and space. The Yes can take over in the form of over-commitment and martyrdom, when we’re not carefully aware of how we’re expending our emotions and energy. I think many times we know we shouldn’t go to that one more social outing or say yes to another project or keep going on dates with that guy or gal who we’re not really all that in to – or keep watching the news when we feel emotionally flooded and the moment becomes too much to bear.

It’s OK to stop. Stop. Slow down and breathe, take your space.

Why do we say Yes in pain and push on? Maybe because we feel bad or we’re afraid of judgment or rejection ourselves. That’s where No, or not yet, or when I’m ready can be an ally. Precisely how it can be, too, in the political and social sphere when we don’t agree with something and we stand up for it. We can and should stand up for ourselves that way.

Do you ever notice that it’s frequently easier to support a girlfriend in this way than it is yourself? You’re out for coffee and she’s bashing her body; you reassure her. She’s stuck in a relationship she feels is causing more pain than good; you give her permission to let go. She’s beating herself up about what she didn’t do as a friend, a mother, a daughter; you tell her she’s doing great. And they’re not just empty words. You mean them, you think of her later and reassure her again, you give her ongoing support. Do that for yourself. Literally try putting a hand over your heart when you’re overcome with “not enough” or “I’m not this” or “I’m too much of that,” and say, “I’m enough.” And listen. Listen to if Yes is right or No might be better this time.

Whether it’s a nap you need to take instead of going out, or the time has come for you to take control of your health, or there’s a relationship you need to tend to, be kind. Quietly revolt to yourself, and mean it. Rock on, all you smart, sexy women.