Posted by Lisa Clark of Suburban Misfit Mom on April 4, 2016 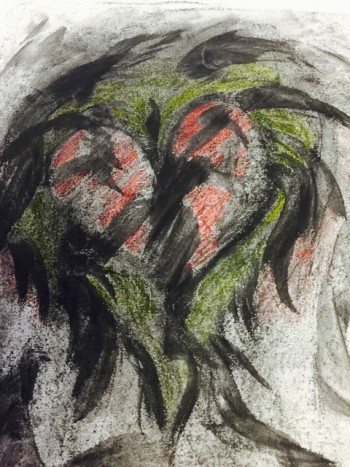 Nights at my house were as normal as could be whilst dealing with an alcoholic parent. Mom and Pops worked full time and Mom usually walked through the door around six. I dreaded those moments she would drive up. I was always so anxious because it was always the guessing game. Would she be drunk or sober tonight? I always prayed for her to be sober but, unfortunately the outcome wasn’t what I had prayed for. Drunk or not as soon as she got home she went straight to the kitchen to prepare dinner and she always whipped up something spectacular. It was hot and on the table by the time Dad arrived home.

We would always sit down together for dinner. As we all know this ritual has become not so typical in today’s modern household-for some but we did it back then and I try my best to do it with my family now. Being the oldest child in the house I had the fun task of kitchen duty after dinner. I hated doing dishes with a passion. But, then again I think most teenagers had issues doing anything other than being in their room doing a whole lot of nothing.

So, when it was time for me to get in the kitchen I acted out my plan to get out of it quick. I pouted, I sighed loudly, I muttered bad words-under my breath of course and I banged the dishes around until Dad ordered me and my bad attitude out of the kitchen! It was a fail proof plan. It worked every time. My sisters said I was spoiled. Ha! Well, I guess I was a bit spoiled but that didn’t come without a price.

Upon release of my kitchen duties I would retreat to my room. No way did I want to stay in the company of Dad washing dishes and muttering bad words-under his breath. Once in my room I would listen to music, write, draw or move my bedroom furniture around. I wasn’t a diary kind of girl so when I say I wrote, I mean I would pull out a dictionary, pick out a word, write it and it’s definition about ten different ways. My musical taste was very much the 80’s. Michael Jackson, Andy Gibbs and whatever else was playing on the radio. Michael Jackson was my absolute favorite back then. He was plastered all over my bedroom walls.

Mom, usually retreated to her bedroom. She would iron her clothes for the next day, tweeze her brows or read her ‘True Crime’ murder magazines. Who remembers these magazines? When she was gone and I was home alone, I would sneak into her room and read them. This is probably why I have many issues being home alone even to this day. Every noise freaks me out. Ha! Anyways, she was also most likely in her room sipping on her vodka from a coffee cup if she wasn’t already drunk. It wasn’t unusual for me to be woken up by the sound of arguing parents.

So, I would lay in my bed, propped up against my wall underneath my window, for what seemed like hours. According to my clock radio it wasn’t that long and it was usually around midnight when I would hear my door knob turning. It was Mom again. She was coming in to give me a kiss goodnight. I don’t know why I did it but I would lay there pretending to be asleep. I didn’t want her to know I was awake. It was very hard to lay there so quietly when deep down inside I was crying and hurt. But, I learned to pretend like a pro even when she flipped on the light.

Mom liked to collect antique dolls. These dolls had the most beautiful faces and wore hoop skirts and pretty bonnets. She would adorn every inch of my dresser and nightstands with them. I’m sorry but I hated those damn dolls. They scared the crap out of me and I always felt their prying eyes just staring at me during the night. So, every night before I jumped into bed I turned them around so their eyes were staring at the wall and not me! Mom absolutely hated it when I did that It was always an argument but she kept buying them and kept putting them in my room. I was not a doll kind of girl at all! Someone would give me a doll and I would throw it in the closet.

She always let out a little laugh after mentioning the dolls. Then she would look at me for a few minutes more. Then she would lean over and kiss my forehead and say, “goodnight Nena, I love you.” So much of me wishes I would have opened my eyes and told her I love you back. I wish I would have got up to hug her. I feel I didn’t tell her enough how much I loved her and I definitely did not hug her as much as I should have. I often wonder if letting her know how much I loved her, would have helped her? Probably not but, I think about it a lot.

But, I was angry. I was angry at her for not being that person she was at midnight. I needed her and wanted her to be that person every day. Mom never kept her word. She never kept her promises. God knows, she tried the best she could but she just couldn’t do it. This was the last time she ever came into my room at midnight. Things in our home got progressively worse and many life changing events came into place…

(artwork brilliantly provided and painted by the writer herself, Lisa Clark.)