Posted by Sheila Qualls of Suburban Misfit Mom on May 27, 2016 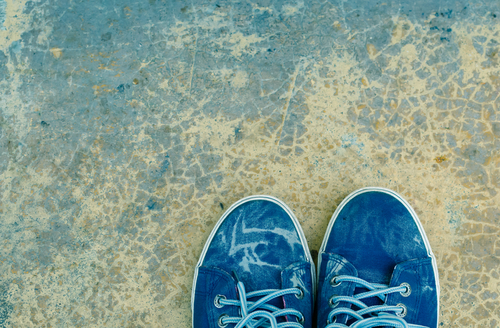 “Never do for your kids, what they can do for themselves,” said some wise parent somewhere.

I emailed my daughter’s teacher about her paper because she’d pilfered points from her essay citing a comma shortage. The teacher thought my daughter had left out commas where she should’ve put them. Now, as far as my daughter’s papers go–eloquent? Maybe not. But grammatically correct? Absolutely. Even so, emailing her teacher was a mistake. I broke the number one rule for raising an independent kid.

I’d stopped my daughter as she walked through the kitchen on her way to her room and asked what she got on her paper.

“Pfft! Commas?” I said incredulously. I checked her paper for grammatical errors before she’d turned it in. (Satisfies my inner grammarian.)

“Well, she said I left them out where I should’ve put them in.” De-commafied sentences? I couldn’t believe it.

“Give me that paper.”

I’m kind of a Comma Nazi. As an English major and former journalist, I’ve taught my kids the importance of properly punctuated sentences. They might not get it right 100 percent of the time, but 17 points worth of commas? I don’t think so. I might not know a thing about Algebra or Chemistry, but I know a little something about commas.

I wouldn’t have argued about content, but “misuse of a comma?” For that, I was willing to go to the mat. I couldn’t find errors in her paper, but her teacher had inserted commas where I didn’t think they belonged and took off points.

“Hon, I don’t see a problem here. Maybe I’m mistaken, but from what I understand about commas, there’s no issue.” The English Teacher’s Society of the World (or somebody like that) has been known to mess with  grammar rules, switching rules around when people aren’t looking, but they couldn’t have changed that much.

Then I made my first mistake. I broke the number one rule in raising independent children. Rule 1a. I grabbed a grammar textbook to check comma rules. Grabbing the textbook isn’t the rule I’m talking about. I did something for her that she should’ve done for herself. Rule 1b (an extension of 1a). Next, I cross-checked on the Internet to make sure somebody hadn’t sneaked some new rules in behind my back.

Second mistake. Rule 2: I butt in when I shouldn’t have. I emailed her teacher.

“Look,” I explained to my daughter as I pecked out the email, “I’m sure your teacher’s really smart, but I think she’s wrong here. Don’t just accept what someone gives you without question. Don’t you want the grade you deserve? You need to learn to advocate for yourself.”

Then I advocated for her.

I diplomatically started the email by thanking her teacher because teachers work really hard. And, in my opinion, are overworked, underrated, and underpaid. And, under appreciated. I didn’t want to foster a spirit of disrespect for authority in my daughter.

I then politely went in for the kill. I explained that we had a difference of opinion about commas, but  acknowledged I could be wrong. I asked her to take another look at the paper, and if she agreed to re-instate my girl’s pilfered  points.

About 15 minutes later, the teacher emailed back. She apologized. She’d made a mistake. She restored the points and raised my daughter’s grade to a 95. The Comma Crusade was over. I’d won.

Yeah, as Grammar Girl, I was victorious.  As a mom trying to raise an independent kid, not so much. If I could rewind, I’d do it differently.

“I’m a Comma Queen” isn’t the point of this story; the point is I shouldn’t be doing stuff for my kid that she can do for herself. My daughter’s 16. At her age, she’s capable of approaching her teacher to work out a problem. It was her 83, not mine. I should’ve let her cross-check the rules then coached her through working the problem out with her teacher. How else is she going to learn?

I’m trying to teach her to be an adult. Too many times, I advocate for her when I ought to stay out of it.

Lots of parents make this mistake. They’re called helicopter parents. And, I was in hover mode. Helicopter parents fight with their kids’ teachers, coaches, and tutors. They wage war when they think their kid’s been mistreated. If only it stopped at teachers and coaches. They show up on college campuses trying to direct everything from their kid’s class schedule to the roommate they’re assigned. They show up in the workplace. They approach their adult kid’s employer to express grievances on behalf of their kids. They ask for raises or complain about the workload.  How are kids supposed to learn how deal with conflict if we constantly hover over them ready to dive in and fight their battles? As adults, we may be more savvy or more adept at handling stuff, but in order to develop independent kids, we’ve got to let them get in the ring and fight and get knocked down a few times.

Luckily, I had an opportunity to redeem myself a few days later. My daughter’d been complaining TO ME that a mom she babysits for paid her with checks, but she wanted cash. We don’t have a local bank, so she’s got nowhere to cash a check. Checks do not translate to cash in a teenager’s mind. This time I stayed out of it.

“If you want to be paid in cash, ask her to pay you in cash,” I said causally.

The next time she watched the kids, she came home with cash.

“I asked her to,” she said smiling and flashed the bills in front of my face. Working out the problem gave her experience in advocating for herself. It certainly boosted her confidence.

Obviously, when my kids were younger, I needed to advocate on their behalf. It was my job. But it’s also my job to teach them how to advocate for themselves. The sooner they start, the better they’ll be at it. And, until they’re out on their own, I’m right there to offer assistance, if they need it.

“Glad to see you advocated for yourself. It might not always turn out the way you’d like, but you’ll never know unless you ask,” I said.

“Yep,” she said with a grin and traipsed upstairs to chunk the cash into her bank while I landed my chopper and hung up my blades.