Posted by Julie Lachtay of Suburban Misfit Mom on August 10, 2016 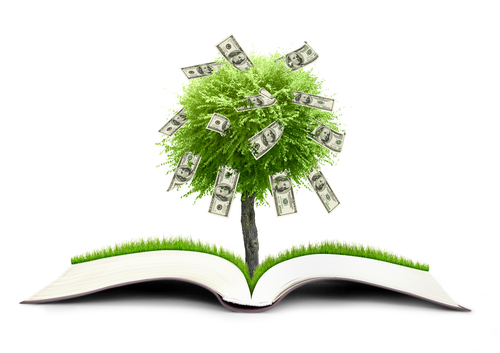 Money AND Magic. Exciting huh? Have you ever noticed how some people NEVER worry about money (or anything else?). They might work less than you, they might not be as good at their job as you but money just seems to flow to them.

Whereas no matter how hard you work, cut back, scrimp and save YOU STILL seem to be living paycheck to paycheck?!

That was me. Then, I finally started to understand the Law of Attraction and how the universe works. I finally totally accepted that my thoughts and words create and shape my reality.

You don’t believe this, do you? Well, it took me a while. Want to know what sealed it for me as real? It wasn’t that I had an amazing, perfect, abundant life. I struggled with depression for years. I’ve been homeless. I’ve gone days at a time without eating.

Ironically, once I started to read up on how your thoughts create your reality, I started to see a pattern. I realized that for years and years I’d listened to my inner voice – the mean one – that told me “You’re not clever enough to have a good job and earn money.” “You’re not pretty enough, thin enough; confident enough”. I told myself and others “Oh, I never have any money”; “I’m really unlucky. Anything that can possibly go wrong in my life does.”

Now to be clear, this wasn’t my imagination. It was true. All of it! What I suddenly realized was that it was true because I believed it. I lived it. If you keep telling yourself these things and believe them, you get them. I decided I’d had ENOUGH.

I’d been living like this for twenty odd years and I was burnt out and exhausted. I figured I had nothing to lose by changing my thoughts and beliefs. I started daily affirmations (“I am strong and confident”, “I can do ANYTHING I want.”  I am blessed”). I started a gratitude journal- which then became a wall!. You know what? Magic started to happen in my life. I suddenly started meeting the sort of women I’d always wanted to be friends with. Kind, selfless, supportive, successful, inspirational women who wanted to be friends with ME.

I created a vision board and started to practice manifesting. Do you know what that is? It’s super cool. It’s magic. It’s magic that everyone of us can do! In simple terms, you decide you want something, you write it down, put pictures of it on your vision board. You imagine how it would feel to have it- and BOOM! It magically appears into your life.

So that was all my money problems sorted in a heartbeat! I practiced gratitude, I practiced being abundant, I became the Queen of Manifesting and lived happily ever after. Obviously? Well, NO- it didn’t play out like that.

I want to do a course that costs £3000 and I have £30. Easy- just say I want it and a 24 hour flash sale appears in my inbox telling me the course has been slashed to £30? This has happened three times.

Need extra cash to pay my rent? Think it? No, still no money. Write it down under a full moon. No, still no money. Feng Shui my flat, build a money attraction corner, carry the correct colour purse, fill it with abundance hearts and fake million pound notes, meditate, do EFT. NO, still NO money. In fact for the first time in my life I got up one day to pay my rent and I just didn’t have it. I had precisely £10.

Ok. So I figured I must have some kind of deep-rooted money block that I just couldn’t fix. I spent a day researching Kinesiologists and decided that was the way forward. Small problem. It costs a lot of money. Well, £100 might not be a lot to you but when you’re plagued with money blocks and struggling to live on £100 a week- that may as well be £1000000. My birthday was approaching. I emailed friends and asked if they would consider making a £5 donation to my appointment instead of buying me a gift. I have great friends so of course they did.

That night I went to a Theta Healing Meditation and Sound Bath. It was amazing. This is like some kind of magic where your blocks/ problems can be removed in one session. I waited to speak to the organiser who pointed me in the direction of a man-wearing a t-shirt with Angel wings on – and said “Go speak to……he’s brilliant with money blocks.

I approached the man wearing a t-shirt with Angel wings on. He took one look at me and declared “Your blocks are ancestral and you have a deep-rooted fear that if you make money somebody will take it from you!”

I laughed. I hadn’t thought of this in years but I had in fact been told my whole life that my Father came from a very wealthy family (He was named after the King of Poland who was his godfather!) who lost all their money during the war.

This wonderful man said he would give me a session at a very reduced cost. Of course the figure he quoted was exactly what my friends had sent. The universe is always supporting you. There are NO coincidences. I was super excited.

FINALLY things would be sorted out and I could move on with my life. I waited for him to call. Yes ‘him. I have just about NEVER forgotten anybody’s name in my life but I drew a blank. I was certain He would get in touch.

A week went by, two weeks went by. Into the third week people were telling me he was a fraud/ it wasn’t meant to be. I didn’t entertain that. I knew I would find him. I’m the Queen of Manifesting after all.

I attended a workshop for people who fear public speaking (turns out I don’t have a fear but that’s another topic for another post) where I met a lovely lady who was a Theta Healer. She sent me a friend request. We spoke. I told her about the Angel Man. “Oh, you mean Sat.” she said. A name!!! I stalked my way through her friends list and there ‘he’ was. The amazing, magical Satvinder Sing Sagoo. I sent him a message and he responded within days. He had lost my business card. His session cost exactly the amount my gorgeous friends had gifted me for my birthday. (Thank You Universe!).

We booked an hour long session for a few days later. OMG. This is some spooky weird magic. At one point he asked how I damaged my spine when I was younger. When I was 21 I slipped a disc and trapped my sciatic nerve. I didn’t walk for a YEAR. How could he know this?!! We had an amazing session. I woke up feeling lighter – physically. Two days later I had an email telling me I’d won a competition. I’ve NEVER won anything before. The next day I got an email from Suburban Sally herself saying she would love me to write for you all. A dream come true!

I was genuinely shocked to find I didn’t win £60.000 in a competition and that I didn’t get a single matching number on my lottery ticket but I KNOW something has changed and I don’t need to worry about money or fear not having it any more.

It doesn’t matter what you’re struggling with. Sat can help you. You can contact him here:https://www.facebook.com/divinesacredsoul/?fref=ts

Choose Love, believe the universe has your back, ask for help when you need it. You can create the life you want. I’ll keep you posted. The clearest sign I have that things are changing? The ‘job’ I get paid for ends in a little over a month. On the surface this means I will have NO income. I am not the least bit concerned by this. That’s over a month away.

Would you like to know more about how you can identify your blocks, unpick the beliefs you have that are holding you back? Would you like to move from feeling unfulfilled, alone, burnt out and stressed to calm, happy, and creating the life you dream of?

Connect with me and let’s unleash your joy: http://www.yourdreamlifeawaits.com/

Love. Light and Happiness (Choose them and they’re yours)