Posted by Ailish Delaney of Suburban Misfit Mom on April 15, 2017 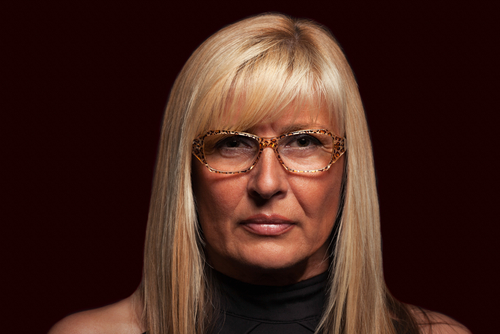 My Mum is disappointed. In me. She’s disappointed in me. If you have ever been on the receiving end of anyone’s disappointment then you will know…it sucks! It’s a million times worse than anger, or the silent treatment. Give me a screaming argument any day – let’s get it all out in the open, cards on the table, and deal with it. That’s the healthy way to do it.

She’s never said it, of course, she doesn’t need to. My Mum is Irish, and therefore has a face for every occasion. Her disappointed face is one where she simultaneously takes a deep breath, while managing somehow to pull all her facial features in, rather like when you were a kid and you would stick your thumb into the middle of your doll’s face just to distort it, and then wait for it to pop back out with a satisfying snap. No? Just me then. (Can I just say that I never played with fire, wet the bed or pulled wings off insects – I possess no traits of a psychopath.)

Take the airport situation. I am the youngest of three children – my sister is 8 years older than me, and my brother (hereon in known as Golden Boy) is 4 years older. My sister had been home for a few weeks on holiday from Oz, and we were at the airport with her to see her off.

As luck would have it (I am being sarcastic here as my Mum is a social phobic) an ex-work colleague of my Mum’s saw us and ‘coo-eed’ her way over. She stood talking to my Mum for a minute while I stood with my little ones, and my sister was getting her boarding pass.

This was the conversation:

Friend: “It’s been ages, how are you?

Friend, looking at me and smiling: “Is this your daughter?”

Mum, looking at me: “Yes, yes, she’s my youngest” (dismissively) “but THERE’s my oldest daughter, over there. She’s over here on business you know.” (Big smile and much pulling on friend’s sleeve in my sister’s direction). Have you ever heard an Irish woman putting on a posh voice? It’s hilarious.

WTF??? My sister wasn’t on business! She was home for a few weeks’ holiday, no business whatsoever. Great. As they sashayed off to meet my jet-setting sister, I was left watching the cases and children, the frumpy mum-child.

Then there was the time that I got ill. Long story short, I had a rare and severe reaction to the flu jab which literally left my spine in tatters – facet joint arthritis, spinal stenosis and neuropathy in my leg, and degenerative disc disease. Most times it is manageable, but occasionally it gets bad enough to warrant crutches, a stick, or even a wheelchair (although I was far too stubborn to use it, it just sat there taunting me). Most of the time I throw codeine down my throat and hope for the best.

So, it was the first time my Mum had seen me when I was having a flare up. The coach stop is a short walk from the house, so I grabbed my cane (which, I will have you know, is blinged to the hilt – diamante, sequins, and Betty Boop) and set off to meet her from the coach. After about ten minutes of me talking to her, I realised she was waaaay behind me. I stopped and waited for her and asked her if she was ok, why was she walking slowly?

“Because I wouldn’t be seen dead walking beside you while you’re using that thing.”

Riiiiiiggghhhhtttt. Thanks for that Mum. That hurt more than my damn spine!

Sometimes, my Mum even engineers situations just so she can be disappointed, which I guess is a good thing – I clearly don’t disappoint her enough just by being me. I hadn’t heard from her for a few days, so I called her to see if she was ok. She wasn’t. She had fallen over and hurt her knee. A week ago. A full week had passed, and she hadn’t called me, just so she could then tell me I didn’t care enough about her to know she had fallen! She actually said that she had been sitting there, getting more and more angry that I didn’t care. How the feck (as she says) was I supposed to even know??? She deliberately didn’t call me, just so she could be disappointed that I was such a bad daughter. I should insert here that Golden Boy lives a five-minute drive from her house, I live over an hour away – was she disappointed in him? Was she hell, but he hadn’t called her either.

Divorce. To the old school Irish, this is a word which can only be uttered in lowered tones. It carries the same furtiveness (and shame) as ‘pregnant’ and (makes the sign of the cross) ‘sex’. In fact, the word ‘sex’ is rarely said, it’s spelled out, and punctuated with full stops between each letter.  ‘S.E.X’. What we call full stops, most of you will call periods, and that’s another word that can’t be spoken. Periods. They are called ‘The Others’, and even that is whispered.

“Are you coming swimming today?”

My mum and my aunt nearly had apoplexy when I taught my little cousin the words to ‘Like a Virgin’. I can only imagine what the nuns thought when little Lisa taught her friends the lyrics back in Dublin!

At a family gathering, a distant relative asked me about my family, was I married etc. I opened my mouth to reply that I was, actually, divorced, when my Mum, who has Bat-Like hearing specially reserved for potentially embarrassing situations, swooped in and answered for me.

All of this while I stood with my mouth hanging open.

They must have thought I was the simple one of the family, no wonder she’s disappointed.

But I have had my moments of glory.

Mum has always wanted my sister and I to have short hair (I’m sure a psychologist would have a field day with that) and one day, when she was visiting, she persuaded (for that read nagged) me into getting my long hair cut. It ended up as a short pixie cut which was nice, but I hadn’t actually wanted it cut. She loved it, however, and when she went home, she carried a photo of Alyssa Milano with cropped hair in her wallet, and when anyone asked about me she would whip out this photo and show them! Most of them didn’t know who Alyssa Milano was, and she never corrected them, she just let them think that was me. This is her. This isn’t me. 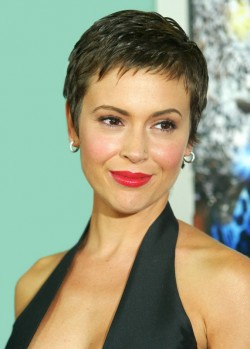 So what did I do? I got very bored very quickly and gave my son free rein with the clippers and he gave me a buzz cut! It was awesome. My mum thought I had come out of the closet.

Childish? Definitely. Worth it? Absobloodylutely!