Posted by Michael Badger of Suburban Misfit Mom on December 20, 2016 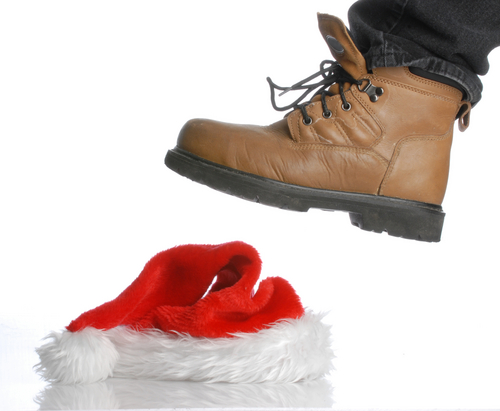 Something I’ve discovered is that even during Christmas time the internet is a dark, vacuous place full of cruelty and ugliness. And now it’s about to get even uglier because this is literally a list of things that are making me angry today. Irrationally so.

George Lucas: George Lucas is worth 4.5 billion dollars and looks like he cuts his own hair with left handed school scissors. Also he has a barely-there chin, (I also suffer from this) which means he should not be clipping his beard along his jawline because it only emphasizes his chubby elfin features and neck-chin. His wife, assistant, mistress, publicist–one of these people should clue him in.

Johnny Depp: Johnny Depp wears too many goddamn bracelets. I mean, if you’re gonna wear a scarf, hat, sunglasses, necklaces and rings… Calm down with the bracelets. It’s too much. You look unhinged. Johnny, brother, please try cutting back to about 11 accessories. And maybe lose the British accent. Seriously, a British accent sounds pretentious coming from actual Brits. It sounds absolutely ridiculous coming from an American who lives in the U.K. half the year.

Sean Hannity: Sean Hannity’s hair is almost as terrible and fucked up as his demented body snatcher of a soul. What are you doing with your life, Sean? Part your hair on the side or part in down the middle or comb it back with no part at all. Your part is in no man’s land. It makes no fucking sense! Figure it out man because you’re failing at life. In more ways than one.

Rude People: People who don’t say thank you when you hold the door open for them. Who raised you? You’re a bad person if you do this! Did you think it was an automatic door and I’m just standing there smiling because I have nothing better to do? Don’t do that. Don’t breeze past a person who took a moment from their day to be kind. For fucks sake we’re trying to have a society here!

Basement Dwellers: People who walk around in public with snakes, ferrets and lizards. Why the hell do you do that? Attention? I guarantee you the only people interested in your non-pet pets are 8-years-old and under. The rest of us are wondering how bad it must smell in your parent’s basement and when the last time you washed your “wolf howling at the moon” t-shirt was. Parrots are okay, I guess.

Time Thieves: Anybody who has business at the post office that isn’t me. Oh you want to sign up for a new PO box when there’s only one clerk working? That’s cool. I just want to quickly mail this package but yes, I can wait. Oh all five of you need a passport for your trip to Europe? Absolutely you should discuss your trip with the chatty clerk. It’s really no problem, I only need to mail this one little package, so I can wait.

These phrases bother the ever loving fuck out of me:

Roundabouts: There are two kinds of People in this world–people who know how to use a roundabout and people who don’t know how to use a roundabout. Oh my god this bothers me! Dear sweet father in heaven, I cannot understand these people. If someone is at the roundabout already–you fucking wait your turn! If someone is in the roundabout changing lanes–you wait your fucking turn. It’s not rocket science–it’s really not science at all. It’s just common sense.

Celebrities: Celebrities with clothing lines. No! Stop it! No! I’m sick to death of seeing a celeb try to design something. There are of course a few exceptions but on the whole it’s just… it’s offensive. And obnoxious to be perfectly honest.

HGTV: Hey HGTV, I’m paying for this! I don’t want to see 12 straight hours of Property Brothers on the guide. It makes me crazy pissed! You replay the same shows over and over. I’m seriously vexed and confused by your programming. I recently got cable TV because of how much I loved HGTV in the mid 2000’s. Now you have a show about people buying islands. Actual fucking islands! What the fuck are you doing? No one wants to watch someone buy their own island. It’s not 1982, HGTV, and you ain’t Robin Leach. You are annoying in the most annoying possible way. I’m done with you.

Parking Lot Murderers: People who speed in parking lots… Why do you do it? You have to know that children jump out from behind cars right? They just appear out of nowhere. That’s what they do. Kids are dumb. It happens every day. Calm the fuck down and drive slower in parking lots.

Chronic Speeders: Dear people who speed everywhere you go, you’re going to eventually kill someone, dummy. Stop speeding. It’s really stupid. Eventually the speed will catch up with you and you will kill someone. Speeding is also really hard on your vehicle. Yes, even an expensive car designed to go fast. The suspension, linkage, steering, motor mounts, bushings… it’s hard on all those components. Slow down for the sake of others and your vehicle. Mostly for others because I actually don’t give a fuck about your vehicle. That’s called artificial concern. It lets you think I actually care about something that affects you personally. It’s a writer’s trick to get you to see my point of view. But if you speed everywhere endangering people, you’re a douche-nozzle and I could give two shits about your vehicle falling apart.

Gwyneth Paltrow: I once knew a young woman who said she couldn’t understand people who live paycheck to paycheck. She just didn’t get how someone with a job could be broke. She said all of this while living in a condo owned by her grandparents which she lived in for free. Not only did she not pay rent, she didn’t pay any utilities, insurance or taxes. Yet she felt perfectly fit to disparage those living paycheck to paycheck. I call that the Gwyneth Paltrow effect. Like Gwyneth, this young woman speaks down to people from her ivory tower and then has the audacity to ask, “Why do people dislike me?” Well, as with Ms. Paltrow, I don’t dislike you. I just don’t respect or admire you in any way, shape or form.

Stupid Parents: Parents who give their children twenty dollars from the Tooth Fairy. What the hell is wrong with you? If you want to give your child $20, great, but don’t say it’s from the goddamn tooth fairy. Kids talk! My child asked the other day why her friend gets $20 a tooth while she only receives $1 per tooth. How do I explain that?! I’ll tell you how. I’ll tell my daughter the tooth fairy doesn’t exist. Then she tells your child, thereby fully ruining your tooth fairy experience. Of course I wouldn’t do that, but it’s basically the same thing you’re doing to parents who have agreed to the social contract of giving one to five dollars for a tooth. Or keep doing whatever you want. Who cares. You certainly don’t.

Watermarks: You took a great snap of Half Dome, congratulations so have about 9 billion other people. In fact it is almost impossible to take a bad photograph of Half Dome. So now you take your picture and slap your stupid watermark across the image and put it on Facebook. You know what… Edward S. Curtis you ain’t, okay? Get out of here with your stupid copyright. Now your picture isn’t worth viewing! Keep it. If you share it on Facebook I will comment with an eggplant and pee drops and a poop emoji.

Christmas: Hear me out before you label me a Santa hating-pagan-heretic. Christmas is stressful; besides the religious aspect it mostly exists to pad the bottom line of corporations. I love Christmas–but I hate all the crap that goes along with it. Now what if… no seriously! What if… Christmas was like the Olympics–every 4-years? Or every other year? I mean, we could still celebrate the incorrect date of the birth of Christ and all that. But all the Santa stuff… let’s skip it every once in awhile. Well… just think about it okay? Promise me you’ll at least think about it?

I have no explanation for why I hate these people, places or things but here is a list in no particular order.