My First Piece of Hate Mail

Posted by Melissa Jacobowitz of Suburban Misfit Mom on June 6, 2016 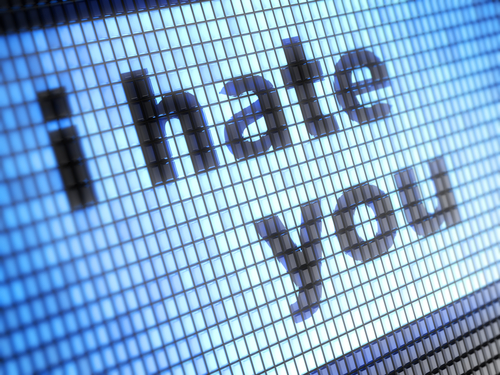 About 6 months ago I noticed a post in a local mother’s group about writing for “Suburban Misfit Mom.”  I grew up in New York City, but I now live in the northern suburbs of New York City with my husband and two children – so even just the title of the blog resonated with me. I decided to explore the opportunity. I had an awesome Facetime conversation with the curator and was well on my way.    To date, I’ve had about 14 articles published and received loads of support and positive feedback from friends and family, friends of friends – some even pretty ironic connections.  I’ve had a few people that I had no connection with at all reach out to me as well.  In general I’ve only received positive words about my stories.   My confidence was rising – maybe I CAN do this.

But then it happened.   My first piece of “hate mail.”   Seriously, I thought I only had fans!  Well, I guess the term hate mail is a little much – but that’s how it felt.   Suburban Misfit Mom published an article I had written about children needing a mental health day now and then.  Ironically, the curator thought it was “not extensively polarizing” and I thought the same.  It was published on a Monday morning.  Throughout the day friends and family commented, as well as shared the article.  All the support always makes me giddy and proud.  My practice is to go through all of the posts to thank people for the share and to respond to comments.  Then I saw this:

Whoa.  What the….?  This was a comment on the share from an old friend from childhood.  It was his friend who commented.   Dude, I gave my 2nd grader a day off from school!  I hardly changed the outcome of the world here.

I felt steam coming out of my head.  Do not let it get to you, Melissa.  Relax.  Breathe. You put yourself out there.  You knew this could happen one day.  Sure, folks are allowed to disagree with me, but even after reading this a few times, I just could not see anything constructive.  Was he trying to prove a point or shut me down personally? Because it definitely felt like the latter. And by the way hater boy – I didn’t contradict myself in the initial article.  My children are not overscheduled.  (And I would not use the word overprogrammed because my children aren’t computers.)   I am not judging other families and to each his own, but surely there are some that are overscheduled families.  Those are the ones that I was referring to when I mention the weekends not being restful.

Anyway, I deemed a response necessary.  After all, I am a girl from the Bronx.  Okay hater boy.  You may not agree with me – but questioning my parenting and the long term effect on my child?  Um, no.  My response is as follows:

Maybe not the most mature thing I’ve ever done, but when you feel attacked, you defend.  It’s human nature.  It’s survival nature.  That said, I decided that I wouldn’t go back to see if/when hater boy responded.  When he did, my friend relayed the message.  Hater boy apologized for making it a personal attack, but still stood by his opinion on the issue.  I can accept that.  I’m not sure if the hater knew that my friend knew the author of the article.  Maybe if he did, he wouldn’t have commented as rudely? Maybe.

I turned to my fellow writers for advice and feedback.  What an incredible, funny, insightful and supportive group of people!  Some of their thoughts:

Now my favorite really was – He needs to calm down and eat a Snickers or something before he has a stroke, but a couple of writer colleagues also stated:

All great points to think about.  I love the idea of getting people thinking and conversing, but I still was not convinced that this was hater boy’s motive.  My friend had the wisest words of the day: “Not only are you putting your writing on the judgement block, but a huge part of yourself.  At the same time, you have to stand up for yourself and I think you did that in a very appropriate fashion.”  You can question an idea or a story.  But to question a writer’s life, values, morals and journey is another.  That is where I felt the need to stand up for myself.

Many told me to screw the haters.  Oh, I should –  but that is easier said than done at this early stage of my writing gig.  Maybe my 9th grade teacher did scar me?  I admit to having lots to learn when it comes to the emotional part of feedback on my writing, but what good does shaming a writer do?   I don’t get it.  Disagree with me – fine.  But to bash me personally and question my parenting?

There is a fine line between criticizing a writer’s ideas or story and criticizing a writer.  That’s where I think my hater crossed the line.  What did he want to accomplish?  Again, his words were more personal, so it begs the question ‘why’?  Yes, I put myself out there – which can result in critics and disagreements.  But when you write a personal essay it’s almost a work of art, in that it should not be judged objectively.  You may not like the story, but shutting down a voice –  especially a woman’s voice, a mother’s voice –  is quite dangerous in the long run and could be a slippery slope. I do wonder if hater boy would have responded the same if I was a man, but that’s a conversation for another time.

There are probably countless others that were shut down by their hater boys.  Hater boy’s words could have resulted in quieting my voice.  My voice that has helped women suffering from maternal mental illness.  My voice that praised my son’s teacher as one of the biggest influences in our lives.  My voice that has brought laughter and smiles to my readers.  I’m a survivor, so I may have to keep on defending.

So I’m going to keep on with my writing – and with my so-called contemporary parenting.

The way I see the score, it’s: