Posted by Melissa Jacobowitz of Suburban Misfit Mom on August 24, 2016 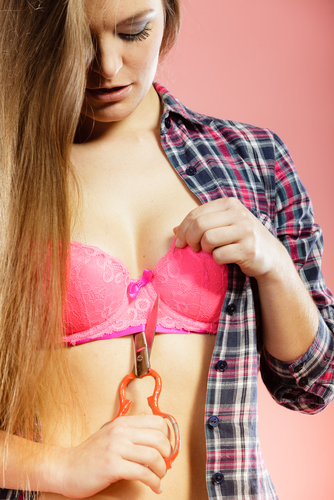 I talk and write about my children often, so just by the title of this article you might be thinking “here she goes again!” Well, my friends, titles can be deceiving!  Us writers have a few tricks up their sleeves – or in their shirts. Ha-ha!

You see, one of my fellow writers wrote a fun article a few weeks ago called “The Booby Trap.” https://suburbanmisfitmom.com/the-booby-trap/ (Credit to the hilarious Ailish Delaney and I received her permission.)  As I read through, the one major theme that came out of it for me was how much I could NOT relate!   I figured I’d take on the flip-side and to talk about “The Un-booby Trap.”

So, as you figured out by now, I must not have much going on in the boob department. I’m not flat-chested – but they’re on the small side.  They fit me well though.  And I have always been completely fine with that.  I’ve definitely been envious of others beautifully flowing hair, flat stomach or perfect figure….but could care less that my boobs never reached their true potential.

Ailish’s article gave me the idea to chat about why little ones are fantastic too:

There a couple of points which Ailish references to which I’m extremely happy that I don’t have to worry about:

I also read that smaller boobs have less of a chance of developing breast cancer.  And that PMS is a doozy on big breasted woman too.  I don’t know if these statements are scientifically true, but if so, I’m happy to be a member of the club.

When I was pregnant plenty of people said “Just you wait! Your boobs will get SO big!” Now again, I didn’t care about being big chested, but I was curious as to what I’d look like. Patiently I waited and waited throughout both of my pregnancies and shortly after, when supposedly all the milk comes in.  Nada. My children are 11 and 8 and I think I’m still waiting for the pregnancy boobs to come in.

Unfortunately, I don’t reap in the supposed benefits either.  No sexy cleavage. Never scored free drinks by wearing a low cut shirt, although my eyes and genuine smile work plenty.  I don’t get ogled when walking down the street (wait, this isn’t really a benefit, is it??)   And the most interesting thing about my boobs is probably the biopsy scar.

Obviously, everyone has their preferences – it’s all opinion and there is no right or wrong. There was a meme recently on Instagram that said I wish I had “I don’t need a bra” boobs. I swear I didn’t write it.  I don’t know who did – but finally – there’s someone out there, somewhere in the world, who is jealous of something I have!

Or actually what I “don’t” have.