My Time In A Sensory Deprivation Tank: I Was Plugged Into The Matrix

Posted by Renea Dijab of Suburban Misfit Mom on August 30, 2016 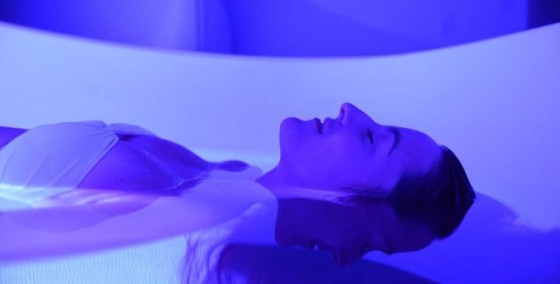 My personal motto is “I am afraid of everything, which is why nothing has killed me yet.” I’m afraid of, among other things, water, the dark, and small spaces, so when I saw a Groupon for a sixty-minute float in a sensory deprivation tank, naturally, I snapped it right up.

With trepidation, I made the appointment. Before going in, I checked out the Float Annapolis website and read all about it to make sure that I was as prepared as possible and to, hopefully, prevent any last minute freak-outs.

My appointment time was the first one of the day at 10 a.m. I followed instructions, ate a light breakfast, and avoided caffeine.  I was greeted, led back to my private room, and given instructions as follows: hang your clothes on the hooks provided, shower, get in the tank (naked), when you hear the music your time is up. Enjoy!

The most valuable piece of advice I received was the suggestion that it might be more comfortable to float with my arms over my head rather than at my sides, as I imagined I would do. I tried it both ways, and let me tell you, just in case you do it and they forget to share this with you; over-the-head is an infinitely preferable position.

They also provide ear plugs to keep the water out of your ears and Vaseline to coat any scratches or sores that would be irritated by the salt water. (More on that in a minute.)

The steel float chamber resembles a rectangular bank vault the size and shape of a commercial shipping container.  Before stepping in, I opened the door wide enough to completely see the interior to make sure there were no homicidal clowns lurking in the corner. I stepped in and sat down in the 12 inches of warm water fortified with a thousand pounds of Epsom salts.

The water is body temperature, around 95 degrees, which means you lose your sense of touch. When your skin is touching nothing but water the same temperature, you eventually lose the ability to recognize where your body ends and the water begins. It is surreal to lose the ability to sense anything by touch.  Of course, all you have to do is swish your arms and you can feel the movement of the water. If you lift up a hand, you can recognize the difference in the air temperature.

The only moment of discomfort I had was that at times I felt a little too warm. I blame that on being a “lady-of-a-certain-age.” All I had to do was lift a few body parts out of the water and the cooler ambient air relieved the hot flashes and I proceeded to get my float back on.

So, I floated for 60 minutes in an 8’ by 7’ chamber with no light or sound. I tried to stay awake but kept drifting in and out of consciousness. I think. I had a hard time telling the difference between wakefulness and sleep. It was like being hooked into The Matrix. Maybe our perception of reality is all a dream and we are all just really floating in giant saltwater tanks?

At one point, I hallucinated the chiming of a grandfather clock. Or maybe that was a dream. I also had a great idea for a story I am trying to write.  I thought about water snakes and sharks before I let the anxiety go. I made sure that I knew where the exit door was and could open it at will. I tried it a couple of times to be super sure.

I think I was asleep when my exit music started playing. At first, I wasn’t sure I heard it. I was hoping that I didn’t, but realized that eventually, the fire department would have to bust the door down, so I sat up and took an earplug out to listen. Damn it. It was time to get out.

Based on my prior research, I had been extra careful to follow the suggestions for avoiding water in my eyes.  I had been successful until I stood up, and one drop rolled down from my hairline and into my left eye. That tiny drop of highly salinated water burned with the fire of a thousand Hells. I thought I was going to have to pluck my eyeball out.

So, back to the idea that one might put Vaseline on a scratch and get in that water, I would highly recommend that you don’t do that. If you scrape your knee the day before your appointment, for the love of all that is holy, reschedule.

I did not achieve the out-of-body experience that I had hoped for. I thought I might see God, or have pre-birth memories of the womb, but instead, I dozed in and out and thought I heard a clock chime.

I will do it again. It was wonderfully relaxing, but the next time, I will drink a barrel of caffeine before I go because I want to stay awake, damn it! How can I achieve inner peace when I am asleep?