Posted by Nathalie Laitmon of Suburban Misfit Mom on April 9, 2015 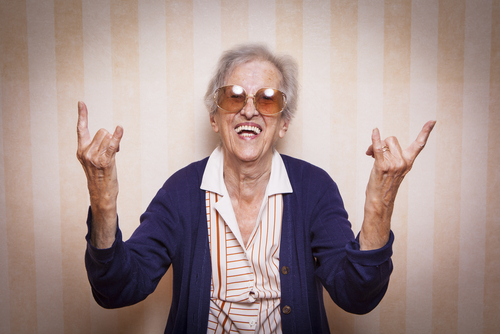 After Reading, “Centenarians Spill The 4 Secrets To A Long And Happy Life,” I am convinced now, more than ever, that Old People are the Holy Grail To Life’s Big Questions.

Old people have both fascinated and terrified me since I was a little kid.  I grew up in an apartment building in an outer borough of Manhattan.  It’s the last stop on the subway, and also on the train of life, my quaint home town where most anyone I bump into can reference a grandparent of theirs that lived or currently lives there.

When I was in my youth, old people seemed to store some mysterious knowledge, and they looked at me with a frightening glare that said, “you hold this door open or by god, ye ten year old bitch, I shall unveil the horrors of life from which my scraggly face has been winched into this expression since the day I came upon said knowledge.”  Every brush with an old person was either biblical or shockingly pleasant (such as Carol, who, god bless her soul, smelled like roses and looked like a Precious Angel statue until the day she passed away in 3B.)

Therefore, I have some unfinished business with old people.  I’ve been chasing them ever since.  My pursuit of Old People has only been hampered by my move to the suburbs – the woods – because now I have to scout them out at dog runs, or at the diner when I’m with the kids, or at UPS.

Before, Old People were everywhere.  They made my single life in the city impossible, because I could not stagger into my elevator drunk at 5 am without getting nasty looks from them and their designer pets.  And yet, now that I’ve had my own kids, old people seem to be hiding from me.  BUT THIS IS WHEN I NEED THE ANSWERS THE MOST, YOU OLD PEOPLE.  I do not live in Walnut Creek, and therefore do not have an idyllic multigenerational family where granny raised me alongside ma.  In fact, most of my friends moved where their husband’s work dictated, having nothing to do with their families of origin.  Most of my kids’  friends do not have their grandparents living right nearby.  And so, our kids are being robbed of old people at an age where they would have shockingly awesome effects on the development of our youth.  First, old people know what matters and what doesn’t.  Second, old people love kids no matter how difficult they are (caveat: as long as they’re related to them.)  Third, old people are running out of time so they tell it like it is, and don’t bother with the fluff of therapists.  Lastly, old people are out to prove one thing:  they were right (or for those “enlightened” old people: they were wrong, dead wrong) the WHOLE TIME.  That’s eighty to a hundred years of “I said so.”  What does one parent, of seemingly weak morale, exhausted manner, confused disposition, have over the power of one really old person who might scare the crap out of a kid, but still, that’s like a million “I told so’s” wrapped into one musty bundle of unconditional love and acceptance.  Old People, we need you. Stop moving to Florida.