On These Fall Mornings

Posted by Taylor Williams-Durant of Suburban Misfit Mom on November 21, 2016 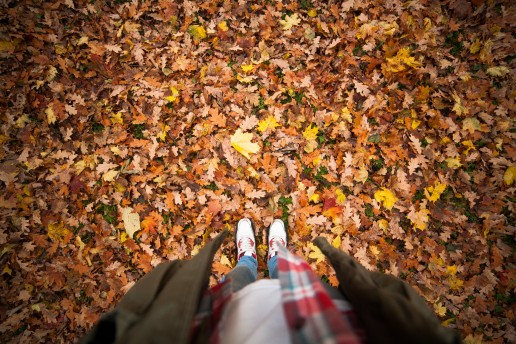 On these fall mornings, when I am out walking very early,
I feel like I’m keeping the morning’s secret.
The only sounds are the birds and the acorns
falling through the tree leaves and the occasional
fuzzy sound of a lonely car in the distance.
I feel like I’ve got the upper hand on the day,
and that everyone still sleeping in their houses or watching TV this early or having trouble waking up and sucking back their coffee with a frown on their face is missing out!
And I have this special access to the day
creating itself,
while I get to walk around in it like a dream.
The fog is hanging like it wants to imitate the Spanish moss,
and it’s inviting me to the next street
where the traffic lights are changing for no cars.
The lights shine like carnival lights after everyone has left,
and there is an eerie but beautiful shadow or whisper
of the aura they are sending out like a signal close to their bodies,
like a sign of something they are directing that is long gone.
And then I realize that that’s what my thoughts can be like on these walks:
glimmers of something real but not reality, exactly,
yet they are directing me and some sort of way,
like those ghosts of traffic lights.
As I walk, I notice a newspaper in each person’s driveway-
the local press, the New York Times, USA today –
it’s like they says good morning to me more than the neighbor who will eventually read it.
For each one,
I wonder if I should throw the paper deep up into their driveway, in a neighborly way.
But I imagine, since they have not yet come out of their house,
perhaps I could do them a favor by leaving it be,
and letting them come out into this foggy chilly invitation of the morning on their own time
and get it for themselves.

And their newspaper will say to them, like these walks always say to me,