Posted by Jill Wexler of Suburban Misfit Mom on May 4, 2017 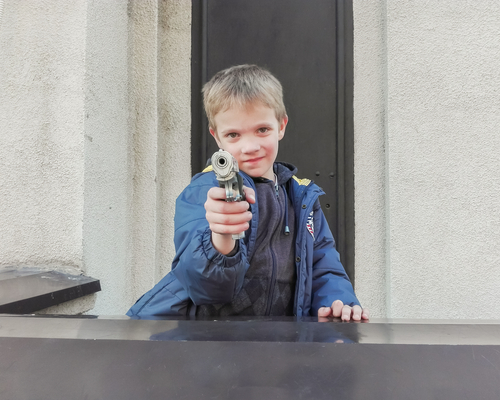 There are three guarantees in the parenting world.

Look, I had Spawn #1 and Spawn #2 eight years apart, so in some ways, they were both first kids.  I get it, I remember how carefully we guarded them from playing more mature video games, from reading “The Hunger Games” too early, from being around unsavory influences like kids who seemed to have no parents whatsoever.  I remember how we taught the first child about poor language and cussing and in fact, I have a clear memory of banning the word “frickin’” because let’s face it, “frickin’” is basically the baby F-bomb.  I vaguely remember a household where we didn’t use the word “stupid” and “sucks.”

Spawn #3 says “sucks.”  Often, as a matter of fact.  And he played first-person shooter games at least 2 years before I’d let his brother (Spawn #2) do so.  And we’re reading “The Hunger Games” right now and yeah, he’s 10.  Judge away.

Spawn #3 made a new friend this year in 4th grade and it honestly took until April before I was able to get a phone number for the mom and actually get around to texting her and then actually setting up the playdate slash sleepover.

The mom said we should meet at the local eatery so we could get to know each other and then the kid could just go home with me.  And about an hour before said meeting, my stomach began knotting up.

As far as I knew, the New Friend was the oldest child.

Spawn #3’s previous school friend (aside from the kids in the immediate neighborhood) was also an oldest child and with fairly religious-based parents.  I only bring up their Christianity because That Mom did often, as if Jesus helped ward off the potential danger my kid could bring to their household.  I liked That Mom a lot, actually, but what I’m saying is that this was the type of family that probably didn’t yell “that sucks” if their kids were in a 5 mile radius because good parents don’t do that.

I remember being nervous and this exchange happening:

Me: So Spawn #3 has been told to watch his language.  I mean, he doesn’t cuss but I’m sure he says some words, like “stupid” or something that your kids probably don’t.  I’m apologizing ahead of time and I hope you don’t hold it against him.  Overall, he’s a good kid but I have two teenagers in the house and well, it’s hard to curb everyone’s language all the time.

Me in my head: Yeah, I’m sure my kid does cuss behind my back because I think the other two do too and I can’t monitor 24/7 and honestly, if he knows to how to avoid cussing in front of adults, isn’t that a win?  But I can’t prove that he cusses or not so hey, just giving you a heads up in case you’re the kind of parent who stands behind the door and listens to everything the kids say throughout the entire playdate.

That Mom:  Oh it’s fine.  It’s just fine.  No, we don’t say “stupid” and Friend knows that sometimes other families do things differently than us.

Me:  Great, well, thanks so much and I hope he behaves himself.

That Mom:  I’m sure it will be wonderful.  And if something pops up, no worries.  We use things like that as teachable moments during bedtime prayers.

Me in my head: Fucking great.  Glad to be of help.  Maybe you’ll luck out and have lots of teachable moments tonight! And maybe during bedtime prayers you should talk to God about judging other people.

So I get it.  I really do.  Which is why I try to explain up front where Spawn #3 is in the child lineup and hope that the parent gets it.  I don’t think I did until Spawn #3 came along.  Seriously, what do you mean “it’s hard to keep things from the younger kids’ ears and you can’t always just watch G-rated movies because of the youngest child.”  Of course you can, you terrible mom, you.

Yeah, been there, done that, got the judgy teeshirt that remarkably was Spawn #3 himself.

So I was a bit nervous about meeting this new parent of his newest friend.  I mean, I’m fairly confident that Spawn #3 is indeed a great kid, because the first two were trial and error, right?  I mean, we got a few things right this time around and I think we might be producing the best model yet.  But still.

We got there and the New Friend’s Mom was great and turns out the New Friend’s Mom has a younger brother who’s only a couple years older than her son so New Friend is also exposed to more than an oldest child might normally be.  We compared video game rules and so forth and I think…I think, it’s going to be okay.

She certainly didn’t mention using Spawn #3 as a teachable moment.  Nor did I bring it up.