Politics Can Learn a Thing or Two from Little League

Posted by Melissa Jacobowitz of Suburban Misfit Mom on August 28, 2017 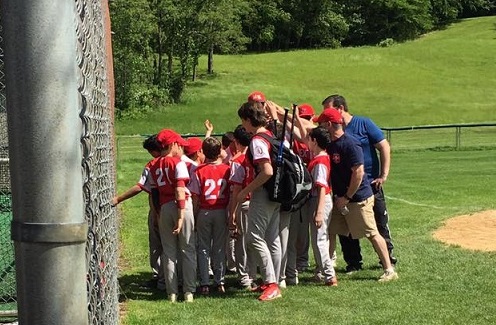 My son’s little league career ended this spring….it’s quite alright….no big drama. He simply aged out of the program and doesn’t have the skill or desire to continue on to more competitive teams… It was a wonderful experience for all of us – my husband and I as spectators; my daughter as a supposed cheerleader (with her favorite cheer being “I don’t want to be here! Rah! Rah!”)…and of course, my son as participant.

It’s easy to see the positives in becoming involved in team sports.  Besides the obvious benefits of learning the skills of the game, performing physical activity and exercise, and building endurance, the translation into “real life” skills is amazingly evident.

My son, while trying his hardest, was never a top player.  But his takeaways from playing in this league will last a lifetime.

Getting back to this past season though – there were 6 teams in the league.  His team was pretty strong this year – they came in 2nd place and received a bye in a double elimination playoffs….and then promptly lost two games in a row to be eliminated.

Through the playoffs, the teams that lost kept cheering on the remaining teams still playing. It wasn’t easy.  They wished it were them – but these kids kept rooting for each other.  Team after team was eliminated until there were 2 teams left.  And when there are two teams left, the end result is one winner and one loser.  The losing team crossed the lines to congratulate the winner. The winning team showed respect for all the teams that they had to beat to win the championship. The next day, the kids went back to being friends – and we can certainly credit this from the social skills they learned from the league during the years.

One winner, one loser.   I find it challenging not to make a leap to politics here.  These boys and girls – all of 9 to 12 years old – have showed more maturity in a Little League scenario that the folks leading our country.  Is it possible that our politicians need to take lessons the boys and girls learn in Little League?  You win some, you lose some – it doesn’t mean you take it out on the other team!   I don’t care what side you are on.

Right off the bat (see what I did there?), my thoughts here have very little to do with the winner and loser of the Presidential election, as the infighting and “taking sides” is hardly a new situation.  I’m expressing the need to join together, scratch the whole “sides” thing and walk across the aisle with true intention (not for “yourself”, Mr/Mrs Politician, but for the country, ok?)   We need to see more from the politicians that just being “anti” the other side?   Such little hint of sportsmanship, it’s unreal and somewhat embarrassing.  Why there are “sides” in helping society and humanity in the first place is beyond me, but whatevs, as the cool kids say….

Now, we all have strengths and weaknesses, just as children on a little league team.  Can we use these skills to negotiate and strategize, instead of blatantly dismissing an idea merely because it came from the other team?  Be civil – you don’t need to like one another, but simply be nice. Camaraderie between teams goes a long way.

Of course there is continued parallel at the Major League Baseball level.  First off, 25 guys from different walks of life getting together to accomplish on a common goal.  (Synergy folks!!!)   Second, the competition throughout the season…..eliminating each other from contention….until it comes down to 2 teams.   Akin to the Presidential election process? There are 2 major parties representing the people in America.  Each party has their slate of candidates that eventually gets narrowed down to the two that will run against each other for “the win.”

Think about the send-offs for players like David Ortiz and Derek Jeter when they retired.  Kudos from teams across the league! The entire league gave them the respect they deserve – even though they might have been on the “other side of the aisle.” Why?  Because they earned it.  I don’t know – Maybe if our political parties had an All-Star Game, inter-league play or team mascots, they’d laugh and lighten up a bit?  Or theme events, like Bobblehead night and Garden Gnome nights?

Joking aside and back to the kids. At the end of each season, the Little League holds a BBQ. Honoring the winning teams, MVPs and coaches. The league also says goodbye to the kids who age out, including my son this year, with a shout-out and a plaque.  Bittersweet for sure, but it’s a celebration.  These kids walk away with skills they can apply to real life situations they may encounter in years to come – to do their best, understand disappointment, be a gracious winner, support one another and work towards a common goal. The best part of it all was watching them come together as a true team and a true league.  The community should be proud!

If young boys and girls can be mature enough to support each other and promote togetherness, can we wish the same for politicians? If you really want to  Keep America Great, you don’t have to look much further than America’s Favorite Pastime. There are many lessons that can be learned and applied – if you just come together and do the work.   Currently what the public sees is a group of men and women consistently at each other’s throats  – with their major goal of seeming to be to discredit the other team.  If our little league boys and girls behaved like this, they would have been benched a long time ago.

Do it for the game – whether it be baseball, government or the country.  Join forces – even a little! – and we’ll all be better off.  Respect works both ways.  Let’s play on a level field. Maybe when you guys/gals start acting like you truly care about the people (ALL the people) in this country, we’ll respond back with kindness and cooperation and be proud of you too.

**Ironically, I had already been working on this story when I woke up on June 14th to hear about the shooting at the congressional baseball practice….By no means am I condoning the actions of this shooter and feel thankful for the first responders and that all injured survived, but it’ll be interesting to see if it’s the situation actually does bring the two sides closer together to do the job that we the people elected them to do.  Work together.  We have more similarities than we do differences.  After all – it’s in the name of the country – United States of America.  All you have to do refer to the above “Little League Life Skills” for some ideas.