Six Stages of Exercise with a Toddler

Posted by Jessie Ford of Suburban Misfit Mom on January 11, 2017 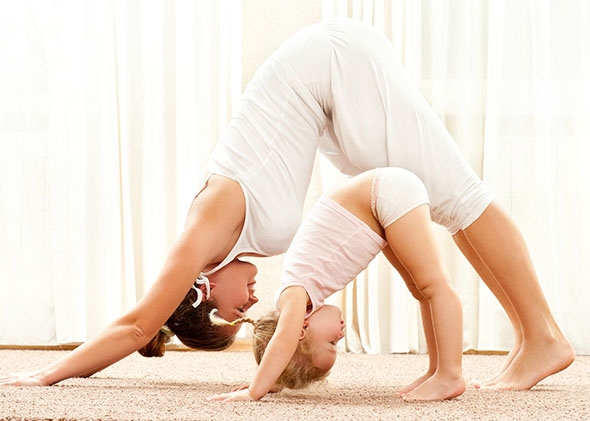 Acceptance. You turn on the TV to start searching for that evil Jillian Michael’s workout and your toddler’s eyes light up! He runs to the couch with all three of his blankies, sits down as close as he can to you, and his smile lights up the whole world. He is so excited to watch TV with you!

Enthusiasm. The jumping jacks start and he jumps off the couch jumping alongside in the most adorable toddler attempted jumping jack you’ve ever seen. He is loving it and you have this feeling that you can get this entire 20 minute workout down with no problem. You jump, he jumps, you all jump together. Yay!

Ambition. These four pound weights are easy peasy. He tries to pick them up with the cutest groans and sighs ever. You quickly take them away before he breaks a toe then he runs and gets two LEGO pieces to use instead. Watching him lift the LEGO bits over his head is seriously the most adorable thing ever. Why did you ever doubt this toddler would be hell on wheels? You keep pushing through the workout envisioning the two of you running side by side over the finish line of a 5K race in a few years. Bestie workout buds!

Silly Time. The push up stage works for the first 2 or 3 and while you’re trying your best to keep your form, it becomes increasingly difficult as your toddler starts throwing himself across your back in a fit of giggles. Clearly jumping on top of mom while attempting pushups is the funniest shit ever. You laugh the first time, you tell him in a silly manner to stop the second time. By the third time you’re laying on your belly exasperated wondering if this 20 minutes will ever end while he lays across your back kicking his legs, flailing his arms, and laughing hysterically.

Reflection. You’re almost halfway into your workout and little man has had enough. He wants you to pick him up which you can’t do while doing squat and lift as Jillian yells at you through the TV, “You want a full workout in only 20 minutes, no resting!” Meanwhile, the girls on the TV bare-bellied accompanying her in their totally flawless manner attract your older daughter. “Mommy, why don’t they have bellies?” to which you answer, “They have to look like that to help people look like that. If I went into fitness as a career, I’d look like that too,” as your eyes look them over in longingness wondering where the hell you went wrong to end up like this rather than like them. You get kicked back into the present as the toddler starts pulling at you fiercely now to pick him up. Yup, nothing like a clingy toddler to bring you back to the present reminding you why you look like this. Yes, you eat your feelings every time said toddler throws a toy in the toilet!

Completion. Ab time arrives and you lay on the floor now wishing the workout was done, wondering if you can just turn it off and call it a day. You tried but your child didn’t cooperate. He is now in full blown crying mode and comes over to lay on top of you while you’re doing abs. After a few futile attempts, you just squeeze him back and sit up. He’s squeezing your sweating body not caring about the soft rolls and just wants you. Grateful for the extra cushioning around your bones protecting you from hard elbow jabs and knee kicks, he wiggles around until he’s comfortable.

As far as you’re concerned, half a workout and snuggles are just as good as a full workout. So there’s that. It’s a win, win!