So Your Kid’s Going To College

Posted by Katherine Egan of Suburban Misfit Mom on May 3, 2016 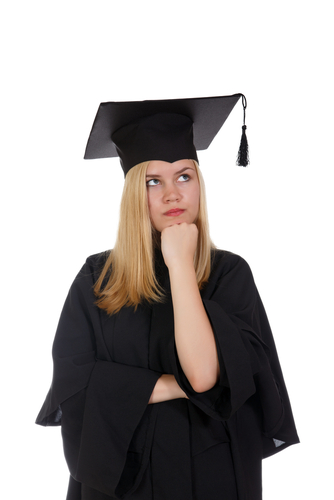 It’s that time of year again… As spring gets warmer and we head into summer – kids across the nation are hearing from colleges and universities about whether or not they were accepted. Some heard much earlier; some are still waiting.

As a university administrator for the past 30 years, this is not something I’ve paid close attention to. Working in the IT department affords me minimal contact with students. I just don’t interact with them on a regular basis. So I never really paid much attention to the goings on around campus, other than what I needed to focus on for my job.  Sure, I see the tours trudging all over the roads and walkways. And I have to sometimes push my way through the crowds in my building just to get to the ladies room. But I never stopped to listen to what they were saying. I never took a tour of my own campus. The place I’ve spent a good portion of the past 30 years.

You see, my step-daughter (SD) was accepted into her number one choice of college. We heard back in December as she did early decision. But it’s becoming more and more real as we get closer and closer. Especially as she just spent the weekend there. Yup… The Open House Program for Admitted Students.

OMG!! Our baby is going away to college. Gah!

Well, technically, she was never my ‘baby.’ I met her when she was eleven. Or was it twelve. And she didn’t live with us full time. And she’s not going that far away. But still – our baby is going away! Life will NEVER be the same again.

So, admitted student’s weekend… She was hosted by some sophomores in their dorm room/suite for two nights and participated in numerous activities, such as tours of the local neighborhood, a double-decker bus tour of NYC, dinners with alumna, talent shows, observing an actual class, and lots of interaction with current students.  And she absolutely LOVED it. She told us she felt as if she was home. That she never wanted to leave.

So exciting! For her. And a little terrifying for us.

My husband and I went to visit her while she was there. As part of the program, parents get to visit and see what life on campus will be like for their kid.  Her mom had a conflict, but went the following day, so it was just the three of us. Of course we got there early, so we had plenty of time to hang out with SD before the official activities began.

She met us just outside the gate, gave us both hugs and proceeded to tell us about everything that she had experienced since she got there the day before. As we walked through the gates and entered the grounds, it struck us that she was so comfortable it was like she was walking us into her home. Wow!

She gave us a brief tour, all the while chattering with complete exhilaration. She showed us the building where she’ll be living in September, walked us around a few of the closer buildings and ended up in the gift shop. Of course, I had to purchase a few items – including a teddy bear and sweatshirt for SD. I love that I was able to do this for her. That she had no qualms about handing me the items to pay for. That her dad stayed outside and left us alone. And that at 18 she still wants a teddy bear 😉

Then we took a tour of the campus led by a current sophomore who was truly impressive. She’s a double major and had so much energy it was inspiring. She also had a ton of knowledge about the school, its history, the various buildings and where departments were housed, its academic programs, and just about anything we asked her. She spoke non-stop for an hour!

Of course we paid very close attention. Especially when she was talking about where the kids live and where health services is in relation to where the kids live. According to her, it’s really convenient to have health services housed in the freshman dorms because that first time you’re sick and away from home can be extremely distressing. My poor husband looked so sad. Whenever any one of us is sick, or even feels the tiniest inkling of getting sick, he immediately cooks up a huge pot of chicken soup. It’s truly amazing; extremely delicious with a nice kick of spice and it heals anything! I can just imagine him running a pot of soup down to her in her dorm room. Instead of an eight minute drive, it’ll be 35-40 minutes. And he’ll have to cook enough for all her roommates.  But he’ll do it if I know him!

After that we headed into an auditorium to hear the Dean of Enrollment and the President speak. The Dean went first. She started by rattling off the diverse qualities of the class of 2020, including that they come from 48 states and some number of foreign countries I can’t remember as well as every ethnic, religious, and gender orientation out there. She talked about how many were musicians and how many were athletes and how well rounded some of them were. What she said next though, really impressed me. She said not all of you are well rounded. I looked at my husband and wondered; who is she talking to and where is she going with this? Doesn’t every kid strive to be well-rounded? Then she continued. We’re not looking for every student to be well rounded. We’re looking at the class as a whole. We want the class of 2020 to be well rounded. Your class. I really liked this!

She then read snippets of their admissions essay where they had to answer a question about why this particular college would be a good fit for them, what qualities makes them uniquely qualified for this particular school; then she listed their responses to the question about the one woman they’d want to have dinner with. The best part was when she read snippets from the kids’ letters of recommendation. This is something they never get to hear!

The President of the college got up next and spoke about the transformation these kids will go through, almost organically. She called it the ‘secret sauce.’ She couldn’t describe how it happens or what actually occurs, only that at the end – our daughter will stand up straight and walk through life with such confidence that she’ll be a force to be reckoned with. She will speak without hesitation about her dreams and goals and what’s next in her life, without one um or uh. She will go far no matter what life has in store. She will be successful in everything she puts her hands on and her mind towards. The President was talking about every student who goes through four years at her college, though it seemed she was speaking directly to us. I’m sure every single person in that auditorium felt the same.

I looked over at my husband and I think I saw tears. I could just imagine what was going through his brain. Imagining his little girl four years down the road, ready to graduate from college. All grown up, standing straight and tall with poise and confidence and excitement for what she was becoming.

So… TERRIFYING! Yup. She’ll be leaving home in a few short months. Her mom will have a more difficult time as she’ll be missing a permanent roommate. She’ll have that empty bedroom and lots of quiet. I hope she knows we’re here for her. If she needs some company, a distraction, glass of wine… But it will be different for all of us. We won’t be right around the corner. Dad will have to drive a little further when she’s craving his food. We won’t see her 1 or 2 or 3 nights a week. We may not see her for months!

And yet – it is so breathtaking to see her energy and feel her excitement about what lies ahead. It’s a beautiful sight to behold.