Posted by Ailish Delaney of Suburban Misfit Mom on September 19, 2016 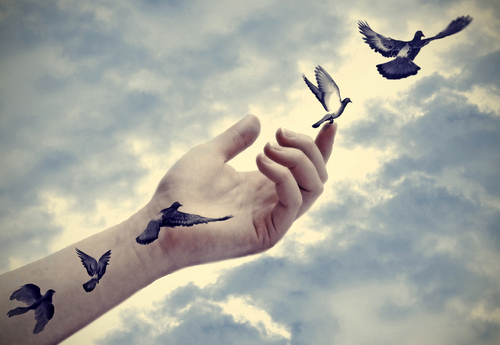 When my three children and I arrived at a women’s refuge, scared, skint and emotionally battered, I had no idea what to expect.

A refuge is one of those places that everyone knows about, but nobody knows about, if that makes sense? It’s like the afterlife for abused families – we all hear stories about it, but rarely hear about anyone who has been there.

But that Christmas I couldn’t take any more. Things were getting more and more volatile – not only were we walking on eggshells – hell, not even eggshells, what we were walking on were fragile eggs that could crack at any moment – but we were also holding our breath so often and for so long that we were running out of oxygen.

In short, we were dying.

Christmas day had been spent with my three children and I, huddled around the kitchen table staring at the tiny screen of the portable tv, and taking it in turns to hold the broken indoor aerial in a certain position. He, on the other hand, was lying on the huge seven seater settee watching the 47 inch brand new tv. We weren’t allowed to go in there. We were consigned to the kitchen like fecking Cinderellas, wishing we were at the ball.

As Christmas turned into another new year, things got worse. I could sense the rage bubbling under the surface, and I knew he was ready to explode, and I also knew that, in order to shield the children from it, I would be in the firing line. He had almost killed me once, this time I might not be so lucky.

So I started to gather together essential paperwork, enlisting the help of a couple of trusted friends who looked after a few things which had sentimental value, and I rang women’s aid. They didn’t have a place for us straightaway as just after Christmas is their busiest time. Tis the season to be jolly…ha!

But after a few days, find us a place they did, and as soon as he left for work we ran.

I was told to drive to a certain town, and then to call them, where they would give us directions. It was all very clandestine, and added to the surrealism of the whole thing, but eventually we arrived.

We were shown to our room, and left to settle in. And you know what? We freaking loved it! We had a tiny flat, all to ourselves, with a miniscule kitchen and bathroom, and a bigger room with a pull out double sofa one end, bunk beds the other end, and a dining room in the middle, with a tv and dvd player.

Those nights in the refuge were the happiest we had known in years. That first night we watched dancing on ice, and the children played to their heart’s content, in their socks sliding around the wooden floor as if they were skating. They laughed, and they tumbled, and they…were children.

The refuge sorts out benefits payments, so we were able to go shopping, and we bought what WE wanted, and ate when WE wanted. We had floor picnics, and we ate in bed, and we were free. Nobody shouted at us for making too much noise when we ate, or for spilling a drink, or for dropping a knife on the table. The four of us cuddled up on the double bed at night and watched films, eating ice cream.

It was nothing like I had expected. I thought it would have been full of silent, angry, broken women. I was so wrong. While we were there I met the strongest, most inspirational women I have ever met. Women who had been beaten to within an inch of their lives. Women who had lost everything. And yet, in the communal lounge, after the children were in bed, they gathered together and talked, and laughed, and friendships were forged.

It was there, in the lounge of that refuge, that I began to see the strength of women, of mothers. The ability that women have to rise again and again from the ashes, the ability to smile for their children while inside they are screaming. The ability to get out of bed day after day when they have no bloody idea where their lives are going.

It was there that I realised the incredible power of the sisterhood.

Of course there were women who were so damaged that they were angry and mistrustful of everybody, but the refuge had the most incredible counsellors there, who helped those women to heal.

At night, when the children were asleep and the loneliness hits, a fairy godmother, in the guise of a night warden, would knock gently on the door to see if you were ok, and let you cry on her shoulder until you had no more tears.

I wasn’t strong enough that time. Amid hundreds of suicide threats from him, and promises of change, and counselling, I went back.

And that night he did it again.

But something inside me had changed, I was no longer going to put myself, and more importantly my children, through it.

I went to court, got a court order, and had him removed from the house.

We have never been able to stay in one place for very long, because of the constant threat of what would happen if he found us, so we have led a somewhat nomadic existence. But that feeling from the refuge has never left me, and I will never again allow any part of that old life to penetrate the life we have built for ourselves.

Where we are now is our most stable life yet. We have been here for six years – the longest we have stayed in one place. The police have turned our house into Fort Knox – alarms on every window, anti-kick bars on every door, reinforced door frames, motion sensor lighting, anti-climb paint…I still, after all this time, look over my shoulder, check the doors and windows are all locked at night, and I jump every time the phone rings.

We have changed our names completely and legally, and literally become different people. My children are now 21, 19 and 12. I have two grandsons, and life is as settled as it can be.

I would never have had the strength to do it if it hadn’t been for the time we spent in that refuge. Being there changed our lives. It made me realise that, even when life seems impossible, if we dig deeply enough, we can find the strength to come through anything. We can survive.