Taking the Fight Out of Your Fighter

Posted by Michael Badger of Suburban Misfit Mom on May 23, 2016 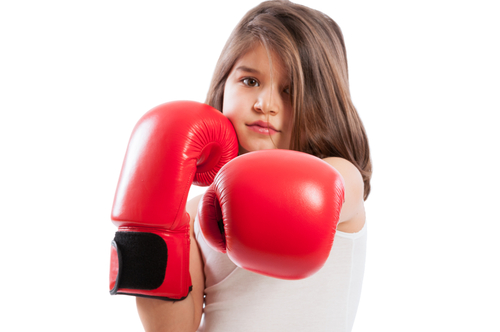 The other morning, I opened the laundry room door and found my eight-year-old daughter sitting on a stool eating her breakfast. “What are you doing in there?” I asked.

“Fiona’s up and she’s… you know, in a mood. Can you close the door?” I closed the door and left her to enjoy her peaceful breakfast.

I knew what she was talking about.  When my four-year-old Fiona wakes-up in a bad mood, she sets her sights on one person and proceeds to torment them with the ferocity of Seal Team 6.  No explanation is given. If you demand one, she will eventually blame some imagined slight from four weeks earlier. On a normal day, eight-year-old Emmy is my peaceful protester, and Fiona is firing pepper spray into the crowd. Fiona is strong-willed. She is fearless, and she will stare you down. When Shakespeare wrote, “By the pricking of my thumbs something wicked this way comes,” he was really talking about strong-willed children. Okay that’s a bit of an exaggeration, but let me give you an example of her willfulness:

Panties. Yes, panties.  She won’t wear them. I’ve purchased every color, brand, style, material—I cannot find panties that Fiona will wear. She goes commando most of the time.  Even if I were to force her to wear panties, she will wear me down and eventually take them off. This girl makes her own rules. I know what you’re thinking, but no, I do not purposely indulge her rules. Unfortunately, though, I’m sometimes too exhausted and beleaguered to fight her on it.

How do you punish someone who has no fear of punishment? How do you deal with a willful child? This is my journey. My pilgrimage—Learning how to take the fight out of the fighter.

I started my journey to take down a spirited four-year-old the way many parents have. I read all the parenting books—well a good chunk of them anyway. When I realized that they all contradicted one another, I gave up. The books aren’t necessarily wrong, not wrong in a way that they give you erroneous information, but wrong in that they don’t address how to diffuse everyday squabbles over a favorite spot on the couch. It’s the everyday minutiae that leads to these epic battles. And yes, at the center of these skirmishes is little Genghis Khan in a Hello Kitty shirt and her hand-me-down cowboy boots riding her ATV bare–bottomed through the house running everyone down in her way.

I talked to other parents. “What’s your strategy on dealing with fits, meltdowns and hitting?” I asked.  Again, I got lots of different suggestions and theories on dealing with a stubborn child, everything from time-outs to spankings.  When those theories didn’t pan out with my own little Stalin… I had to pull out the big guns. We talked to the Pediatrician, Dr. P.

I explained that Fiona takes me on the way an undefeated boxer goes against a new guy coming up through the ranks. She is relentless, confident, cocky, and acts with little trepidation.  She doesn’t exactly have Floyd Mayweather’s perfect record, I mean—I’ve won a few rounds here and there – but for the most part, she runs the house.  I asked Dr. P about the hitting, and she gave us a really good question to ask when we have a bout of four-year-old rage… “Is hitting (or whatever she’s doing) helpful or hurtful?” The first time we asked Fiona, it took her by surprise. “Hurtful,” she responded and began to cry. It worked for a few weeks, but like Mayweather’s Philly Shell, she figured out her opponent, and built up immunity to the question making her once again… Unbeatable.

On one particularly frustrating day, I reflected back on my own childhood, thinking about the poor-behavior coping strategies my parents used. I quickly discovered that using my parents’ methods was impossible. My hesitation to punish Fiona the way we were punished is perfectly summed up in this quote by the first Imam, Ali Abi Thalib:

Do not raise your children the way your parents raised you, they were born for a different time.

I grew up in a time when wooden spoons were the norm. Spanking and physical punishment is something my wife and I decided we didn’t want in our home long before we even had children. I must be truthful and admit that yes, there have been times I’ve wanted to swat Fiona. Ohhh yes… there have been times when I’ve looked into her defiant little eyes, black with rage, like two dark pools of fury and thought to myself—little lady you deserve a swat. But that swat wouldn’t be for her; physically punishing your child is for you. It’s what you do when you have completely lost control. It’s less about punishment and more about reprisal. But like I said, I don’t have all the answers. And if I didn’t say it yet, I don’t have all the answers. But I do know that you can’t stop your children from hitting if you’re going to hit them.

I should mention that my Li’l Keyser Soze does have moments of sweetness, extreme moments of sweetness, really. She loves to cuddle and she loves to hug and give kisses. And though she harangues her older sister mercilessly, she does not allow anyone else to do the same. Just the other day on a trip to Panda Express, Fiona unleashed her wrath on a gentleman that stood too close to her big sister at the soda machine. “You get away from her, you guy!” She yelled this across a busy restaurant embarrassing the man and forcing him to slink back to his table without his refill. She then hugged her older sister, and patted her hair as if she had just saved her from the clutches of Lord Voldemort. There is sweetness buried in all that willfulness; that is something I’m sure of.

At this point you’re probably asking… “Did anything work on this demon spawn? Was it all for not? Is he just going to raise a mean girl?” Well I’ll tell you, I did the research, and I gave every book and every parent’s advice consideration. And after all of that, the only thing I’ve found that consistently works on my petite Sith Lord is deep breathing—my own deep breathing that is. For me, it’s more about how I react to the behavior. I speak calmly and firmly. I let her know that her actions were wrong, and that they have consequences. Since starting my calm approach, the behavior has curtailed quite a bit. All I had to do is be in control when she can’t control herself. When there’s a meltdown involved, I hold my screaming child close and say, “I know you’re angry, tell me why,” all the while I’m mindful that she’s still a child and cannot express herself or her feelings the way we do. It quickly takes the fight out of the fighter. She feels listened to and loved. After being held close, she apologizes quickly and offers an apology to her sister as well. I don’t know everything about raising a strong-willed child, but I know what takes the wind out of a four-year-old’s tantrum. It takes patience, understanding and the will to communicate with someone who can’t.