Posted by Jill Wexler of Suburban Misfit Mom on November 15, 2016 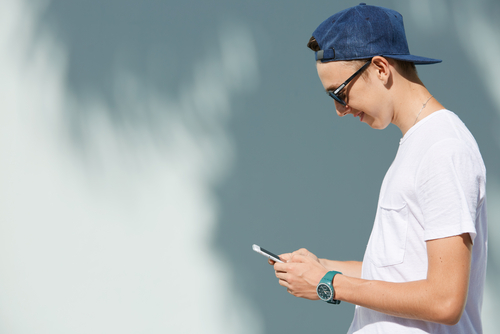 I rock at parenting.  Or I suck at it.  Depends on if you’re asking the resident 14 year-old to answer that.

I’m full of the parenting chuckles this morning regardless.  Teenagers are so ridiculous and it’s good to see that this holds true with the second kid (my first kid is a full-fledged twentysomething and that’s a story for another time).

Saturday night, the 14 year-old spawn had planned for friends to come over and bring their instruments and hang out in the garage all night.  I confess, I not only have zero problems with this, I actually prefer this because then we always know where our kid is on a Saturday night.

Literally, we could hear our kid all Saturday night.  No wondering if he was where he said he was or if he was terrorizing the villagers somewhere.  Nope, he was in our garage playing the real rock band.

In the end, it was his best buddy and a girl who showed up.

The girl, let’s call her Joanie (Joanie loves Chachie!) is a kid we’ve known since they were all in PreK together.  They attended a private school together until 4th grade, when my boy changed to the local public school.  In 6th though, Joanie also switched to the public school and they’ve had a class or two together here and there since.  So when Spawn asked if she could come play rock band with them, I was fine with it.

Truth is, I am fine with a lot when it’s on my turf.  I’ll happily deplete my checking account for pizza rolls, chicken nuggets, Oreos and Dr. Pepper to know where my kid is exactly.

Spawn had needed a 9 volt for his amp (who uses 9 volts anymore?) and when I pulled into the driveway with it, plus nourishment, he and his buddy rushed over to my car.  Joanie wasn’t here yet, so I held the battery up with one hand and my other hand pointing to the two of them.

“You two can only get the battery after you listen and agree and understand what I am about to say.”

They semi-frowned but nodded.  I put on my best Mom face.

“I don’t know if you think of Joanie as a girlfriend, a friend or just a band mate but she is a girl.  And she will be at MY house.  So MY rules will be followed by you two.”

They nodded with confusion that teenagers do so well.

“She is a girl.  Which means you will treat her with respect.  I’m not saying you can’t joke around and have fun but she is a girl.  There will be no talk of dicks, no talk of balls and no references to anything along those lines that would make her uncomfortable.  Boy talk is one thing but once a girl is around, it ceases.  Understood?”

Spawn looked appalled and his buddy sort of laughed.  I glared at him.

They both gave a loud “yes.”  The buddy said “So what if I wanted to talk about my…big………toe?”

Always a loophole, right?  I cut him off with a glare and a “nope.  And I’m not kidding.”  He nodded.

Don’t get me wrong.  I knew there would be things said and implied because they are all teenagers.  And just because she’s a girl doesn’t mean she won’t start something or say something.  In the end, there would be talk or jokes but it needed to be said so that hopefully, it all remained as tame as possible.

And all of that was just a prelude to the whole rock-or-suck-at-parenting portion of this article.

So around 10pm, the two boys came into the living room where I was reading.  My son opened his mouth and this is what came out:

“So can Joanie spend the night too?”

It took all of 3 seconds before I snorted with laughter.

“But why not?  We’re going to sleep in the garage, not my room.”

I had to laugh now.  And started out with the treat-you-like-the-adult-you-think-you-are response.  You know, when you use the voice you normally don’t use with your teenagers?

“Because I am not comfortable with that.  We don’t do boy/girl sleepovers.”

“But why not?  Her parents are fine with it.”

Yeah, I didn’t even have to ask to know that wasn’t true.  He forgot that I’ve known them since they were all 4 years old.  I still kept with the reasonable voice.

“WHY NOT?”  Spawn can be a bit slow on the uptake…perhaps a teenager thing?  And then my voice shifted to the tone he’s more familiar with.

“You guys are all teenagers.  You are boys, she is a girl.  There will be no sleepovers.”

I truly do think Spawn is still on the naïve side.  I could tell his buddy understood completely and I even think he was thinking my son was insane to even suggest such a thing.

I gave Spawn a pointed look. And the full-on Mom voice emerged.

“Do you really want to go into this with me?  Right now?  Because the word ‘sex’ is going to come up a lot if we go into this now.”

He threw his hands up in pure disgust, let out that patented teenager groan and stomped off, with his buddy right behind him.

Not fifteen minutes later, he was back.

“So if we planned it ahead of time, like in 3 weeks, would you say yes?”

See what I mean about naïve?  I think I just yelled “NO” at him and told him to stop asking because it was not happening.  And Mom-mugged him in such a manner that he stomped away again.

And here I am today, still chuckling because I remember my daughter being smart enough to never suggest such a thing but I feel like her guy friends did at least once.

But really.  That just isn’t going to happen at my house.  Silly Spawn.

Rockin’ it or suckin’ at it?