That Time I Disappointed My Daughter

Posted by Melissa Jacobowitz of Suburban Misfit Mom on May 12, 2017 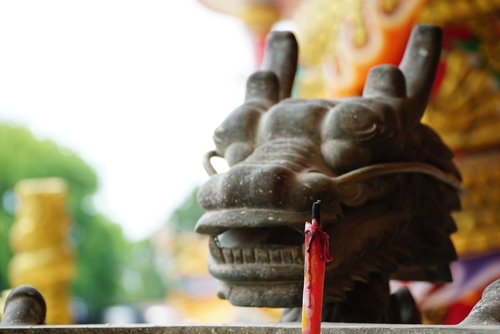 One recent Wednesday afternoon my 3rd grade daughter – I’ll just call her M – came off the bus visibly upset.  She’s a moody one, so sometimes she comes off the bus cranky and kvetchy, but this was full on misery. She proceeded to break down in tears as soon as she got in our car.

M clams up and doesn’t offer up her feelings easily – especially when asked.  In an attempt to pull it out of her, I ran down a list of questions:

In between the tears, all she kept mumbling was “It’s your fault. It’s all your fault mama…” My fault?  What the hell did I do now?

When we entered the house, we went up to my bedroom and snuggled in my bed.  She cried and cried, but at the same time, all she wanted were mom hugs – even though she was clearly upset with me.

I repeated the questions above and she spewed out the same non-answers in return.  Out of nowhere she started spelling….D R A G O N P A R A D E.   The next day at school was China Day, which is an annual event in 3rd Grade. It’s a huge day of celebration after learning all about China and it’s an awesome culmination of many weeks of effort. Part of the celebration is for all the 3rd grade kids to parade around the school, led by 9 or 10 kids in a dragon costume. These 9 or 10 kids are picked randomly – and M said, in between the tears, that she got picked to be in the Dragon Parade! Yay!

Sooo…why so sad??…… She cried “I said “no” because of you!  It’s all your fault mama…”  She declined the opportunity to be in the dragon parade.  She said “no”…. because of me? Huh?

It took me a minute or so, but I realized that she said “no” because she’d have to wear a hat as a part of the costume. And I’ve drilled into my kids to never, never, never, never wear a hat that isn’t theirs.  Because lice.  Ever since my friend’s daughter got lice from a wearing a helmet at a batting cage years ago, it’s been my crazy.

F&@%!ers – it was my fault!  She did say “no” because of me.  She said “no” because she was listening.  Listening to me.  My daughter heard my voice – as nuts as it may have sounded – and declined because it involved doing something that her mom told her not to do.   I tried to imagine how she was feeling.  She must have been so torn.  Her little innocent 9 year old brain needed to make a decision, and she made the decision to listen to her mom.    M cried that her spot been replaced already by another girl in the class.

A wave of emotions came over me.   I felt awful.  I felt proud.  I felt sad for my daughter.  I adore this little girl – seeing her this upset tore me up inside – especially because she was doing the “right thing” by taking in what I said and applying it to a real life situation.  Poor thing was only listening to her mom and I give her so much credit for that.

Should I chuck this up one to “it’s life” or “the kid has to learn” or “parents shouldn’t fix every problem for the kids”?  Is this case of “what mom says goes?” and give her a pat on the back for being a good girl?  I was conflicted and I couldn’t see this one as black and white. She was obeying our house rules and was honest.  Certainly it could be up for discussion? And for that, I owe her.

I realize this sends a mixed message for my daughter, but I bit the bullet and reached out to her teacher.

M came home really upset and I finally got it out of her that she said no to being part of the dragon. She said she got picked and said no – because of me. Because she would have to wear a hat – and I’ve drilled into the kids heads not ever, ever, ever to wear a hat that isn’t theirs. Cause lice. (I admit to being a little neurotic…)  Now, I’m quite proud that she listens to me so intently  – but wow, I’ve probably never felt so bad…   I don’t know if there is any way to go backwards and let her be part of the dragon.  It’s really all “me” and I don’t want her to miss out on something she really wants to do – especially because she was just being a good girl and listening to her neurotic mom.  Let me know what you think.

In this case, I’d let M wear the costume.  Mind you, I don’t love the idea of wearing the hat – but it is a costume worn in the school only once a year and I’ve been told that lice can stay only live for 20 hours without feeding on a human (goodness I’m going to have nightmares tonight)….I would have to assume we’d be in the clear since it’s been sitting collecting dust in a closest for a year.

Anyway, my husband took M out for ice cream and while they were gone, I received a response from her teacher that it was too late.  Her spot was given to another child and there were only so many spaces for the kids to be dressed in the dragon.  (Side note: Her teacher is as lovely as can be – she’s wonderful, easy to speak with and supportive.  Nothing against her AT ALL.)

As they walked in with ice cream goodies, I had to tell M that she could not be in the dragon parade. And the waterworks came on again in full force. She was beyond sad. (She didn’t eat her ice cream – and for those that know her, know that that’s a BIG deal!)

The girl was flat out devastated! “I don’t like you” over and over and over again – and you know what? I let it go.  They weren’t mean or snippy or out of spite.  They were said in pure sadness.  We were sad together actually.  And I may have eaten ice cream and Doritos for dinner.

M had been so excited for China Day.  She did an incredible job on her project, which was a diorama of Giant Pandas of China. She  independently researched and created everything on her own, with the exception of some assistance with crazy glue.  (I tried my best to pawn off her older bro’s already completed Mount Everest from his 3rd grade China Day four years ago, but she wasn’t having it.)  It’s one of the best feelings ever to see your kid proud of themselves.

She had been so excited – and now she wasn’t.

The next morning M put on her awesome leggings with Chinese fans on them.  She was ready for China Day. Physically anyway.  She was still somewhat “blah” when she left for school, but I had hoped she would perk up at school.  Sensing she was still a little miffed with me, I gave her the space she needed.

My husband and I (and the rest of the parents/guests) arrived around 9:45am for the start of the China Day festivities.  Each 3rd grade class performed their musical numbers (so cute!) and there was a viewing of the children’s exhibits and art work (amazing!)  This was followed by parent run craft stations commemorating Chinese traditions.  My husband and I ran the Calligraphy station and we were sweating up a storm by the time we were done!  I peeked in on my daughter as she navigated through the craft stations.  She was a full-on participant and seemed to be enjoying herself.

Then the moment was upon us – it was time for the Dragon Parade to assemble and a call was made for the kids “in” the dragon.  She looked at my husband and I with hesitant sadness.  She was “just” a participant in the parade.  She was not part of the dragon. She was not super jovial as she marched along the parade route, but she was alright.

My girl did seem relieved when the parade was over though – and so was I to be completely honest.  Luckily she is still young enough that once a situation comes and goes, it typically doesn’t sit and linger…..It was over.

After the parade, a Chinese lunch feast was served.  There were still a couple of events left on the agenda, but this was typically the time when all the parents ran out of dodge, ourselves included!   The kids went to finish up their China Day activities in their classrooms.

All in all China Day turned out fine.  M had a good day and was totally cool by the time she came home from school.  And I loved observing her and her classmates.

Still this sits with me with such contradiction.  Here’s why I bended – We talked through “why” I would go back on my word with this one.  M had told me the deal.   The communication was there.  She understood that this was not a case of a blanket “ok” to wear other’s hats; or a case of “I’ll be off the hook if I cry to mom” (about anything).  She’s a smart cookie and she gets it.

As we all know, sometimes it hurts to do the right thing.  M was disappointed –  but goodness knows that in the future there will be much tougher situations where she’ll have to make a decision.  And I can only hope she “hears” my voice whispering in her ear….even if she thinks my advice is goofy.

And I’ll be a proud mama once again.