That Whole Men are from Mars Thing

Posted by Melissa Jacobowitz of Suburban Misfit Mom on August 16, 2016 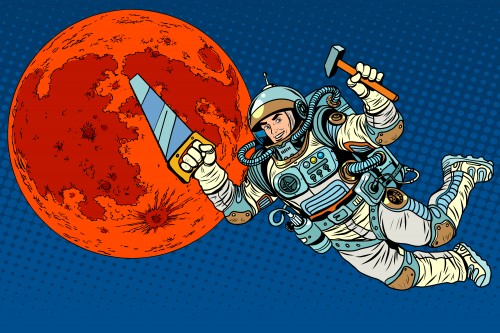 I’ve never read Men are from Mars, Women are from Venus, but my understanding is that it’s about gender differences, needs and behaviors…..and by knowing these differences, relationships and communications could be improved.

One Sunday night at around 11pm, I witnessed one of these Mars/Venus scenarios. I watched as my husband started to pack for his week long business trip to California – which he was leaving for the next morning.  Everything he needed for 5 days/4 nights fits into one carry-on suitcase.   I was in awe.

I immediately think…”Wow, it HAS to be simpler to be a man.”  Take this packing thing for example.  Did you ever notice that women take virtually the same amount of items for a one night trip or a five night trip?  I’m not referring to clothes and shoes, because that’s a conversation in and of itself – but other essentials like cosmetics, lotions, makeup remover, possibly shampoo/conditioner in case you don’t like the one in the hotel, perfume, shaving cream, etc.  I drag all of this whether I’m going for one night or ten.  And typically I’ll take more stuff with me than I use at home on a daily basis.  And whether or not I’ll use all the stuff is unanswered, but surely I need to bring it all with me.

Is it sexist to say that men are the simpler gender?  Maybe, but I’m saying that as a compliment. Why do the simple things seem just that to our opposite sex?   Do we make things more difficult than they need to be?  Don’t get me wrong, I love being a woman, but we are a complicated bunch.  Sometimes for no reason at all!  And that’s a big WE – myself surely included.

I asked my daughter (8) to give me a few differences between men and women.  She said that men get bald, scream more and like Pokémon Go.  And women like sleeping, shoes and hugs. Makes sense in our house.  Here are some further random thoughts (from me, not my daughter):

Men:  Bye.  Or maybe “See ya,” if he is feeling motivated to be wordy.
Women:   Bye!  Hugs and Kisses.  It was so great to see you and spend time catching up.  More hugs and kisses.  Circles room to make sure we got to everyone.  10 Minutes later comes back around to the first person again….and do it all over again.  And one last hug to your BFF, who you will be seeing the next day anyway.

Men:  A little stubble. Eh, no big deal.  It’s even a little sexy.
Women:  Every.  Freakin’. Day.  Even though the majority of the time no one will see the shaven areas.

Men:  I’ll have a hamburger.
Women:  Man finishes hamburger before decision is made.

Men:   Knows what he wants to buy and no deviating from that mission.  In and out and done.
Women:   Full day commitment and a few hundred dollars later.

Men:  It’s all good.
Women:  It’s all bad!  Guilt associated with just about everything – kids, family, work, eating too much and even falling asleep on the season finale of a television show.

Men:  A few group texts.  Date, time, location decided.
Women:  Everyone promises to look at their calendars.  Also needs to consider children’s sport events, birthday parties, doctor’s appointments, and other commitments.  Reconnects with group of friends and recommends meeting on August 16th for drinks.  Everyone checks calendars again. Group finally meets on November 30th, with promises not to wait so long until another girls night out.

Men: (after receiving a “look” from woman) Wha? I’m going swimming.
Women:  Tears.  How many of us have ever met a woman who is 100% comfortable in a bathing suit?

Men:    Tux rented.
Women:  Go to many stores, over many months, trying on many dresses…..all just resulting in wanting to lose many pounds.

Losing The Weight:
Men:   Ditches the carbs for a week.  Goal met!
Women:  Joins Weight Watchers and Jenny Craig simultaneously, while waiting for their Shakeology to be delivered.

Men:   Becomes more distinguished and handsome.  May lose some hair.
Women:  Chances are she will gain some of that hair that the man loses, but in odd and unnecessary places.

Saying I Love You:

Men:  I love you
Women:  I love you too.   And….waits for man to say a whole a lot more about why he loves you.   And….gets upset and disappointed when he doesn’t.  And….starts to question if man really loves her after all….

Now, I know that not all women and all men respond this way, so “No!  That is not me!” comments necessary.  Obviously this is all in fun – not to mention oversimplified and stereotyped. And if as you read through these examples and tell me that you are unable to relate at all, I surrender and apologize (just a little bit, cause a women will never admit that she’s completely wrong.)

I think it’s okay though and usually acceptable for a woman to stereotype a man – but never, ever vice versa. See?  Yet another difference.  Told you.  There’s just so much material here!  But I’ll leave you with this….I adore that men and women are wired so incredibly differently.  We take Venus and Mars, plop them here on Earth and the outcome is sometimes fun, sometimes frustrating – but overall it’s simply fantastic.