The “Art” of Girl-Teen Navigation

Posted by Jill Wexler of Suburban Misfit Mom on April 13, 2017 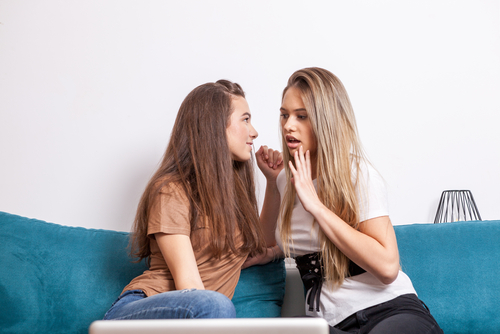 One of the bloggers I follow posted something which prompted me to remember this parenting gem from a decade ago (holy Oil of Olay, Batman…a decade).

My 13 year-old daughter and her friend, Sister Benedict, were sitting at the kitchen table, both with their phones out and both munching on pizza rolls.  I was making myself something to eat that was not pizza rolls because I was 35 and 35 year-olds are supposed to eat better than that.

Or at least make feeble attempts to.

I was vaguely listening into their conversation.  It isn’t eavesdropping when they are in a public place, not that they cared anyway.  These kids never seemed to have a problem talking in front of me, which was good.  MyGirl said something about another girl, we’ll call her LilBIT (short for Little Bitch In Training because…well, you’ll see).  LilBit apparently had trash talked MyGirl (who is my daughter, if you haven’t cracked my code yet) earlier that day.  The two girls sitting at my table began to trash talk LilBit, although I’m certain they kept it PG since I was in the room.

I kept my mouth shut for the most part, even when they tried to get me to respond to how awful LilBit was.  And they weren’t trash talking so much as rehashing every nasty thing LilBit had said and done recently.  And honestly, I never know quite what to do in that situation.  Do I give them the ol’ “now, now, girls, let’s be nice girls” or what?  I think if it got overly negative, I would have jumped in with more than the “girls can be mean, if you know this about her, then walk away” response.

Here’s the catch with parenting teens.  There’s a fine line between being the parent they sneak by and the parent that they open up to.  There’s a difference between being a parent and being a friend, but there is a small sliver wherein you appear to be both.  It’s a minefield to navigate but I’ve always navigated it because when your kid thinks you are somewhat a friend, and their friends think you are “cool,” you get to hear and see more into their world.  This then allows you to parent more effectively sometimes (although other times, you slam your hands over your ears and go “nananananannanana” because nope, did not need to hear that). But it’s tricky and I don’t advise you to take it lightly.

So I was vaguely listening when I heard Sister Benedict say “LilBit says she didn’t do that today.”

Wait just a minute.  I glanced over as MyGirl responded with some words and Sister Benedict glanced back at her phone.  And I realized that Sister Benedict was texting LilBit at that moment.

I feel I need to say that Sister Benedict wasn’t the most perceptive child.  I mean that in the best way possible, which, I know isn’t really acceptable to say, but there’s a level of social awareness that Sister Benedict didn’t always have.  She was a great kid, but easily swayed by her peers.

Because at that moment, I saw the entire big picture.  I saw what was happening and how it would end.  And I saw it because of that damned thing called “been there, done that, got the fucking Teen Girl teeshirt.”  We were all 13 year-olds at one point and some things just stay with you forever.

Like the first time your best friend screws you over.

Which was about to happen to MyGirl.

And there wasn’t a damned thing I could do to stop it.

All I could do was watch.

Segue: I admit to being more of a free-range parent, in the sense that I think experiences, good and bad, are necessary to shape your kid into the adult you want them to be (although, I’m not sure I should be set as a shining example when my Millennial just moved back home…bygones).  I was never the parent to call another parent and say “your daughter said something mean to mine and hurt her feelings.”  I received those phone calls a couple times and never quite knew what to do with them.  I wasn’t the parent who would grab a kid in the school hallway and tell them to stop being mean to their kid.  Yes, I saw that happen once and heard about it a couple more times.  I believe I’m in charge of teaching my kid how to handle what comes at her, not try to manhandle someone else’s kid. The thought of having to go up to my daughter’s law firm someday and scold a fellow lawyer for hurting my 30 year-old daughter’s feelings…well, that’s just not okay.  Am I right?

I know you’re thinking, “Why didn’t you pull your daughter aside and tell her what to do?”

Because…because this shit was going to happen again.  Somewhere and someday, it would happen again.  Perhaps it was better to let it play out here where I could pick up the pieces afterward.

Because…because what 13 year-old is going to listen?  Honestly, would she listen as I tried to tell her what her best friend was doing?

Because…because there was a part of me that hoped I was wrong and Sister Benedict would wake the fuck up.

Sister Benedict did not wake the fuck up.  She kept texting LilBit and telling MyGirl what LilBit was saying about her.  MyGirl was getting angrier and angrier.  I heard that Sister Benedict say “LilBit says you said something about me” and read the text, while MyGirl protested.

Then the doorbell rang.

No, it wasn’t LilBit, but you were expecting it to be, weren’t you?

It was a couple of the boys who hung out in their group.  The girls went outside and I sort of watched through the kitchen window as they all hung out in the front yard.  After a while, I walked out with trash for the outside can.

The boys clamored their hellos and small talk and then mentioned that they were walking over to LilBit’s.  I shrugged because those boys walked everywhere and usually ended up at my house because I am that crazy ass parent that didnt allow her daughter to wander all over town on foot, (our town is small but still these kids walked everywhere and I was never comfortable with that.)

Then I heard Sister Benedict say she was going with them.

I spun around and said ,“Hey, I thought you were here tonight.”  Sister Benedict did the whole scrunchy-face-uncertain-eyes thing and said, “LilBit asked me to come over.”

I watched them walk away and then slid my eyes to MyGirl whose expression was disbelief mixed with utter anger.  She’d been played and she knew it.  She was hurting.  Her best friend had done the impossible and joined the enemy without much argument, without much fanfare, without really any reason other than LilBit beckoned with her text messages.  I told you Sister Benedict was easily swayed.

The rest of the night was somewhat awful.  MyGirl let out her anger, cried a bit and then got angry again.  I kept my mouth shut about how I saw it coming and instead did the whole Mom thing of consoling the best I could. What’s funny is that both Sister Benedict and LilBit are still around and both are decent friends with MyGirl.  It has been ten years and yes, I do believe kids grow up.   Yes, I believe that, for the most part, kids can grow out of the ugly stripes they might have had when they were younger.  LilBit isn’t the most stable twenty-something, but on the other hand, she’s not unstable.  She’s polite and funny and seems to make attempts at being a good person.  Sister Benedict is a genuinely good person, navigating life like a twenty-something should and from my conversations with her, she is no longer easily swayed by others (it’s called “growing up).  I like them both these days.

However, looking back, I don’t think MyGirl ever really got over it.  I genuinely see that moment as The Moment when she changed from being the ever-forgiving naïve child to one who became somewhat wary of her friends in general and doesn’t forgive and forget easily.

We all have those moments that change us permanently, even if it’s just a small change.  No amount of therapy will ever erase the memory of when my friends asked me, the only driver in the group of us, to drive them to the mall, but just wanted me to drop them off, not join them.  And it’s not so much the memory itself, but that moment, that moment when a layer of wariness toward human nature built up.

And it’s one thing to have those memories. It’s another thing to watch your kid make those memories.  It is so painful to watch, worse than watching a toddler try to walk across concrete or step down concrete stairs.  It is so awful to know you cannot stop the trainwreck that is happening and that all you can do is hope that the memory made isn’t too terribly scarring.