Posted by Melissa Jacobowitz of Suburban Misfit Mom on October 21, 2016 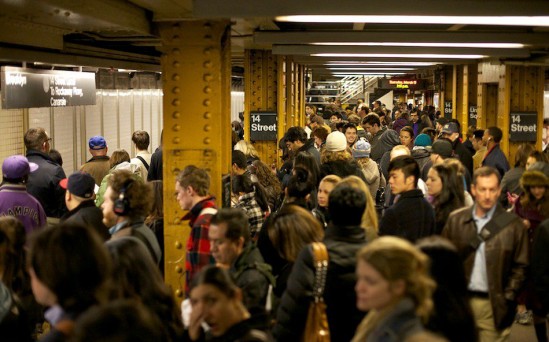 The Commuter Shuffle is what I lovingly referred to the walking portions of a long commute – walking from the subway to the commuter rail; or walking to/from the railroad station to home; or to/from the train to your car.  5 days a week with the same ol’ people doing the same ol’ thing.   You don’t know most of these people, but you recognize their faces, their backpacks and even sometimes their clothes.   Years after I stopped commuting I was introduced to one of the dad’s in my daughter’s school and automatically I realized that I “knew” him because he did the shuffle with me!  And now every time I see him I think “Really?  How do you not know me?” – we shuffled together for years!

For the past 6 years I’ve been working from home in the northern suburbs of New York City.  Every once in a while, I’ll have to head into the city for a meeting.  It’s time to shuffle!  Last week I had to go to Brooklyn, which is about 50 miles away from my home.  50 miles equals approximately 50 minutes right?  Unfortunately not when you’re dealing with good ol’ NYC commuting.  I could drive, but that might take 3 hours (no joke)…public transportation doesn’t take too much less time, but that’s what I opt for.

Sometimes I’ll even get energized by the opportunity to see my colleagues in person and head to an office – I’m going to be a real person today!  As I’m headed to sleep the night before this trip, I think that I should at least plan what I’m going to wear.  I want it to be snazzy, because ya know, I don’t get out much. I must have dozed off without determining my outfit though because the next thing I knew it was 6:45a and my alarm was going off.

Let’s Get Ready to Rumble…!

I’m such a cool and sophisticated adult, I think to myself as I hop in the car and head to the train parking lot.  Do I get coffee now?  Want it so bad, need it so bad – but no, must wait.  Cause having the pee on the commute is painful.  Also, I could spill it on myself – probably not on the black dress where you wouldn’t be able to see it – but I would spill it on my light gray wrap and be sporting that sexy coffee stain fashion statement all day.   Decision made – no coffee til Brooklyn. (Hmmm…that sounds like a song?)

When I take the train into NYC, I typically sit in a 6-seater.  Two rows facing each other with 3 seats each.  It’s pretty empty when I board so the full 6-seater was available.  I choose to near the window of one of those rows and I can only hope everyone else follows the unwritten 6-seater rules.

I feel a little snooze coming on.  This may be the only thing that I’ve missed about this commute.  It’s like the best, deepest sleep ever – and somehow most of us sleepy commuters never miss our stop.  (OK, twice.  I only missed my stop twice and I was an exhausted late-term pregnant lady.)  Opened my eyes a bit before I really start dozing and the man across from me is staring at me.  Did I not wipe away all the blush on my dress? Did I knock into your knees?  Cause, if so, you really should have followed the seat rules.   Oh, and by the way, that’s one talented cup of coffee. That darn thing is still balancing!

A quick nap and an hour later the train enters Grand Central station and this leg of my trip is over.  I head over to the subway to go to Brooklyn, which should take another half hour.  There is nothing like the New York City subway.  It really is an incredibly amazing system.  It’s a little passed rush hour and not as dreadfully crowded as it could be.  I don’t get a seat, but that’s ok.  I’ll hold the pole (and Purel my hands as soon as I get off.)  I conclude that I’m not as steady on my feet anymore, as I swayed a bit more than I used to! Again, out of practice.

I get off the subway at about 9:40a, purchase for a very large cup coffee and head into the office.  Made it.  Just about 3 hours after my alarm sounded off.  Let the day begin for real!

And…poof.  The day was done.  It was a great day of catching up with colleagues, attending a training session and learning new things.  It was quite wonderful to see everyone in person!   But now, it’s time to shuffle to the subway, shuffle to the train to my town and then shuffle to my car to drive home.   Door to door around 2 hours and 40 minutes.  Happy to be home, but I’m beat and I still need to mother the children!

They say that NYC is the city that never sleeps.  And I think that may be because it’s constantly in commuter mode!  Now, don’t fault me cause I’ve been there.  I commuted in/out of NYC for many years and I give huge kudos to the folks who are dedicated enough to continue to do so.  We all do what we have to in order to earn a living to make life better for ourselves and our families.

The face time with colleagues is invaluable and I wouldn’t trade the times where I’m able to have that experience.   But here goes – I’m 46 years old.  I’ve worked since I was 16.  I think I’ve met enough people in my professional life that I can dismiss the “face-to-face” social aspect of work!  What I mean is that although I enjoy meeting, working with and learning from new people –   I just don’t need to see them everyday –  cause this lady is tired!  The commuter shuffle is not an easy dance.  And I’m not sure these feet are made for it anymore!  My current shuffle of walking down the stairs to my little desk in the corner of the living room is too much (or too little) to give up.

So in conclusion, this lady is taking back those almost 5 hours of commute time and slipping back on her yoga pants until real life (or her boss) calls on her again….