The Day the Music Died For Me

Posted by Melissa Jacobowitz of Suburban Misfit Mom on January 6, 2017 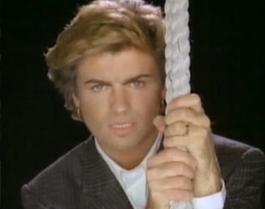 December 25th is my daughter’s birthday – more popularly known as Christmas Day, of course.   We were celebrating all the holiday occasions with my husband’s side of the family when my sister texted me “OMG did you hear about George Michael?”  Immediately I figured out what she must be referring to and I responded, “No! What? Dead?”   After she replied yes, I logged on to Facebook to see the scoop.  2 friends had already posted on my page about it.

No, no, no – this can’t be.  Devastated.  Heartbroken.  Emotional.  True feelings of sadness.  I was quite shaken.  Lump in throat.  Stopped listening to everyone and everything around me.   Later that night I cried.  Ugly girl tears.

Weird, right?  Why?  Is it that a celebrity death, especially at a relatively young age, makes you question your own mortality?   Maybe, but I don’t think that’s the case here.  What I was feeling was that I lost a piece of my identity.  I lost a piece of who I was.

He defined my teens and 20s.   He was my soundtrack.  And it wasn’t that each of his songs coincided with certain milestones in my life either, but overall his music was there every step of the way.

You’re probably thinking “Thanks (or no thanks) for the year by year rundown, lady,” but so what?   That’s just it. So what?  But it’s MY “so what?”  His music can bring me back to simpler days.  When I hear a certain song, I can feel what stage in life I was living in at the time.  From Day 1…Young Guns, Wham! Rap, etc…I followed his music, his success and even his downfalls.  Maybe I’ll never find the right words to express this without making myself sound like a weirdly obsessive psycho!  He’ll just always have a rightful place in my heart and I really did lose a piece of what makes me who I am.

He passed away on my daughter’s birthday.  That’ll be part of her birthday for me moving forward. And on the same exact day that one of my favorite buds lost her father.   After I learned that, I felt like an ass for mourning a celebrity.  A person that I didn’t know.  Why?   Could I really be “mourning” someone that I didn’t know, while my friend mourns her sweet dad?  But I was.

As the day went on numerous friends posted or texted me:

My friends and family knew that this celebrity was a part of my life.  And they checked in on me to see how I was.

I have no musical talent.   I don’t sing, I don’t play music, I can’t read music – heck, I can hardly dance to music! I attempted the flute in middle school and never, ever did I get one sound out of it the entire school year.  I can’t relate to George Michael on any level of his talent whatsoever. I’m just a fan.  A fan who grew up loving him and his music.  Music that signified my generation.

He seemed pained and troubled at times.  Drunk driving arrests, pneumonia, legal troubles, etc.  But I was always pulling for him.  In recent days I’ve read more articles about his charitable donations, including tipping a barmaid thousands of dollars because she was struggling with debt; donating the proceeds from his duet with Elton John to an HIV charity; provided money for a woman to undergo IVF treatment and volunteered anonymously at a homeless shelter.  He was a gay-rights activist and supported AIDS research and education.  The world lost another good soul…way to go 2016.

Ironically, I started a similar article when Prince died in April 2016.  I never did get around to finishing it – and George Michael’s death helped me realize why.  I didn’t have “enough.” Prince was not my celebrity.  He was amazing, talented, and all that jazz – but he wasn’t my celebrity.  So yes, George Michael was my celebrity.  I felt connected, as cornball and crazy as it sounds, and part of me is gone.  The more recent celebrity deaths of Carrie Fisher and Debbie Reynolds further solidifies this for me.  Mother and daughter dying one day apart from each other cannot be any more distressing and shocking, but for me, it’s still not as cutting as George Michael’s passing.  Because he was my celebrity.

I ended the day with this post: While I’m still celebrating my girl’s birthday, this celebrity death devastates me…..no I didn’t know him personally, but most have that one famous person or two that has a special place in their heart….many of you know that George Michael was mine. RIP George.

That headline – George Michael Dies at 53 – reads like fiction to me and probably will for some time.