Posted by Deborah Notis of Suburban Misfit Mom on September 12, 2016 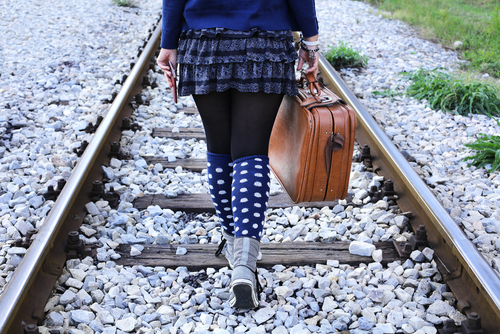 How do you tell your three-year-old that he’s never going home?

It’s September 15, 2001.  We’ve spent the past four days at my parents’ home in Westchester County, New York.  Nana and Grandpa are, as always, doting over their two boys.

But this visit is different.  We arrived on September 11th.  Straight from our home in Battery Park City.  Directly across the street from Ground Zero.  We are the displacements.  Four of the thousands who were displaced after two planes flew into the World Trade Centers and demolished our once-peaceful neighborhood.

Needless to say, our family was fortunate.  We are all alive and healthy.  We merely need to find a new home.  But our three-year-old wants to know when he is going home.

Even if we chose to do so, we could not return to live in our apartment yet.  The complex is still closed.  We do not know when it will reopen.  We returned yesterday, without the kids, to pick up underwear and various valuables.  It was surreal.  No longer the inviting, family-friendly neighborhood we called home four days earlier.  With the Twin Towers, our backyard, no longer protecting our once-sacred enclave.

We tell our three-year-old that the building is closed right now.  We are going to try to find a new home.  We are so lucky, we tell him.  We can stay with Nana and Grandpa until we find a new home.  He agrees.  He loves staying with his grandparents.  But he is still confused.

His friends, other Battery Park City refugees, tell him that there were fires and that our home was hurt.  He becomes frightened and begins asking about returning to our home on “four” – the fourth floor – more frequently.

Once again, we try to reassure him.  The “old house,” as he renamed it, is fine.  We just think that it would be better to live closer to Nana and Grandpa.  We name his displaced friends who will be making their home within twenty minutes of us, trying to convince him that we will have a great time living here.

Should we take him back to Ground Zero to show him that the apartment is still standing?  We are concerned about the air.  And the missing towers.  Our three-year-old used to play inside the concourse of the World Trade Center.  It was our mall, complete with the Gap, Banana Republic, and our favorite daily indulgence, Krispy Kreme Doughnuts.  We were on our way there when the first plane hit.

If we take him back there, will he notice that the towers are missing?  Will he recall me running along the promenade, screaming, “excuse me” to clear the way for the double stroller carrying him and his six-month-old brother to safety?  Will he be more frightened after he visits than he was from the uncertainty of not seeing “four?”

We ask various experts, friends, and family members.  How can you simplify the concepts of terrorism and suspicious air quality to safely enlighten a three-year-old about the events of September 11th and about how these events will impact his future?

The consensus is split.  Some think that the visit will bewilder him.  If he sees that the “old house” is okay, then he might be even more confused as to why we are moving.  Others think that he is too young to truly understand the events of September 11th.  He’ll forget about all of it if we, the adults, just move on in a positive manner.  We are told to make him feel as secure as possible.  If that doesn’t work, our pediatrician suggests that we try play therapy.

It’s September 21, 2001.  My husband and I are back at Ground Zero.  Once again, we are there without the children.  Escorted by the National Guard, we have another fifteen minutes to throw our lives into a bag and run.

But this time, we are able to return to my parents’ home with a great surprise for our boys.  We were able to take our green Honda Accord – the “green car,” as our three-year-old affectionately refers to the auto – out of the apartment complex garage and to drive it back to my parents’ home.

When we arrive home, our older son is waiting in the driveway.  “The green car,” he yelps.  “Look Grandpa, I told you nobody would hurt the green car,” he continues, obviously attempting to reassure himself.

In our trade center free, shiny green car, we head off to lunch.  We park the car.  As we walk towards the restaurant, a man passes us in the opposite direction.

Our son stops and watches the man.  We ask why.  “I don’t want the man to hurt the green car,” he tells us.

It’s January 20, 2002.  A month ago, we packed up the old house and the green car, moved out of my parents’ home, and moved into the “new house on five.”  The displacements have found a replacement.  Our three-year-old is pleased with his new surroundings.

It is eight o’clock in the evening.  We are all lying in our bed, reading a story about a mouse and a cookie.  We are laughing.  “But when are we going back to the old house?” he asks, completely out of context.

He asks this question almost every day.  We respond as we always respond.  Neutrally.

We explain that we are all living at the new house now.  “You like the new house, right?”  He affirms.  We explain that we moved out of the old house so that we could have a bigger house.  One that is closer to Nana and Grandpa.  One that is closer to the new school that he loves so much.  And then, for the first time, we ask him why he wants to go back to the old house.

“If we could get the green car back, why can’t we go back to the old house?” he asks.

Our son is pleased with that response.  He closes his eyes and goes to sleep.  And doesn’t ask about the “old house on four” for almost an entire week.  Progress.

Published in 2002 by CHILD MAGAZINE as Six Months Later.  by Deborah Raider Notis