The Ghost, The Girl and The Heart

Posted by Michael Badger of Suburban Misfit Mom on January 12, 2017 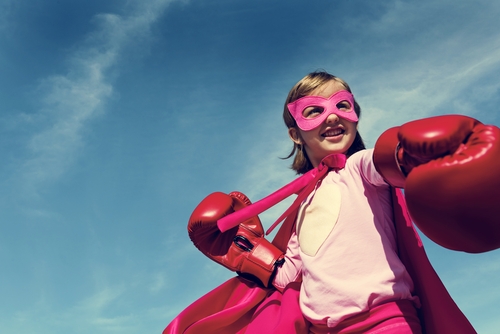 “Daddy, why do they call him the ghost?” My daughter asks in between handfuls of popcorn. “Because one moment he’s there and then he’s gone–like a ghost.” I explain. “Watch how elusive he is,” I say. Watch his head movement.” Five-year-old, Fiona likes this explanation. She nods in approval.

Robert ‘The Ghost’ Guerrero is fighting the undefeated Danny ‘Swift’ Garcia, one of the best boxers in the welterweight division. As I watch the under-card fights leading up to the main event no one shows much interest in what’s going on. My daughters busy themselves with squabbles over seating arrangements and who has the bigger bowl of popcorn. It’s not until the announcer discusses Robert Guerrero’s wife battling cancer do they show interest. “Oh no!” Nine-year-old, Emmylou gasps. “What’s wrong” I ask. “It’s so sad… His wife…” she manages to eek out, “He’s fighting for her. This fight is for her.” Clearly this isn’t the regular boxing talk at my buddies Saturday night boxing group. Watching boxing with my daughters is a much different experience. It has changed how I think about boxing. Well, they have changed how I think about everything.

Robert Guerrero comes out strong in the first round, firing away at Swift’s body. He wants to land something big. The fight is fairly equal but by the 6th round Robert Guerrero begins to fade, he is losing rounds now. It’s the 12th round and The Ghost goes for broke throwing everything he has. It is a war. It’s not enough though; Robert Guerrero loses to Danny Garcia by decision. “What will happen to him now that he lost,” Emmylou asks. “I don’t know.” I say. “It’s different for every fighter. Some losses strengthen a fighter. Some losses break a fighter. Guerrero is getting up there in age… So I guess we’ll see.”

Watching boxing with my daughters is different than watching with friends, and watching boxing with each daughter is different too. Both daughters have their own microcosm with which they watch it. Fiona, never asks why they fight. She likes the action. She gives thunderous applause and hollers at the TV. She wants to know who I think will win. She wants to know why I think Robert Guerrero is the better fighter. She wants to know why they call hugging a clinch. She delights when I refer to her as my southpaw. We play fight in the living room and I show her how a lefty stays away from an orthodox fighter’s right hand. She waits and listens to the announcer when they introduce the fighters. ”He’s a lefty,” she shouts when they announce Robert Guerrero. “Just like me,” she says punching me hard in the arm a few times.

Emmylou wants to know why there aren’t more female fighters. She is concerned with the families of the fighters sitting close to the ring. She asks the moral questions. She wants to know if I cried when Manny Pacquiao was knocked out by Juan Manuel Marquez. She asks do the fighters feel alone. The fighters aren’t alone I assure her. “That’s his corner” I say as our fighter’s team rushes in after the bell. I explain that his trainer will talk to him, he will tell him he is doing well. His cut man will stop the bleeding over his eye. He will place an ice bag on the back of his neck to cool him down while his trainer reminds him to breathe. Now he will tell him what to do in the next round. He will tell him he needs to land something big so the other fighter will respect him. He will remind him to use his jab.

Fiona prefers the heavy hitters like Luis Ortiz while Emmy prefers the boxers. Emmy admires fighters like Keith ‘One Time’ Thurman, Errol Spence Jr. and Roman ‘Choclatito’ Gonzalez. She likes the speed and accuracy of their combinations and footwork while Fiona likes to watch fighters like Sergey Kovalev and Gennady Golovkin knock a fighter down with a jab.

Watching the fights with an empathic 9-year-old has opened me up to caring about these fighters. She humanized them for me. Before my girls took an interest in boxing I saw a fighter’s stats first–21 Wins, 13 by knockout. Now I see a fighter’s history; where he came from and how far he has come. I wonder what happens to them when they stop being great. When they are beaten and become mortal again.

In the days leading up to the Amir Khan and Canello Alvarez fight we watch many youtube videos. Both girls like Khan’s flamboyant style and swagger. On the night of the fight I assure them Khan has a good chance of winning even though he had to move up a weight class. The amount of combinations that Khan will throw and the speed at which he throws them could easily earn him a win on points. That is if he stays away from Canello’s power, I warn.

I leave the girls watching the prelim fights on an iPad and go to a friend’s house for our regular Saturday fight night. My girls watch the fights from home texting me intermittently about which fighters I like. As the main card is about to start Emmy texts me, “Fiona fell asleep but I’m watching. I hope Amir Khan wins!”

Early on in the fight it is painfully clear that Khan is not prepared to fight Canello Alvarez. Khan’s smaller frame compared to Alvarez’s larger frame and power is unsettling. At the end of the fight I get a text message from Emmy. “He’s not getting up, Daddy.” “Amir’s speed was no match for Canello’s power.” I text back. When I get home I sit on the edge of Emmy’s bed. She stirs and looks up at me, “Daddy, Amir Khan got knocked out.” I know, but he’ll come back stronger.” I say. “Daddy, my heart hurts for him.” She whispers. Just a few months ago I would have pointed out that Amir Khan still made millions of dollars for the fight. Now I look at my daughter and I whisper back, “My heart hurts too.”

It took me the better part of 40-years to feel compassion for these warriors. To wonder what the morning after a defeat feels like. These men go to war in the ring, not just for our entertainment, but to show the world what it means to be the very best. What preparation and hard work can do. They show us that a fighter can come from any background; a metropolitan city or a small town in Mexico–and still become the best in the world. Boxing allows all men to become equal, and then with grace, speed, power, agility and determination, allows one man to be the very best. But there is always a cost. The body, the mind, the reputation… everything hangs in a delicate balance. It was my daughters who showed me how tenuous these men’s grip really is.

The next morning we walk out into the cold garage for our Sunday morning boxing ritual. All the boxing I watch is prelude to these few moments with my daughters. I wrap their hands and take them through a warm up. Five-year-old Fiona is already throwing wild hay-makers dangerously close to my pelvic region. We finish warming up and then hit the heavy bag. Fiona punches herself out quickly and flees back to the warmth of the house.

Emmy stays with me. I put on the mitts and we get in our makeshift ring. When she’s paying attention she’s precise. Her giggles disappear and she concentrates on cutting off the ring. She keeps the mitts at bay with what some might see as an adorable little jab… What she’s throwing though is well placed and could easily land on her opponent’s chin. I instruct her on stepping around. I throw a few slow hooks and she easily slips and parries them.

She is small for her age. She is gracious and kind and shy. She does her best to blend into the background–but when I wrap her hands up she is confident–poised. Her face is determined. She hits the mitts and takes direction. One, two. One, two, one. One, two, hook, uppercut. She punches until her arms begin to burn and become heavy… “This must be how the 10th round feels.” she says quietly. I help her pull her gloves off and she looks at me. “Do you want me to fight someday,” she asks. “I think you’d be an amazing fighter. But no, I don’t want you to fight. I only want you to do what fulfills you and what makes you happy.” “Training makes me happy,” she says. “Me too,” I say handing her a jump rope. “So let’s train.”